7 dead; several injured in B-17 crash at Bradley Airport

WINDSOR LOCKS — Officials say seven people have died and several are injured in the crash of a B-17 at Bradley International Airport. Bridgeport Hospital ... 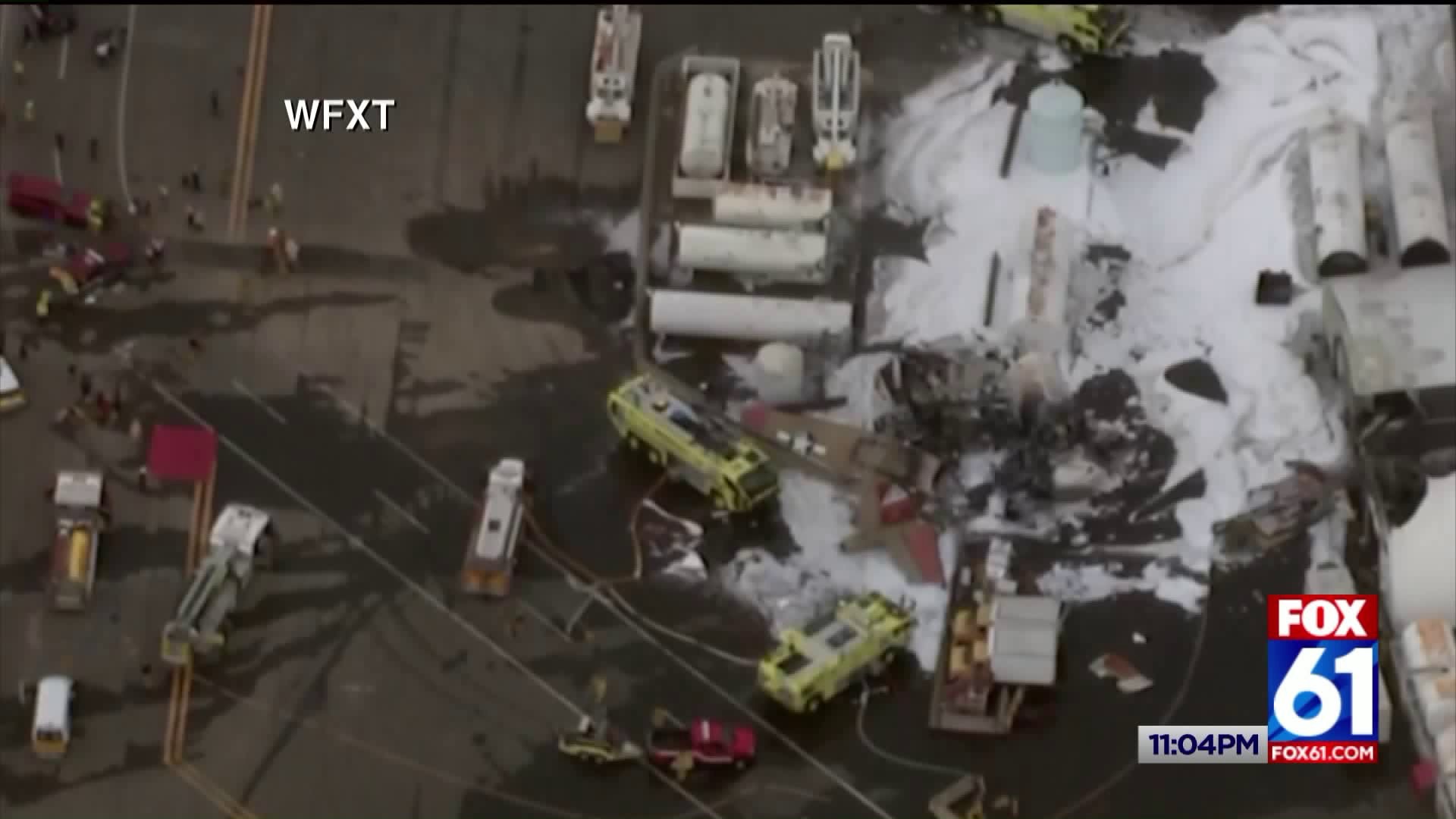 WINDSOR LOCKS -- Officials say seven people have died and several are injured in the crash of a B-17 at Bradley International Airport.

Bridgeport Hospital said they have three patients -  one with serious injuries; 2 with minor injuries - all with burns and multiple fractures.

In a press conference held Wednesday evening, NTSB Board Member, Jennifer Homendy, said there were 10 passengers on the plane and three crew members.

Homendy said the NTSB will be on scene for the next 7-10 days and a probable cause of the plane crash will take time.

No children were involved, according to officials.

You can watch the full press conference below: 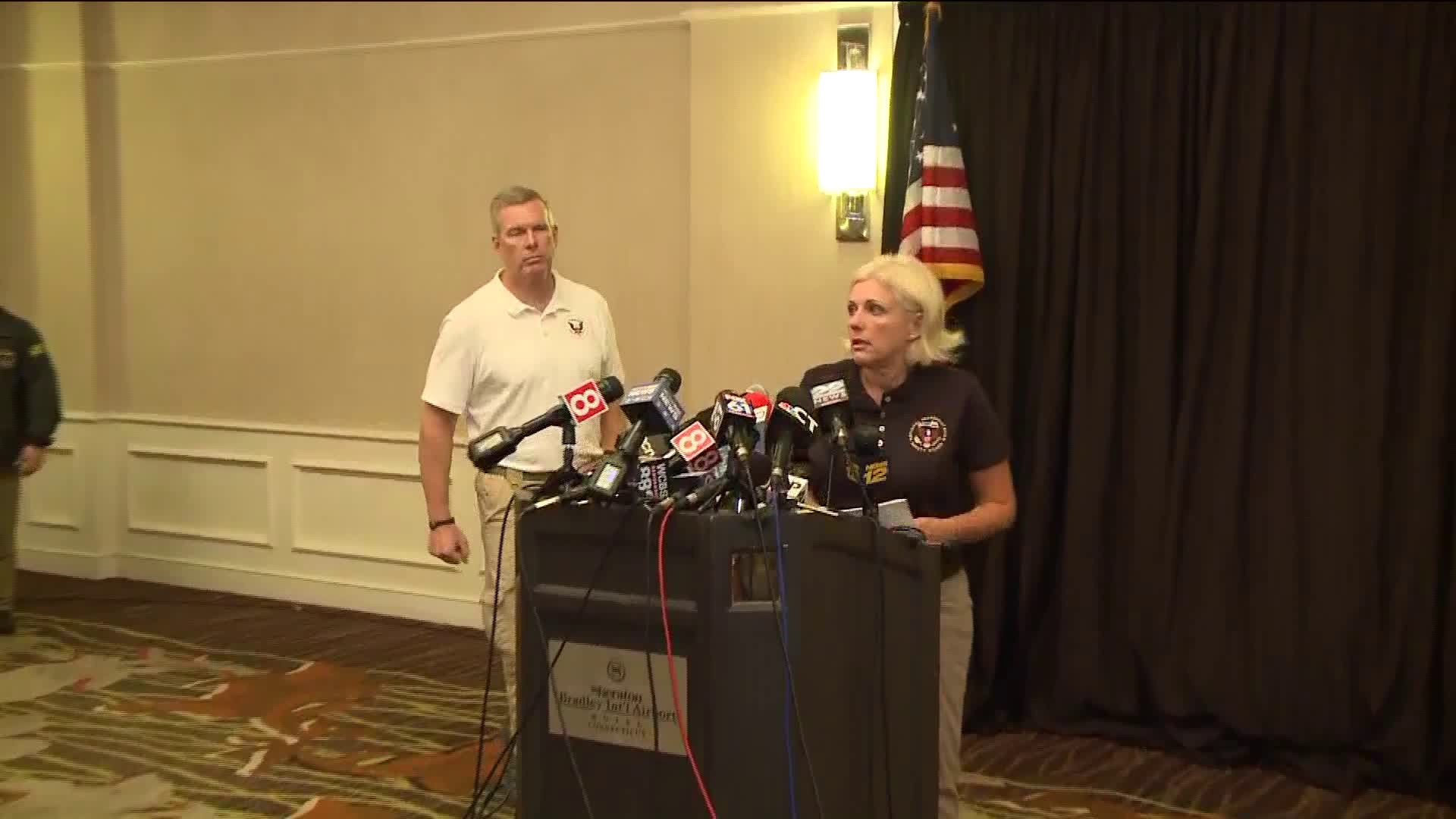 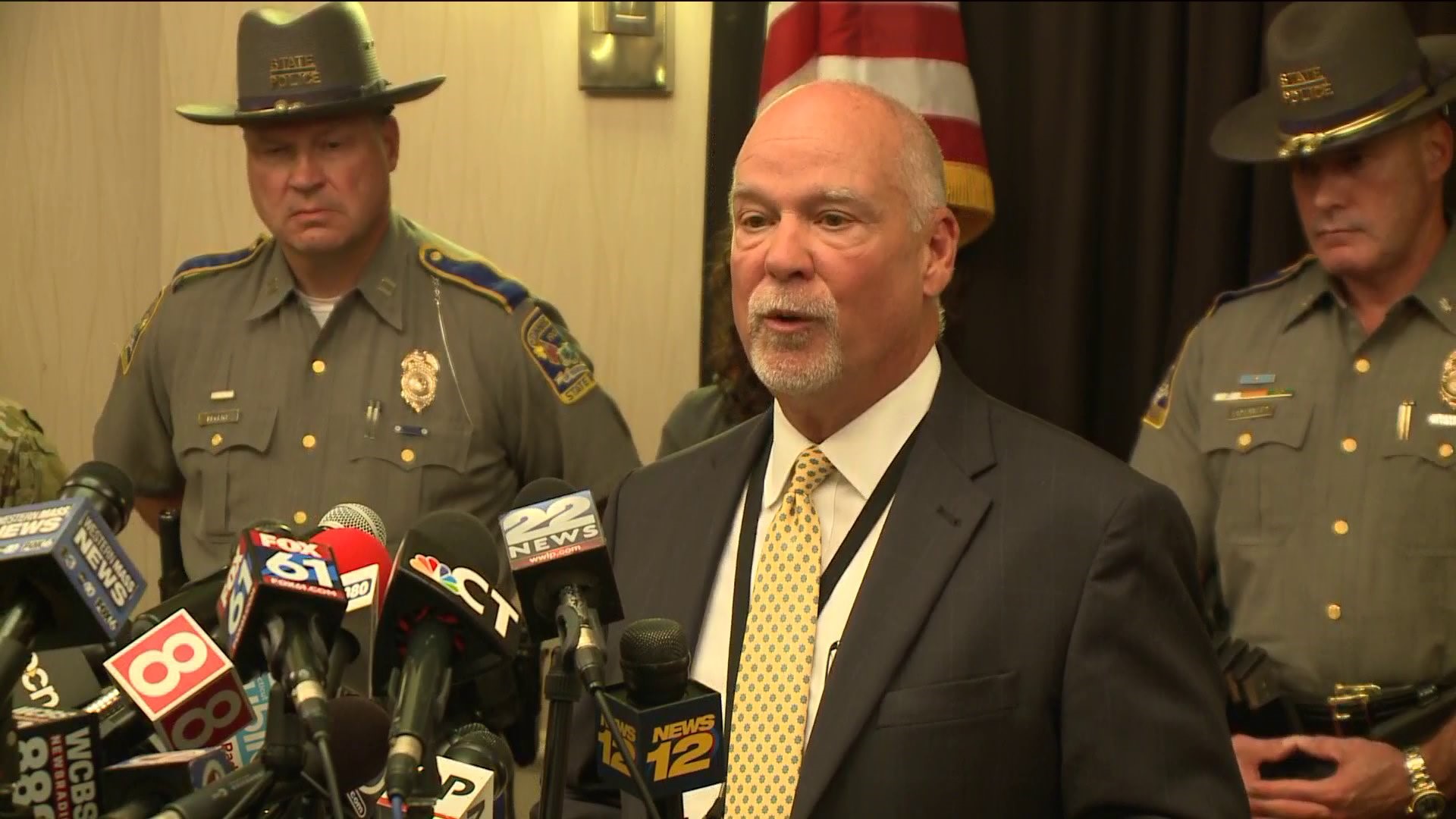 FOX61's Carmen Chau spoke to David Prescott - a retired Collings Foundation Pilot who knows the pilot that was in the crash, where he commended his years of experience. 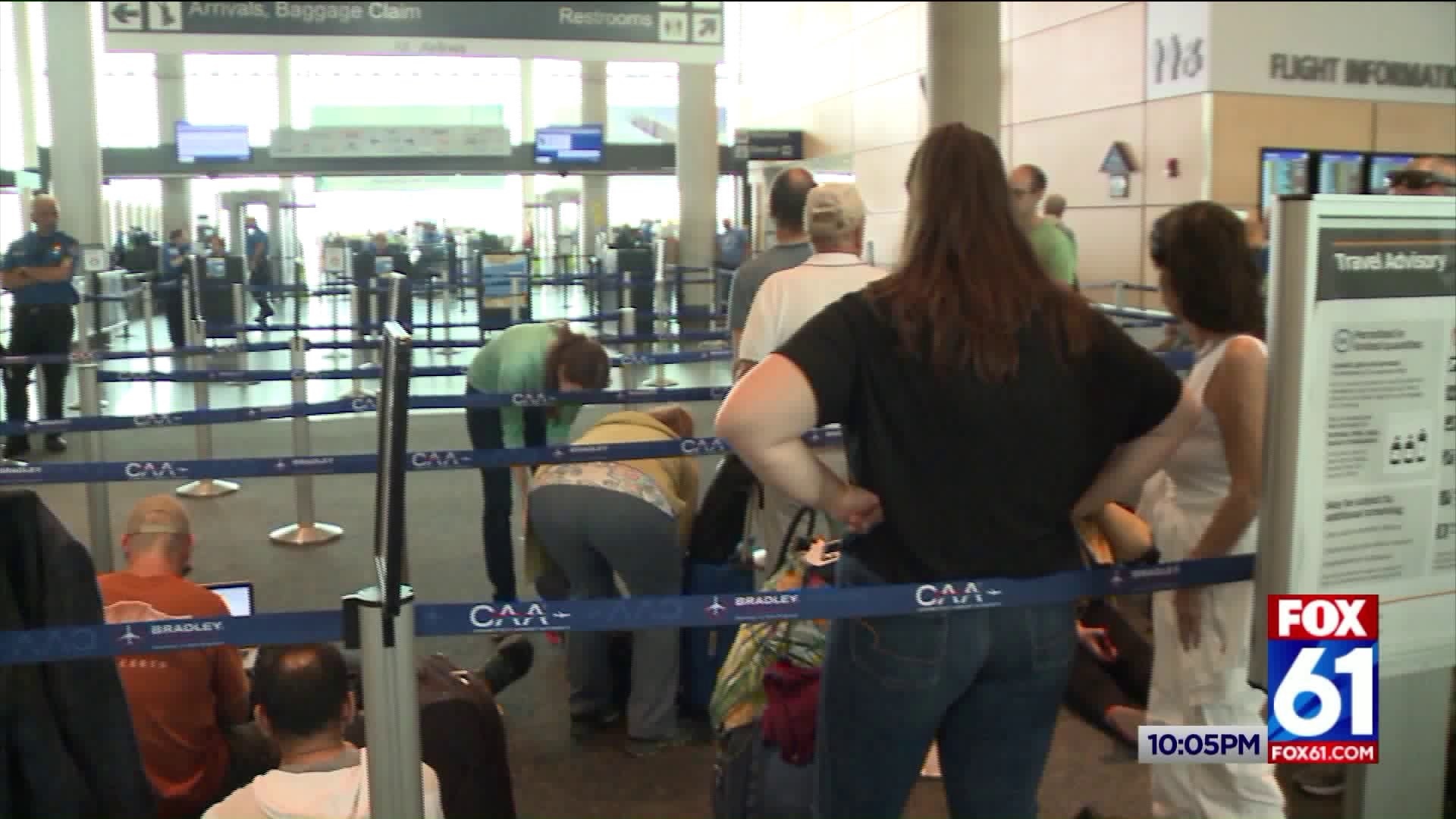 "I believe he's probably the highest B-17 Pilot out there," said Prescott. "In addition to being an airline pilot, he was a very very well trained pilot with a very high degree of safety training on a regular basis."

Prescott emphasized passengers should not be scared of taking these flight tours despite what happened — citing a worst case scenario like this one is slim to none.

"The Collings Foundation has a very extensive safety program," said Prescott. "They have a maintenance crew that travels with the planes."

Two members of the Simsbury Fire Department were on the plane, they survived the crash and were brought to area hospitals.

The plane took off at 9:45 am. shortly after that it radioed that there was a problem, which witnesses described as an engine failure. The plane was cleared to land on Runway 6 and crashed at 9:54 a.m. according to officials. The de-icing facility and maintenance facility were damaged as the plane came to rest.

Listen to the radio transmissions as the pilot of the B-17 requests to return to the airport and report a problem with engine #4. Courtesy LiveATC.net.

It's unknown whether the plane had a flight data or voice recorder.

A solemn sounding Gov. Ned Lamont, said our hearts are broken and he wants to let the families know in a timely and honest manner.

Family members of victims are asked to call 860-972-9166. State police said people can call 860-685-8190. They can come to the Taylor conference room at Hartford Hospital Cancer Institute.

The NTSB is asking anyone with any information to email witness@ntsb.gov.

The town of Windsor issued a warning about the potential release of firefighting foam into the Farmington River that could lead to health concerns.

The Salvation Army’s Emergency Disaster Services arrived on scene to provide meals, hydration and other basic support to the first responders.

A health advisory has been issued for potential discharge of firefighting foam into the Farmington River originating from the Bradley International Airport emergency incident today. Details here: https://t.co/PV0BIRzGT7 pic.twitter.com/2pS4sMrZAM

The airport has since reopened.

The FBI is on site with  evidence crews in addition to the Connecticut State Police on site.  The National Transportation Safety Board will investigate for cause and origin.  According to Senator Blumenthal, at least eight people from the office of aviation safety.

The FAA confirmed that airport officials have closed Bradley International Airport, and the FAA has put in a ground stop for flights that are destined for the airport. "A vintage Boeing B-17 crashed at the end of Runway 6 while attempting to land at Bradley International Airport in Windsor Locks, Conn., at 10 a.m. It is a civilian registered aircraft, not flown by the military. Local officials will release information about the people aboard. We will update this statement when we get new information," said the FAA in a statement.

A witness, Brian Hamer,  saw the plane take off, and the plane did not climb very high. He saw the number 3 engine fail and then the plane return to the airport. Moments later he heard a crash and saw smoke.

Bradley Airport tweeted: "We can confirm that there was an accident involving a Collings Foundation World War II aircraft this morning at Bradley Airport. We have an active fire and rescue operation underway. The airport is closed. We will issue further updates as information becomes available.

The Collings Foundation had brought several planes to Bradley this week, including  the B-17G that crashed. a B-24 –Liberator,  a B-25, a P-51 - Mustang fighter,  and a P-40 Warhawk. Rides on some of the planes were available to the public.

I am grateful for the first responders for their rapid response. NTSB has informed me that they are sending a team to investigate the incident.

“Our hearts go out to the loved ones of the victims. They and the public deserve to know the facts and causes of this tragic crash. I am calling for an immediate National Transportation Safety Board investigation so we can get to the bottom of what happened and prevent future tragedies. The NTSB should be on the scene as soon as possible, with assistance from other agencies like the FAA.”

The foundation issued a statement:

Our thoughts and prayers are with those who were on that flight and we will be forever grateful to the heroic efforts of the first responders at Bradley.

The Collings Foundation flight team is fully cooperating with officials to determine the cause of the crash of the B-17 Flying Fortress and will comment further when details become known.

According to news reports at the time, the same plane made an emergency landing in 1995.

We can confirm that there was an accident involving a Collings Foundation World War II aircraft this morning at Bradley Airport. We have an active fire and rescue operation underway. The airport is closed. We will issue further updates as information becomes available.

Check back for more details as they develop.

A viewer sent in a photo of smoke near the scene.

7 dead; several injured in B-17 crash at Bradley Airport 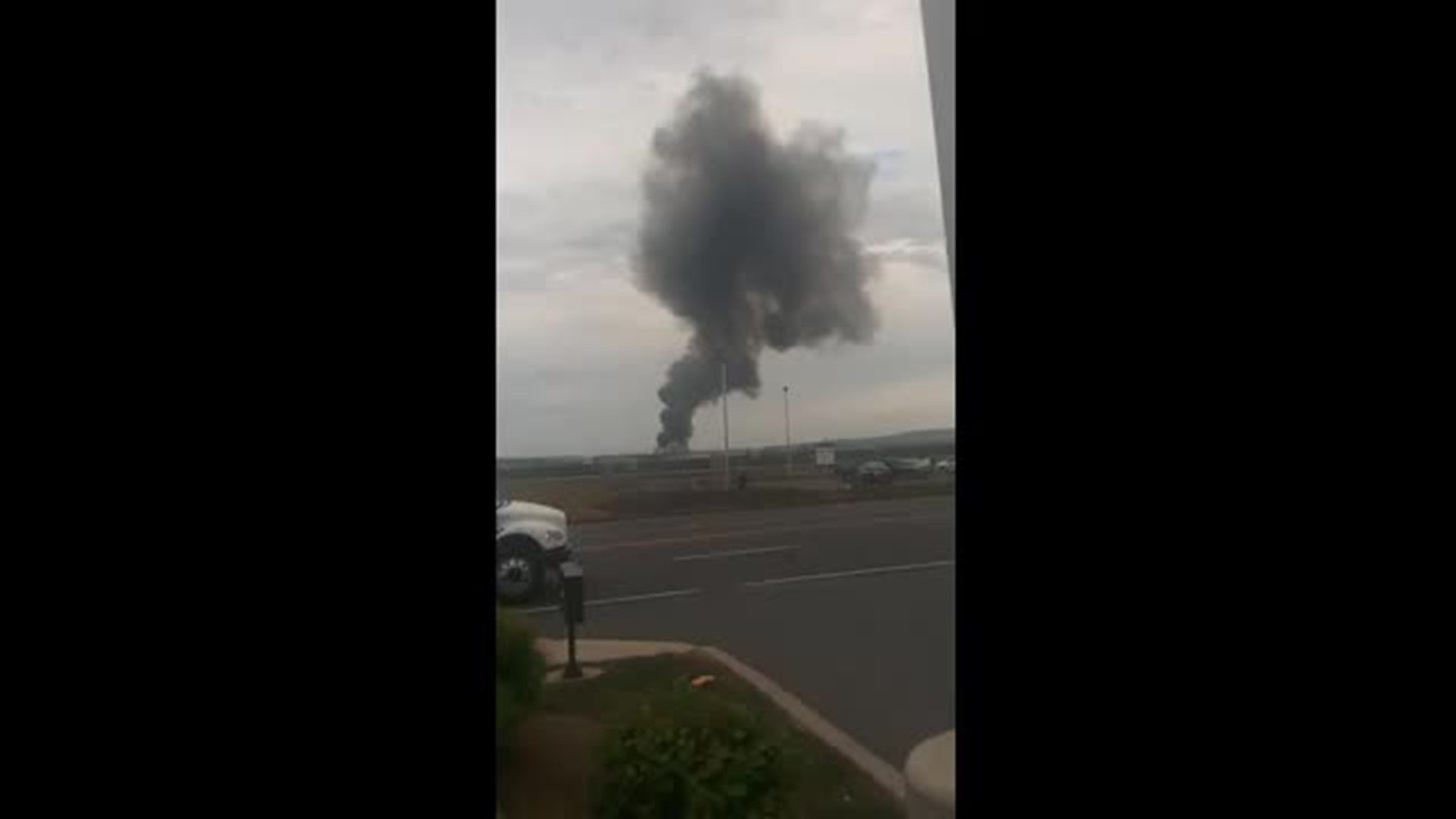