BRIDGEPORT – Arrests were made following a memorial for a teen killed in a police-involved shooting two years ago. Thursday marked the two-year anniversar... 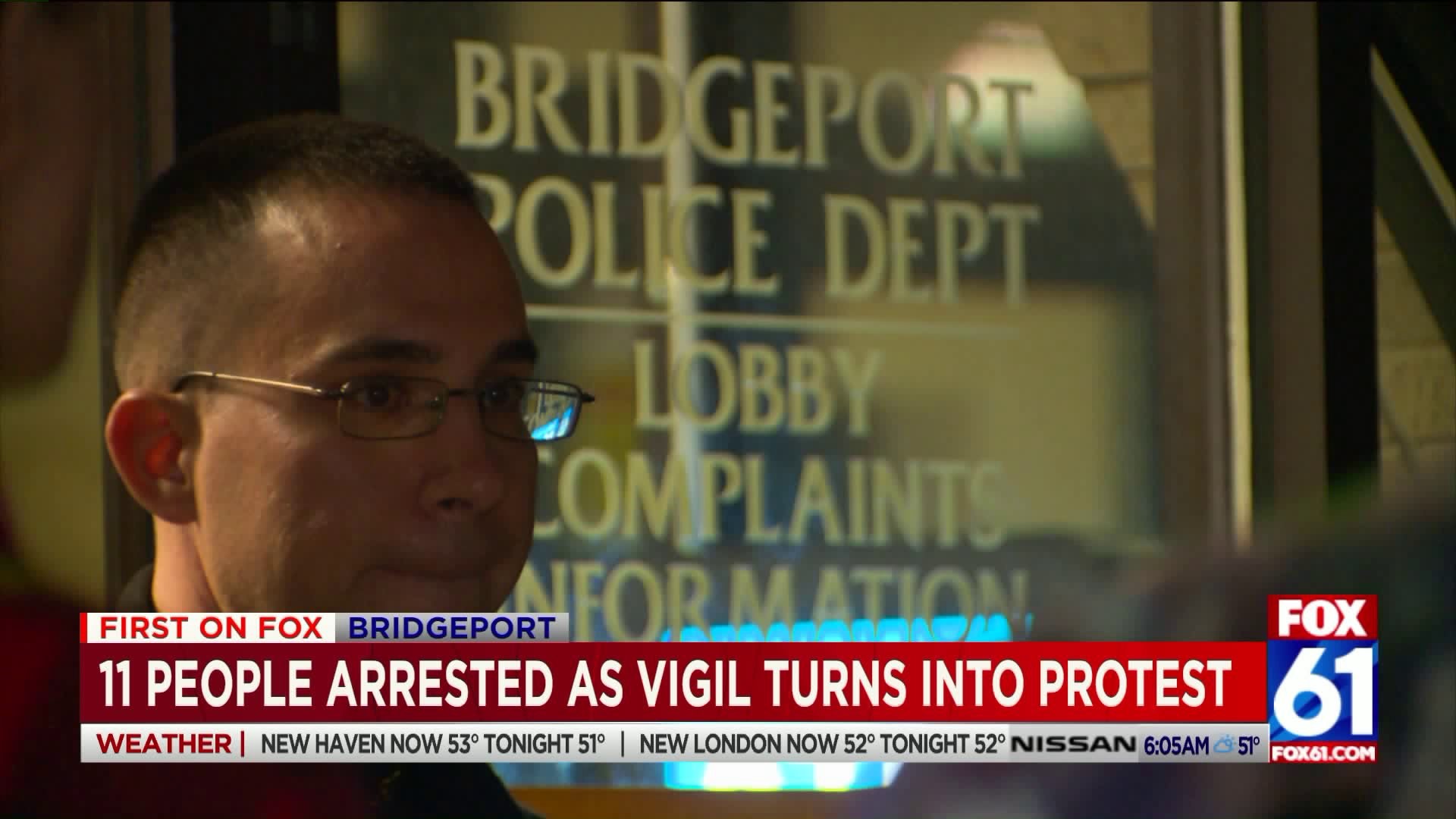 BRIDGEPORT - Arrests were made following a memorial for a teen killed in a police-involved shooting two years ago.

Thursday marked the two-year anniversary of when 15-year old Jayson Negron was shot and killed by police in Bridgeport.

Eleven people were arrested following demonstrations after the vigil for Negron. Crowds gathered outside the Bridgeport Police Headquarters demanding they be released. The police department was on lockdown. One of those arrested was Kerry Ellington, a leader of Black Lives Matters.

Tara O'Neill, a reporter for the Connecticut Post, was detained by police and released a short time later.

According to Chief of Police AJ Perez, police "did not want to arrest anyone, but public safety is paramount." He also said he heard back from officers on the scene who said bottles were thrown at them.

According to an arrest log of that night, charges to those arrested include: interfering with an officer, criminal trespassing, risk of injury to a child, disorderly conduct, and inciting a riot.

I was released after being handcuffed, put in the back of a cop car and taken to booking. The officer who arrested me profusely apologized and said he didn’t know I was the media. I was not charged. I was not put into a holding cell. Others arrested were. #Bridgeport 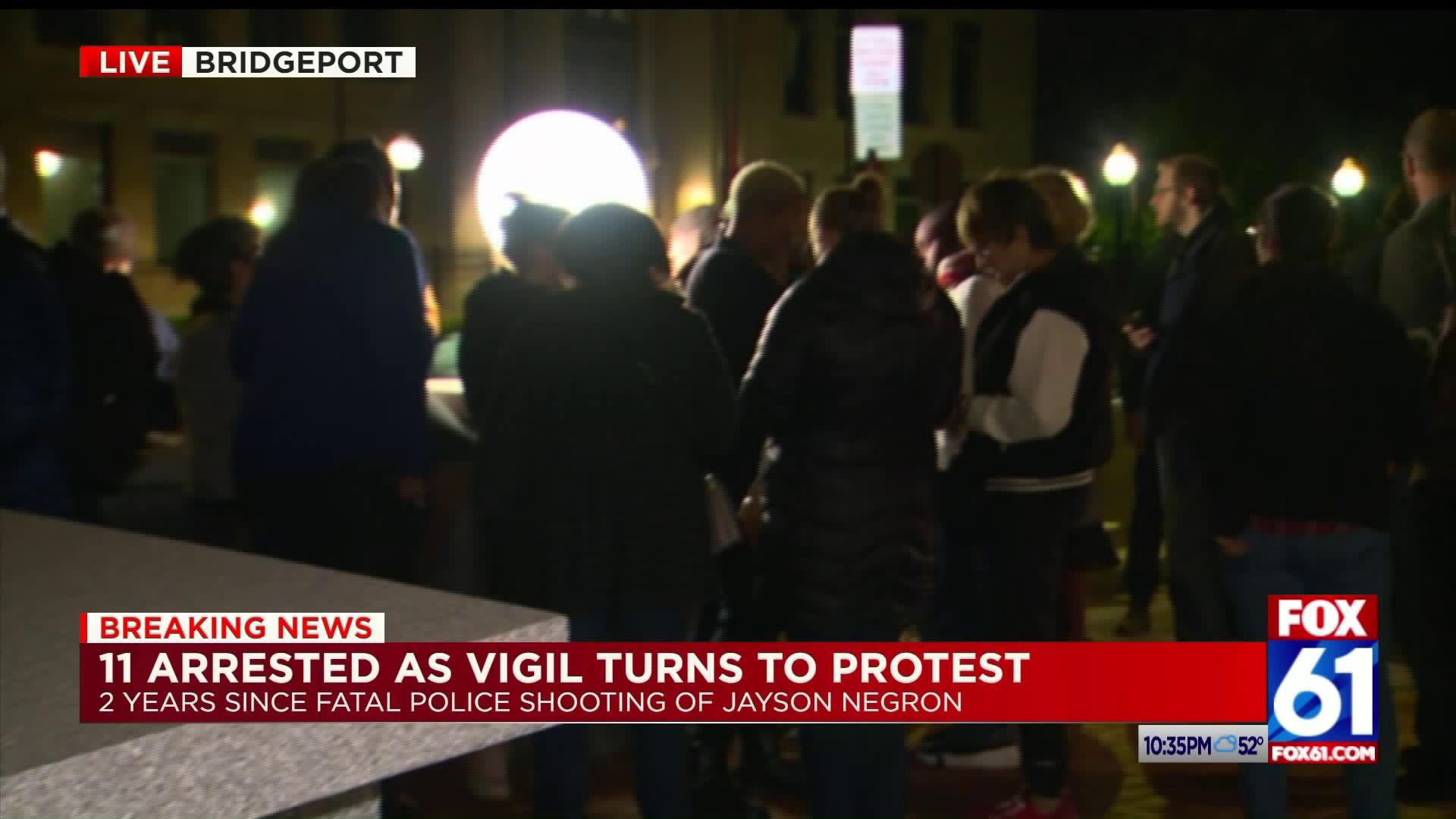 That shooting was ruled by the Waterbury State’s Attorney as justified.

Friends and family set up a memorial to remember Negron and to send a message about the recent police shootings in Wethersfield and New Haven.

Negron would have turned 18 years old this year and also graduated high school. Family members told FOX 61 instead of celebrating with him, they are celebrating in honor of him.

“The world just went by after that happened. He was 15. His entire life was taken from him and there’s something vicious about our world it could just go on, said Jeannia Fu of Justice for Jayson.

Negron was shot and killed by Officer James Boulay on May 9, 2017.

For months, community members demanded answers as to why Negron’s lifeless body was left on the street for hours.

It was just last year when a 21-page report was eventually released by the State’s Attorney concluding Officer Boulay’s actions were justified.

“I think that any officer that’s involved in any shooting should be immediately fired and there needs to be a complete change in so many different areas,” said Melendez.

Negron’s picture was displayed next to others - all of them were killed in police shootings in recent years.

Melendez touched on the recent police shootings in Wethersfield and New Haven.

“There is a serious epidemic of police brutality that needs to end and people need to be aware of what’s going on,” added Melendez.

The family also held a graduation party for Negron before setting up the memorial.

Police had Fairfield Avenue shut down until the crowd cleared.