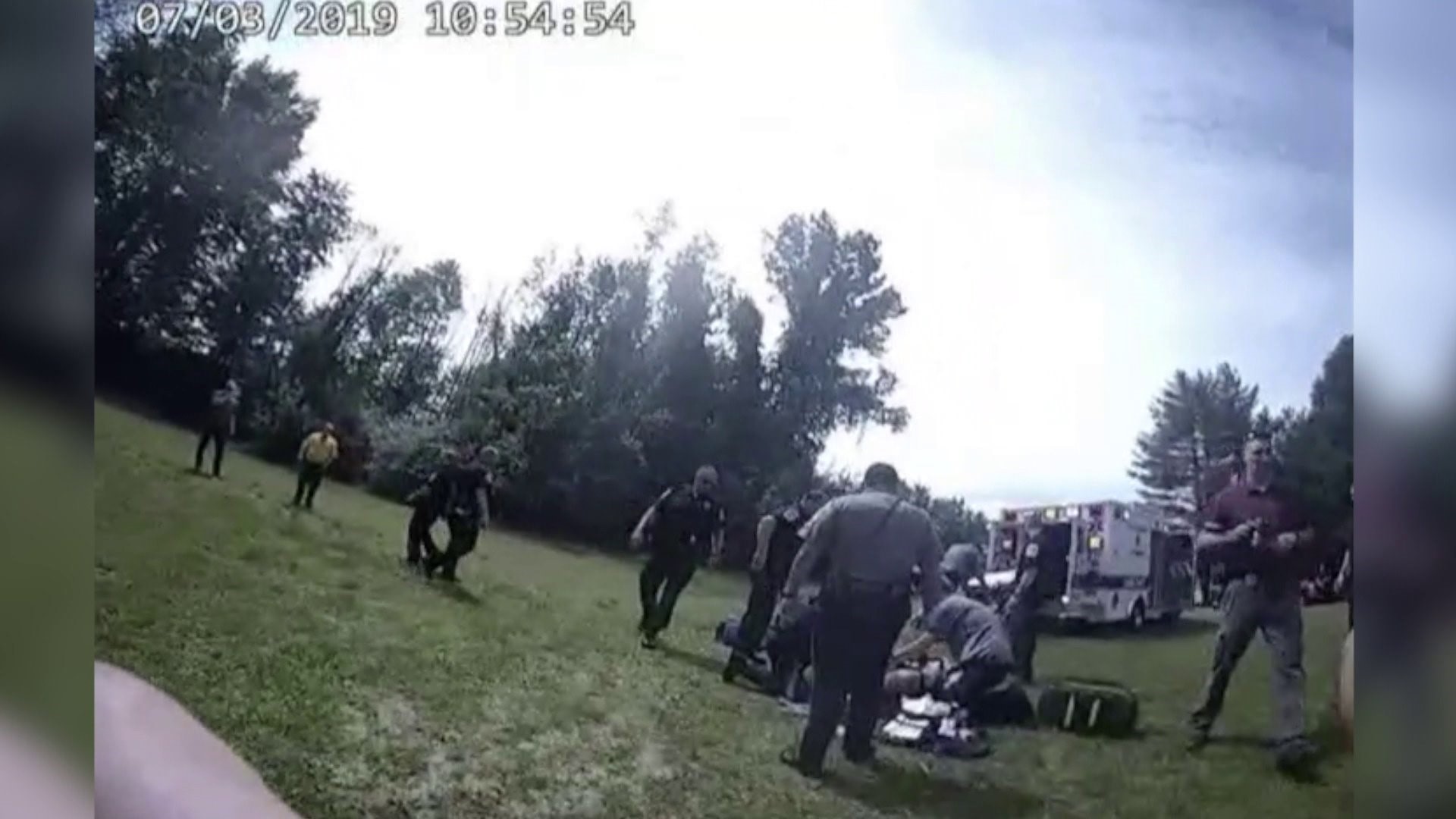 Aaron Bouffard, 31, was arrested and charged in connection to the incident.

Police said before Bouffard was shot by a Danbury officer, he allegedly got into a fight at a private provider for substance abuse and prevention services. After the fight, police said Bouffard fled the building into a nearby field and was later shot by the officer.

Police said he had two knives and was shot after refusing to drop the knives. Bouffard was treated at the scene and taken to the hospital. He was conscious and speaking at the time.

In the newly-obtained video, a trooper is seen running with another trooper's body camera that had fallen off his uniform. The state trooper did not shoot Bouffard, but was present when the shots were fired by the Danbury officer.

Brian Foley, who now works for the State Department of Emergency Service and Public Protection, tells FOX61 Connecticut State Police have realized that cameras falling off of troopers has become a problem.

“The below information is preliminary, and the best information available at this time. Please remember that this investigation is ongoing, and preliminary information is subject to change. However, keeping with our goal of transparency, it is important for us to get this preliminary, best-available information to the public as soon as possible:
In our continuing efforts to increase and improve transparency following police involved shootings, we are providing this update to the Danbury case from July 3rd, 2019. During the preliminary investigation of the shooting, it was discovered that a Connecticut State Police Trooper responded to the scene and was present during the shooting. That trooper was wearing his CSP issued a body worn camera.
According to his report, after the trooper responded to assist Danbury Police, he exited his cruiser and joined the search for the suspect on foot across different terrains. When they encountered the suspect at the soccer field the trooper “…went to activate his body cam and realized it was no longer attached via magnet to the front of his uniform”
Following the shooting, a second trooper who responded to the scene found the camera in a field of tall grass near the trooper’s cruiser. She picked up the camera, activated it and brought it to the scene, giving it back to the trooper.
The video from the dislodged CSP body worn camera is being released. No other troopers were with Danbury Police during the use of force. The incident occurred well away from sight and sound of the State Police cruisers, which are also equipped with mobile video cruiser cameras. All police video has been retained and is part of this investigation.
After speaking with other State Police, it was learned that the cameras falling off Troopers is a somewhat common occurrence. Other issues with the cameras have also arisen. As a result, the Department of Emergency Services and Public Protection is reviewing this incident, as well as reevaluating the entire body worn camera systems currently in use.
This incident is an ongoing investigation and as updates become available information will be disseminated accordingly.