Watson overcame a six-stroke deficit Sunday to win his third Travelers Championship title, shooting a 7-under 63 for a three-stroke victory. 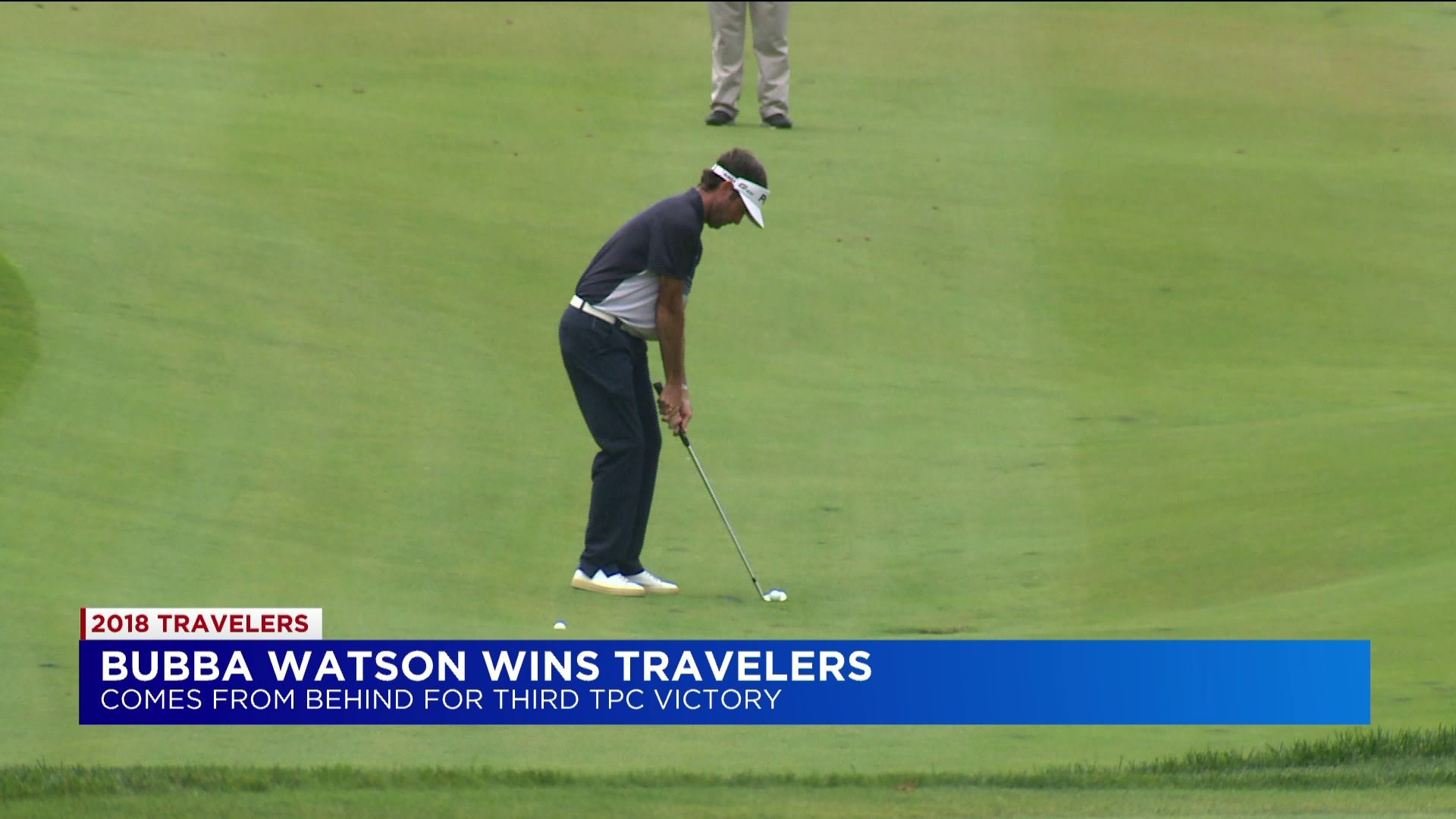 The left-hander became the first three-time winner on the PGA Tour this season and pulled within one of Billy Casper's tournament record of four victories.

Watson also came from six back to win the 2010 event for his first tour title and beat Casey in a playoff in 2015.

"I feel like this is my home course," Watson said. "As soon as they put the schedule up, I sign up for this. I want to come back here. This means so much, not only from the golf side of it, but from the family side. My dad, it was the only time he got to see me win (in 2010). He got to see me qualify for the Ryder Cup at this event. So all these things just mean so much to my family."

During the victory ceremony, Watson's adopted children — 6-year-old son Caleb and 3-year-old daughter Dakota — received small trophies of their own.
Watson shot a 33 on the front nine, but really got it going on the back, with five birdies. He tied Casey at 16-under par by getting up and down from the bunker for a birdie on the course's signature 15th hole.

Still tied on the par-4 18th, Watson hit his tee shot 366 yards, then pitched inside 3 feet, giving caddie Ted Scott a big high-five before taking the lead with the putt.

"Hitting some of those shots, especially the shot on 18, downwind, it was very difficult, but somehow pulling it off" Watson said. "And that's what we all try to do on Sundays is pull off the amazing shot."

Casey, who shot 65, 67 and 62 to lead the field by four shots coming into Sunday, birdied his opening hole. But he gave that back on the fifth and had back-to-back bogeys on 16 and 17 to end any chance he had of catching Watson.

The Englishman has finished in the top 20 in eight of his last nine tournaments. He was second here during his first visit in 2015, came in 17th a year later and had a fifth-place finish in Cromwell a year ago.

"There was a lot of fight in there," Casey said. "But, I fought my golf swing all day as you can see coming down the last couple of holes."
Watson also won at Rivera in Los Angeles in February and the World Golf Championships-Match Play in Austin, Texas, in March. He earned $1.26 million for his 12th career victory.

Cink tied the best round of the week with a 62 on Sunday. The two-time Travelers Champion came out blazing, opening with three straight birdies and putting up a 29 on the front nine. He was 7-under through 10 and acknowledged thinking about a sub-60 round after making birdie on the 15th.

"I knew that I needed three birdies to shoot 59. But quickly, I also remembered that the golf tournament was on the line and it would mean a lot more to me to win the Travelers Championship than to shoot a 59."
He bogeyed 16, but finished the round with his 10th birdie.

Defending champion Jordan Spieth, who was tied for the lead after the opening round, shot a 69 to finish at 4 under. There hasn't been a repeat champion in Cromwell since Phil Mickelson in 2001 and 2002. Spieth said he was originally planning to take time off until he defends his title at the British Open, but may re-evaluate that as he works on his game.

U.S. Open champion Brooks Koepka shot a 65 to tie for 19th at 9 under. He said his top priority right now is rest, but said that won't come until after he attends a bachelor party for his best friend next week.
"I don't feel like I need to play; I feel like my game is in a good spot," he said. "I played really well this week, just some stupid mistakes, just mental errors. That's all it was, lack of focus, low energy. To be honest with you, I'm not surprised."

Qualifier Chase Seiffert shot a 63 on Monday just to make the tournament. He shot a 64 Sunday to finish at 12 under and tie for ninth.

Seiffert's round included an eagle at the sixth hole that saw him put second shot 301 yards over the green, before holing out from 49 feet away. The 26-year-old former Florida State star also qualified last year and tied for 43rd.

"I feel like my game's good enough to be out here full-time and kind of confirms that with the way I've been playing this week and last year here as well," he said.
Jason Day holed out on 18 from 38 feet, just in front of the greenside bunker to finish at 69 and 11 under.