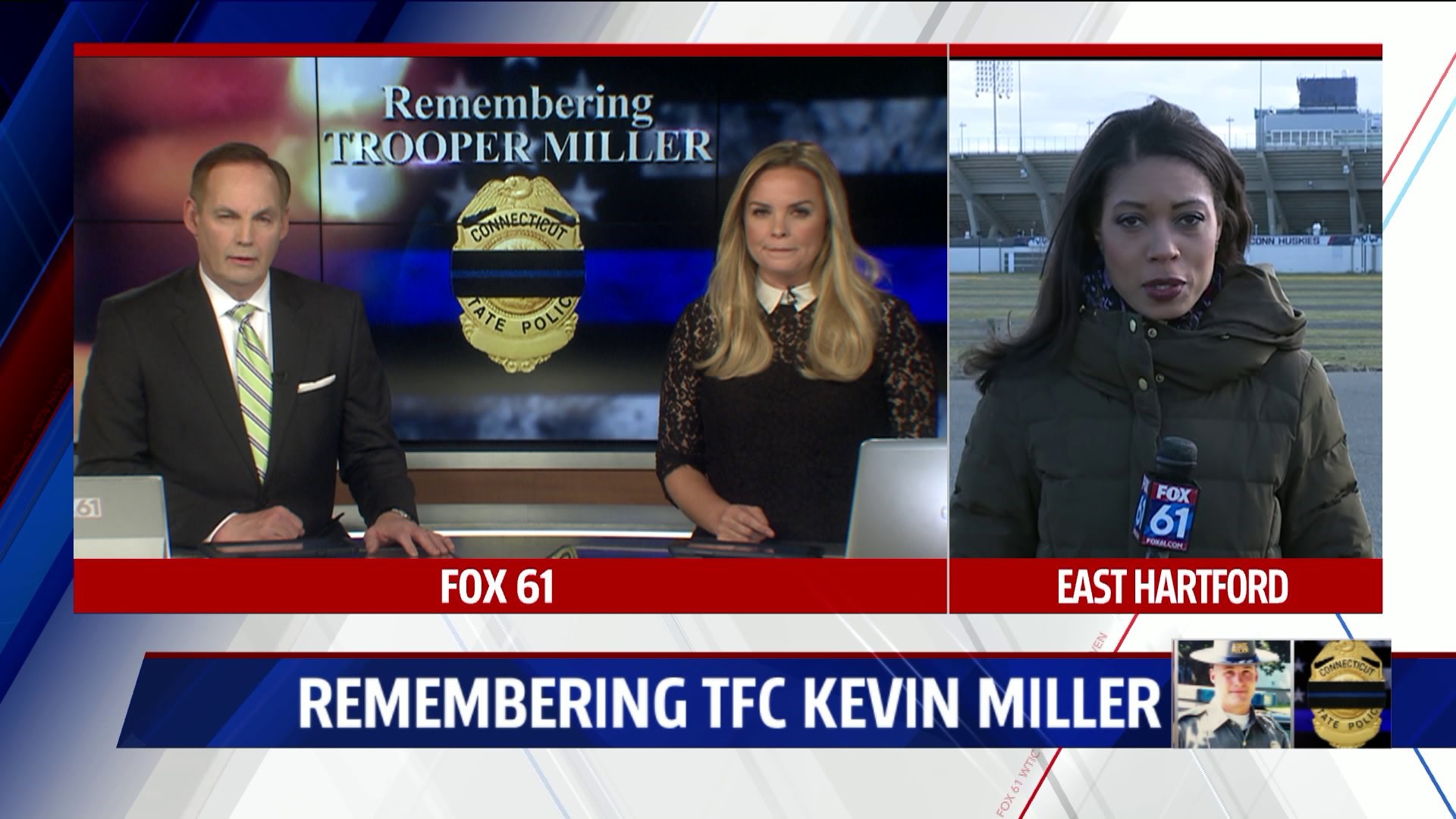 TFC Kevin Miller's body was taken from the Introvigne Funeral Home in Stafford Springs to Rentschler Field in East Hartford where his wake was held later in the afternoon.

Calling hours were held from 2pm to 4pm and 5pm to 8pm.

“Just a great all around guy, a great neighbor,” said Michah Welintukonis.

State troopers from Connecticut, New Hampshire, Vermont as well as local police and fire officials were among those who paid their respects.

Hundreds of other people from across Connecticut and beyond filled the parking lots at Rentschler Field, a testament to the impact Trooper Miller had on his community.

“He was a wonderful guy and he always had a smile on his face,” said Bob Ruey.

The turnout came as no surprise to Welintukonis, who said miller was the kind of guy you could depend on.

“My wife had to go to the hospital and I just texted Kevin and was like hey can you just take care of our dogs and he, no problem,” Welintukonis said.

“If there’s one person in the world you want to meet and have as a good friend, it would be Kevin Miller. He was such a wonderful guy.”

Ruey, who owns Bob the Barber in West Hartford would know. He was trooper Miller’s barber for more than 20 years.

Miller served the Connecticut State Police for 19 years, most recently with Troop C in Tolland and previously with Troop K in Colchester and Troop E in Montville. Miller died in an accident on I-84 last week in which his cruiser struck a tractor-trailer.

The medical examiner said the cause of death was an accident and Miller suffered from blunt impact injuries to the head, torso, and extremities with fractures and visceral injuries.

The driver of the tractor-trailer suffered no injuries, according to state police.

“It’s just so hard to comprehend, said Sue Gamache. “We ask ourselves how God can take this gentleman of two small children.”

Gamache attends First Congregational Church of Coventry, where miller and his family have been long-time members.

Even perfect strangers from near and far attended the wake including, retired Hartford Police Sergeant Tom Elwood.

“We went through a lot, what the trooper went through, and we’re just here to pay our respects to the family and the state,” Elwood said.

Trooper Miller’s family is weighing heavily on the minds of loved ones and friends.

“I’m speechless,” said Welintukonis. “I can’t even imagine what his kids are going through.”

A Mass of Christian burial funeral service will take place on Friday at 11 a.m. at Pratt and Whitney Stadium at Rentschler Field. None of the troopers assigned to Troop C are on the road Thursday, as other troopers from around the state will be covering for them.

Donations can also be made through a GoFundMe page.