FARMINGTON — Former employees of a Farmington company that abruptly shut down are filing a class action lawsuit after they showed up to work to find the d... 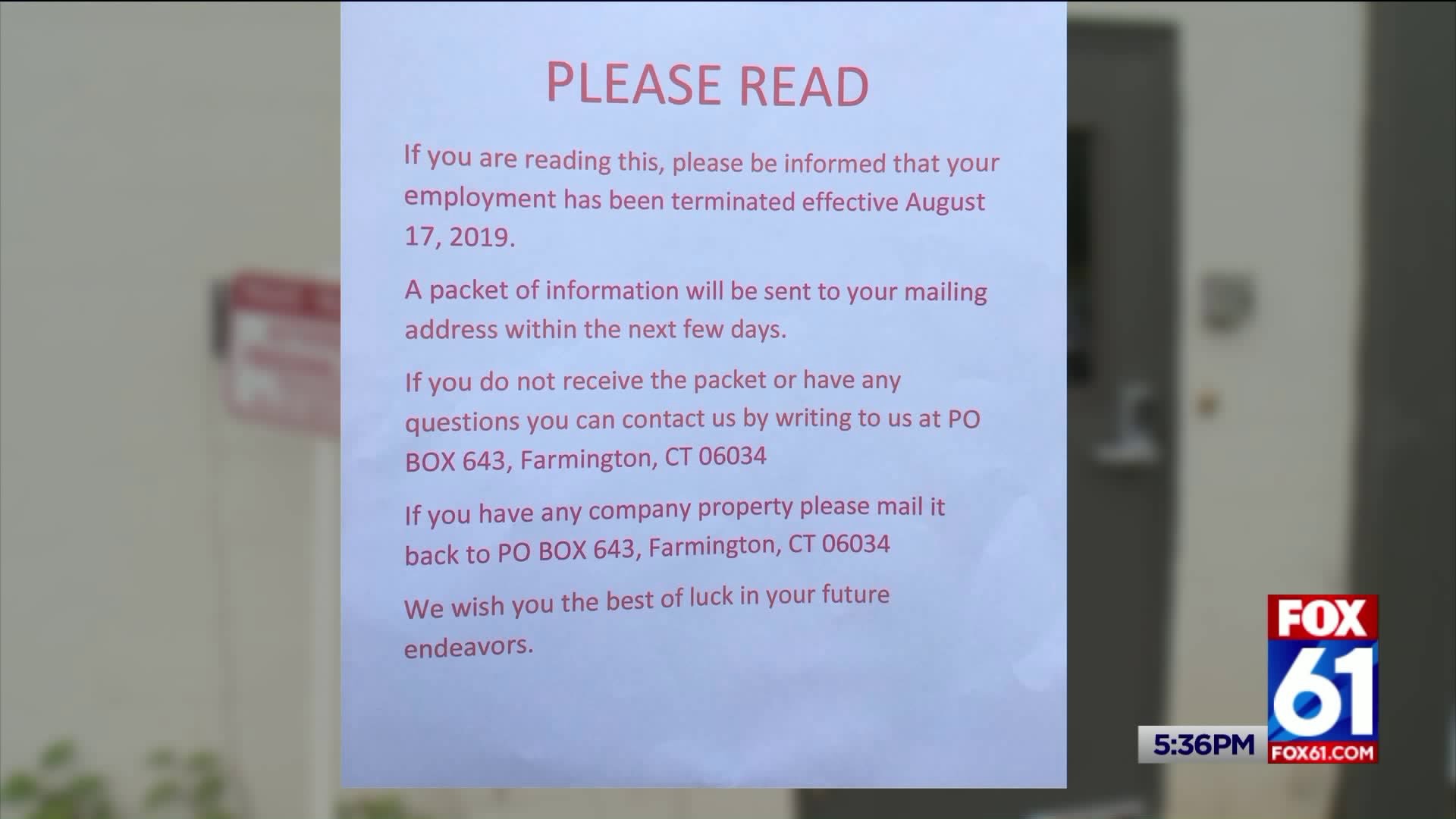 FARMINGTON -- Former employees of a Farmington company that abruptly shut down are filing a class action lawsuit after they showed up to work to find the doors locked and their jobs gone.

Chris Kingsbury filed the suit on behalf of himself and at least 100 of his former colleagues against their former employer, Ultimate Nutrition, after they abruptly shut their doors just last week.

“We all came to work at our regular times and saw the notices were actually posted on the door,” says Kingsbury. “That was our only contact to let us know that our employment had been terminated.”

If you are reading this, please be informed that your employment has been terminated effective August 17, 2019. A packet of information will be sent to your mailing address within the next few days. If you do not receive the packet or have any questions you can contact us by writing to us at PO BOX 643, Farmington, CT 06034. If you have any company property please mail it back to PO BOX 643, Farmington, CT 06034. We wish you the best of luck in your future endeavors.

Kingsbury says he hasn’t received any information in the mail since the sign was posted August 17th.

“No one can take a hit like that,” he says. “No one is prepared like that to lose their job. Ideally you get some kind of notice, even if it's just a few days or a few weeks.”

Kingsbury met with the company’s then-President, Carl Hauptman, shortly after. Hauptman was on vacation at the time and told Kingsbury he didn’t even know that he was losing his job.

“It was a shock to all of us who had no clue. They had just brought on some new executives, they had promoted mid-level managers to higher-level managers. Folks that left good careers to come work here within just a few weeks previously.”

“Mr. Rubino, there's plenty of ways you could have done this to still be thought of favorably,” says Kingsbury. “It's unfortunate that you took this one path that really made such a detrimental impact to all of the people who were professional and were dedicated and it's really unfortunate.”

The lawsuit claims that Ultimate Nutrition and its affiliate company, Prostar, Inc. violated the WARN act by not giving at least 60 days advance written notice of termination to employees. Those employees are now looking for 60 days worth of unpaid wages, pension and 401(k) contributions, and other benefits.

An attorney for Ultimate Nutrition told me that they aren't filing for bankruptcy, but that he has no further comment on this case. They haven't yet filed an answer to in response to the complaint.