STORRS — A conservative commentator has been arrested at the University of Connecticut after a fight broke out during his speech titled “It’s OK To ... 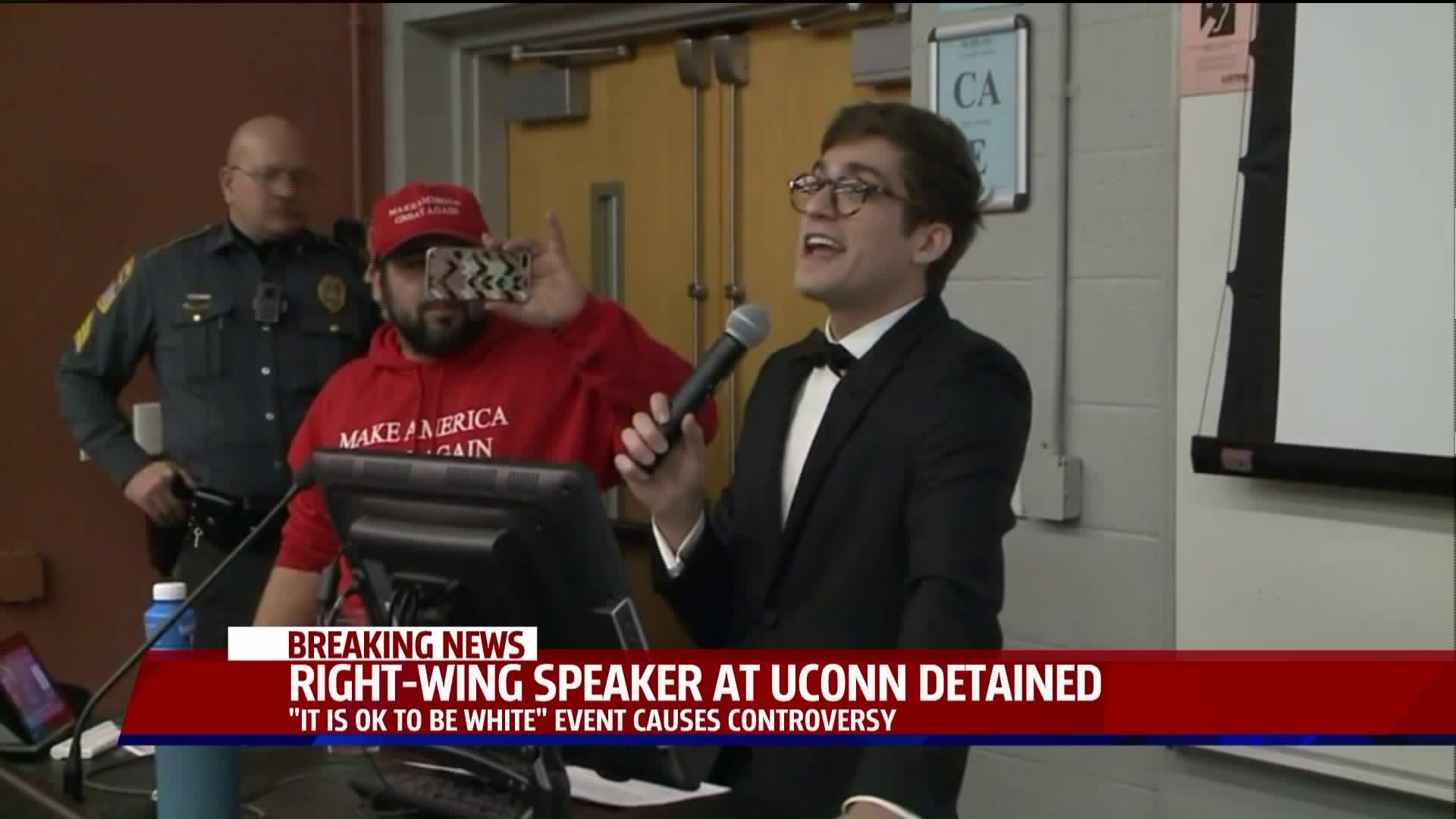 STORRS — A conservative commentator has been arrested at the University of Connecticut after a fight broke out during his speech titled "It's OK To Be White."

Lucian Wintrich is the White House correspondent for the right-wing blog Gateway Pundit.

Wintrich's speech Tuesday night was cut short when a girl in the audience appeared to take something off the podium he was using, according to Stephanie Reitz, UConn spokesperson.

Wintrich followed the girl and the two got into an altercation, she said.

Wintrich says on his twitter Wednesday that he will pursue legal action against UConn.

Update: I will peruse legal justice against the woman who stole my property and the University that failed to secure my freedom of speech and safety.

Both, Wintrich and Miller were released on a $1,000 bond.

Lucian Wintrich took to Twitter early Wednesday morning after he was released from police custody.

IM FREE & regained my Twitter. I will be posting the FULL speech tomorrow via The Gateway Pundit. pic.twitter.com/wwBXWF51tv

It's really unfortunate that some of the kids at @UConn felt the need to be violent and disruptive during a speech that focused on how the leftist media is turning Americans against each other. Tonight proved my point.

Adding irony to the entire ordeal, I was arrested for "Second Degree Breach of Peace." Apparently, "Peace" is anything far left students don't agree with. SAD! Plenty of great young conservatives in the audience - disappointed that the left wouldn't let this happen as planned.

Hey Ben - just curious if you think that if someone steals property you don't have the right to retrieve your belongings. Asking for a friend. https://t.co/3iyHQZTx1X

Reitz added, "UConn Police also are investigating an incident in which someone broke a window in the lecture hall as the crowd was leaving and threw a smoke bomb inside. This led to speculation as to whether police had discharged tear gas, but that was not accurate - no tear gas was used or needed."

Reitz said no injuries were reported and no additional arrests have been made at this time.

“This was a very disappointing evening. Thoughtful, civil discourse should be a hallmark of democratic societies and American universities, and this evening fell well short of that.

We live in a tense and angry time of deep political division. Our hope as educators is that creative leadership and intellectual energy can be an antidote to that sickness, especially on university campuses. Between the offensive remarks by the speaker who also appeared to aggressively grab an audience member and the reckless vandalism that followed, that was certainly not the case on our campus tonight. We are better than this.

“Something similar will arise here again at some point in the near future. We will need to learn from this experience and rise to that occasion.

“I want to thank the UConn public safety personnel and other UConn staff who were present tonight who handled a difficult situation with characteristic poise and professionalism as they reacted quickly to a highly charged and very challenging situation.”

On Wednesday, Gov. Malloy said, "I think that it is important that we have an exchange of ideas even those ideas that we don’t like on college campuses. We should not be providing stages for people to be racists, advocate violence."

Malloy added, "So I think there are lines but those lines can be easily respected. When something like that gets out of hand we shouldn’t be surprised based on the tenor of the discussion being had but we can also be disappointed, that it also gets out of hand that way. I think the President’s address to that issue, that is the President of the University was appropriate today."

Students rally outside of Schenker Hall as police and Lucian Wintrich are inside with the doors locked. pic.twitter.com/mtggpA4Yhr

Wow. As everyone leaves, Lucian Wintrich is grabbed by a crowd of students. Police immediately step up to break up the fight. pic.twitter.com/FOvW7UiNdg

As Lucian Wintrich walks in, you can hear the crowd booing pic.twitter.com/lIfnAKwpF4

Huge turnout at Lucian Wintrich’s talk called “It is okay to be white.” Lots of police on standby. pic.twitter.com/oQX4Jedfqf

According to school officials, "The group is a student organization. UConn and the Undergraduate Student Government (USG) are not sponsors or organizers, and the event does not involve tuition or public money."

Wintrich has been on a speaking tour of college campuses. His talk at UMass Boston was rescheduled to February according to the website Gateway Pundit due to safety concerns.

Reitz said in a statement,

UConn does not bar speakers on the basis of content. Free speech, like academic freedom, is one of the university’s bedrock principles.

That being said, a particular speaker’s or group’s presence on campus doesn’t indicate UConn’s endorsement of the presenter or their message. Any student group is free to reserve on-campus space for a speaker or other program as long as the event adheres to UConn’s guidelines, which apply to all student groups and on-campus programming.

Posts on social media indicate that posters for the event were being torn down or modified.

The UConn College Republicans posted on Facebook in response.