HARTFORD – The Chief Operating Officer for Hartford Public Schools was fired in April after an internal investigation found “completely unacceptable” and “inapp... 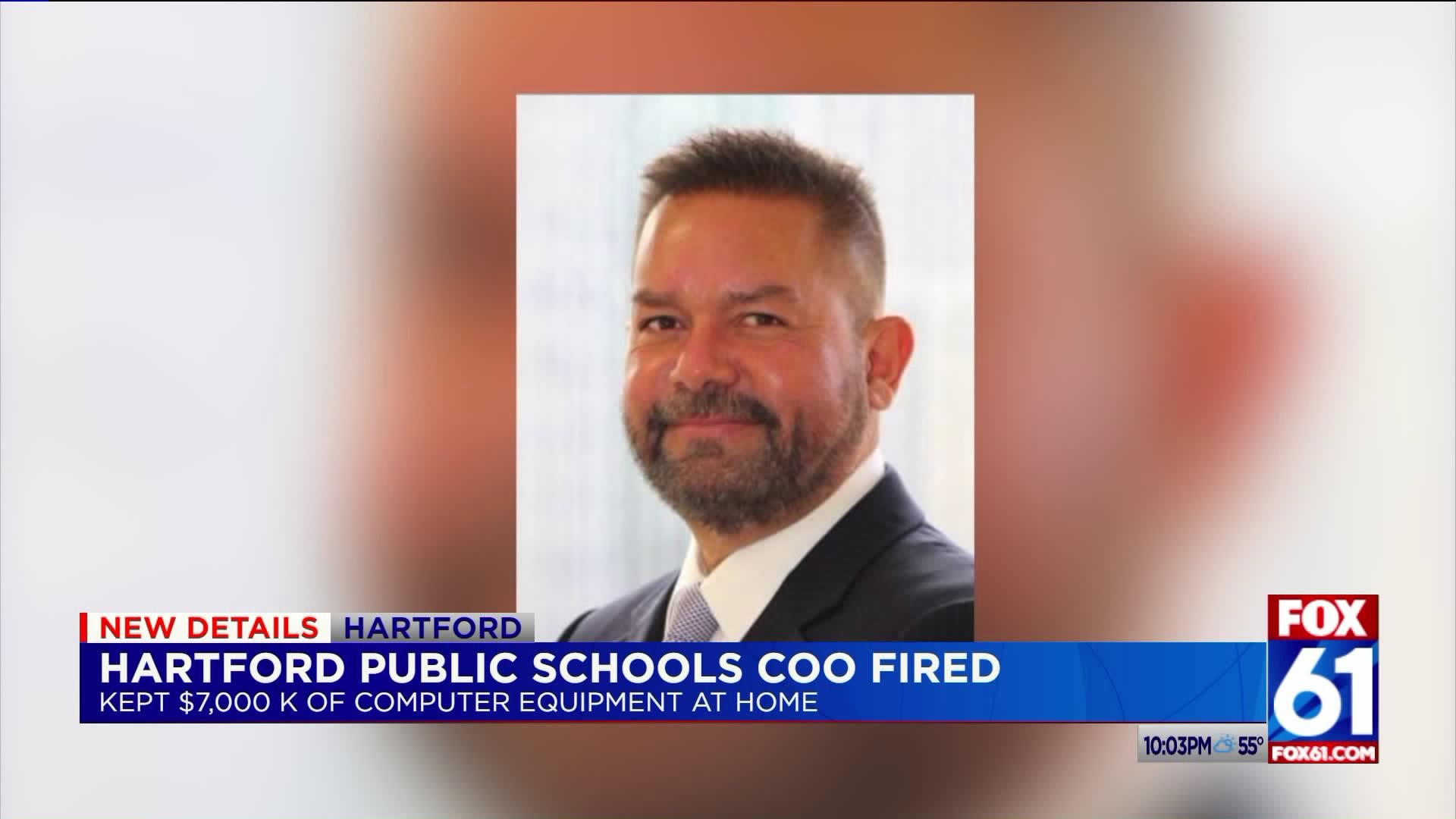 HARTFORD – The Chief Operating Officer for Hartford Public Schools was fired in April after an internal investigation found “completely unacceptable” and “inappropriate conduct.”

As FOX61 was first to report, Dr. Jose Colon-Rivas was placed on leave, effective February 20, pending the outcome of an administrative investigation. A termination letter, signed by Superintendent Dr. Leslie Torres-Rodriguez and obtained through a freedom of information act request, outlines five allegations to which Colon-Rivas admitted.

Most notably, the termination letter alleges that in May 2018 Colon-Rivas “directed that certain technology and equipment be purchased from Apple totaling $7,578.” According to the letter, Colon-Rivas admitted the equipment was not delivered the departments for which they were intended “for many months.”

“You also admitted that you had maintained many pieces of equipment/technology at your home, in your car, and had given one item to a third-party,” Dr. Torres-Rodriguez said in the letter.

The items mentioned were:

During a fact-finding meeting with Colon-Rivas, he said he “had no ‘malintent’”and characterized his own conduct as “pretty negligent,” according to the termination letter.

In addition to the misappropriation of computer equipment, Colon-Rivas was also accused of requesting reimbursement for $30.17 worth of Dunkin Donuts in 2018. Colon-Rivas received cash for the reimbursement according to the Superintendent’s letter.

Dr. Torres Rodriguez also wrote that in October 2018 and January 2019, Colon-Rivas directed an employee to enter his time off, which was approved as vacation time, as sick time. The letter accused Colon-Rivas of engaging “in conduct meant to intimidate” the unnamed employee, by telling them that Dr. Torres Rodriguez and another administrator were angry with the employee.

"I conclude that you failed to provide an adequate or plausible explanation for your conduct," Dr. Torres-Rodriguez wrote.

In February, FOX 61 requested information about how computers are tracked within the Hartford School District. An inventory audit on technology in Hartford Public Schools was performed three times in six years, according to a spokesman for HPS. The district’s finance department has an asset inventory which logs assets with a value equal to or greater than $500.

A third-party contractor, Duff & Phelps, performed an inventory audit in 2013, 2015 and most recently this year. The latest inventory audit started February 11 and was completed by the 19th.

Typically a school, department, or office looking to purchase computer equipment needs to go through a seven-step approval process. The process includes approval from a department head, accounting department and HPS head of finance.

“As this is a personnel matter, Hartford Public Schools will not comment further,” a spokesperson for HPS said.

According to his biography, which was still on the Hartford Public Schools website Wednesday night (a week after his firing) and removed by Thursday, Dr. Colon-Rivas was “responsible for supporting the advancement of the district’s strategic direction, overseeing the day-to-day operations of Hartford Public Schools and ensuring the highest level of resource accountability.” The HPS website said the COO oversees facilities, food and nutrition, transportation, school choice, and athletics.