NORWALK — As Connecticut faces the prospect of a $5 billion budget deficit over the next two years, Florida’s Governor is seizing what he sees as an... 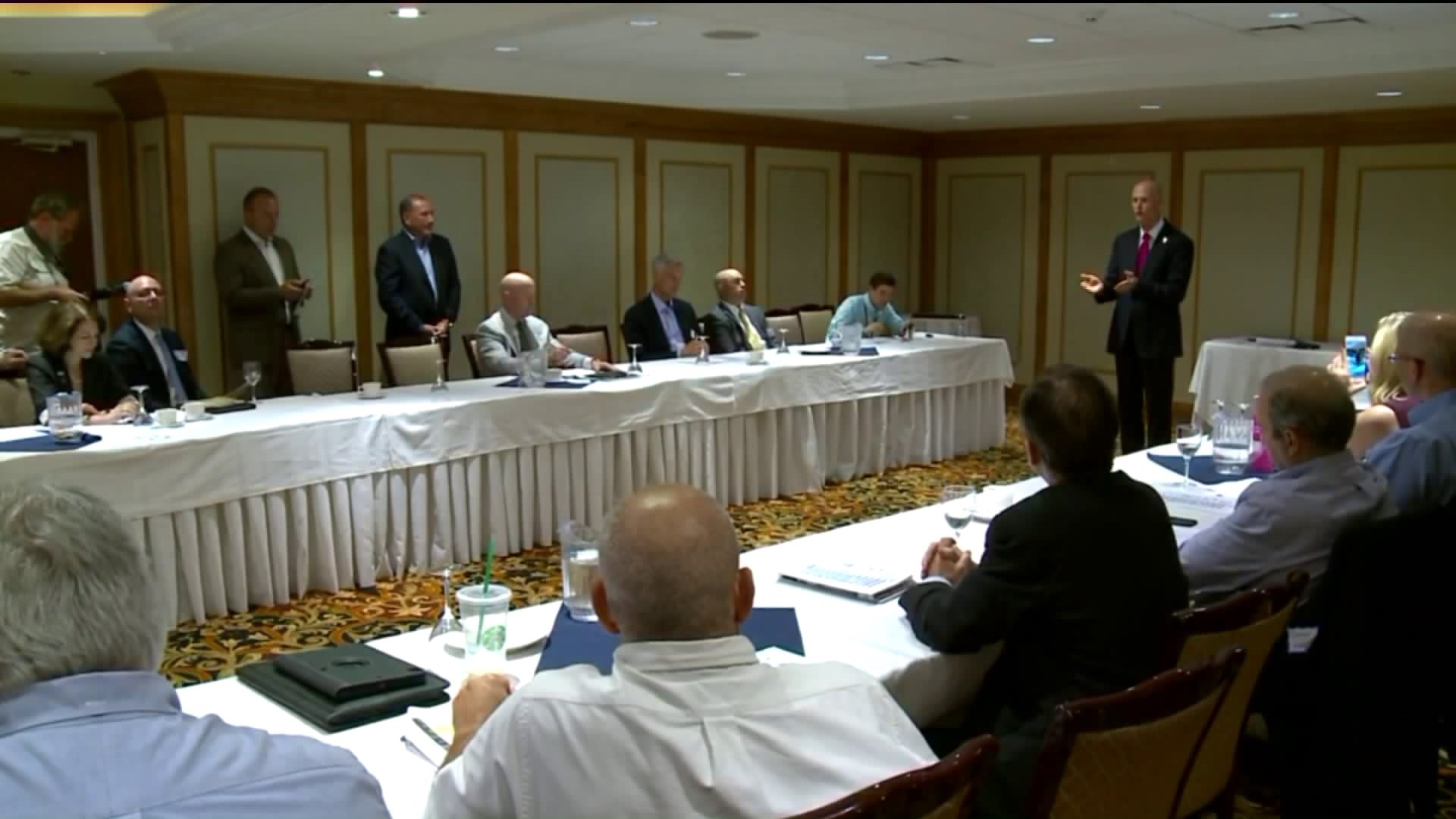 NORWALK -- As Connecticut faces the prospect of a $5 billion budget deficit over the next two years, Florida's Governor is seizing what he sees as another opportunity to engage disenchanted businesses.

Governors Rick Scott (R-Florida) and Dannel P. Malloy (D-Connecticut) were both elected on the same day in 2010. But, very little has been the same since.

"We've got the second lowest taxes, per capita, in the country," Scott told a Norwalk business gathering Monday morning. "Your taxes are more than double per person as Florida."

"Our state income tax receipts dropped by $200 million from 2016 to 2017 after two massive state income tax increases," said Bart Shuldman, the CEO of Hamden based TransAct Technologies, which employs over 140 people.

He says falling revenues that combined with sharply increased costs "has the makings of a real financial death spiral in Connecticut."

But, Malloy says Florida is not all it's cracked up to be.

"They don't have our high schools. They're not the best readers in the country."

But, Scott, who was back in Norwalk for the second time since 2015, told the business owners, "We're generally in the top 10. Generally around six as far is the best K-12 education system in the country, because we are focused on results."

And Scott says he has produced results. While Connecticut faces a $5 billion dollar deficit over the next two years, Florida's surplus will be $6 billion over the same time, he says.

Scott says he has been successful in maintaining and growing business in Florida is that he is in constant contact with the business community asking "what can I do to help you? Is there a tax that's that's unfair to you? Is there a regulation that doesn't work?"

Among the dozen or so business owners attending the session, at the Norwalk Inn & Conference Center, was a financial adviser, formerly of Fairfield, who moved his family of four to Naples, FL 10 months ago.

"I mean, think about it. Connecticut has a progressive state income tax," said Bill Shoaf. "And, if you take a look at the numbers that you are no longer paying, that adds up rather quickly."

And, he is spreading the word rapidly.

"I'm actually working with someone right now who has just over 150 employees looking to relocate to Florida," he said.

But, Malloy's points out numerous high profile businesses will maintain their headquarters in Connecticut, despite overtures from numerous states, including Florida. Those companies include:

Malloy says Connecticut poaches businesses from Florida "all the time."

"The first prototypes were all manufactured in Florida, but, now, as it actually goes into manufacturing, it will be done in Connecticut," noted Malloy

"Absolutely not," insisted state senator Toni Boucher (R-Wilton). "We are looking to see what our competition is doing. We want to fight back. We want to take those ideas, bring them to Connecticut."

With the new $85 million Florida Job Growth Grant Fund in tow, Scott had other meetings scheduled with Fairfield County business leaders throughout the day.

Shuldman said Connecticut's budget problems will not end with the expected two-year $5 billion budget deficit over the next two years.

"The teachers pension costs will rise to over $6 billion," he said. "The Governor forces a third of the pension costs down to the towns and cities. That's $400 million today."

Ultimately, he says, that will hurt the town's property taxes and housing prices. That's just as a result of the teachers pensions. State employees pension obligations, he says, will grow to over $2.6 billion in the next seven to eight years.

Florida has term limits for their Governor, so Scott, who once moved his hospital related to business from Greenwich to Florida in 2001, has a year and a half to complete his job, with an eye on another, running for United States Senator.