HADDAM — Haddam Selectwoman Melissa Schlag, who has caught major flak for taking a knee during the Pledge of Allegiance at board meetings, is making headl... 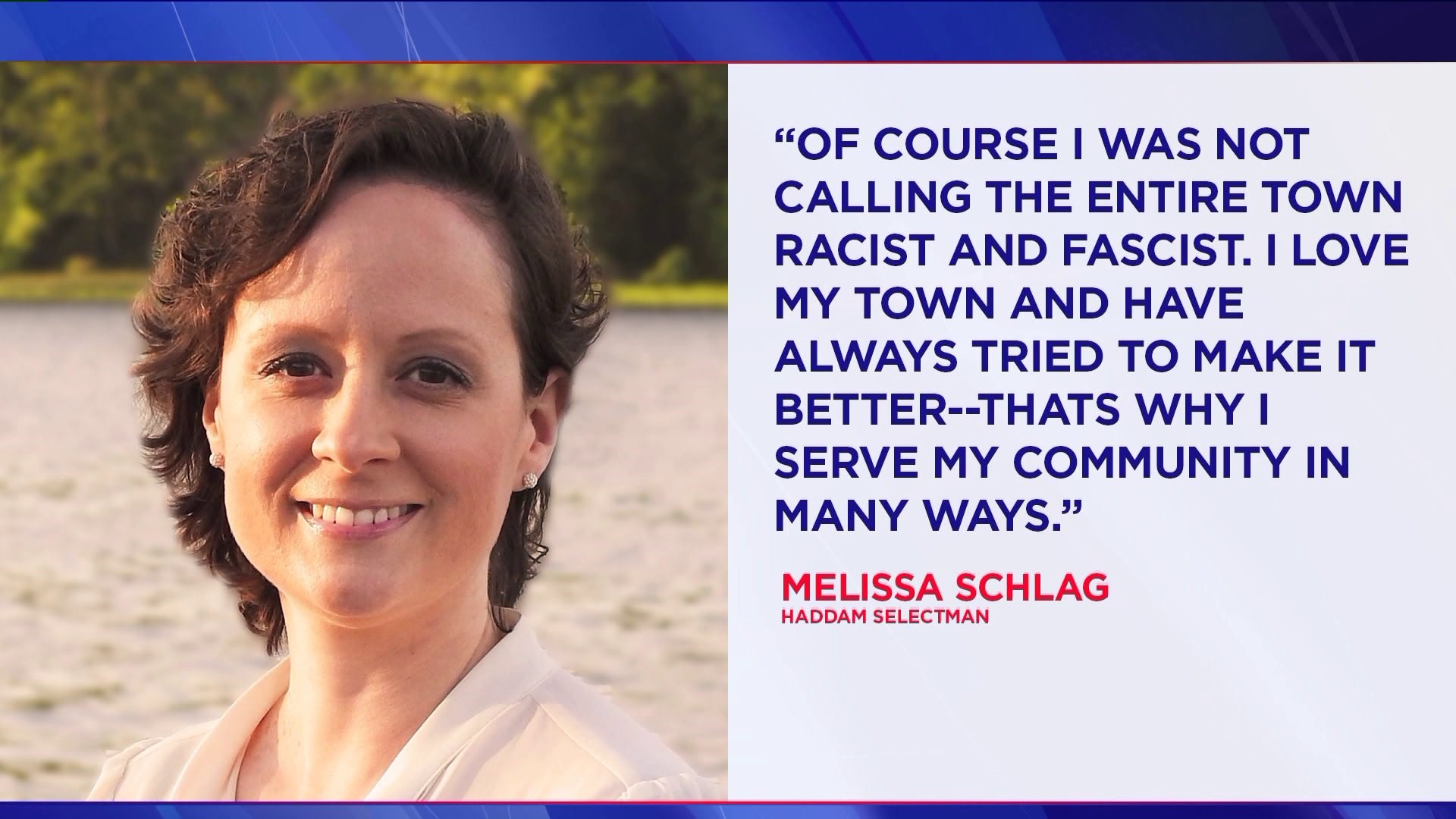 HADDAM -- Haddam Selectwoman Melissa Schlag, who has caught major flak for taking a knee during the Pledge of Allegiance at board meetings, is making headlines again.

And it was a short statement that is garnering plenty of response in that Connecticut River community.

What Schlag said was captured on a cell phone. The video was sent to FOX61 by an anonymous viewer.

On Monday night, while speaking to a friend, at the Board of Selectmen meeting, Schlag, was recorded saying "This town's fascist and racist."

That statement, she says, is a result of the nasty comments she's received in person and on social media since deciding to kneel during the Pledge of Allegiance at Board of Selectmen meetings, in protest of President Trump.

"It’s OK for first amendment right for her to be able to say what she needs to say but the opposing people, who opposed her, for what she’s done, but now all of a sudden we're labeled as fascist racist," said Lizz Milardo, Haddam First Selectman.

Some residents agree with Schlag's comments, though.

"In my experience of being here over 45 years, I have seen instances of racism here and there are people that surprise me that say racist things," said Alan Stokke of Haddam.

Another man, who has lived in town for nearly a decade, says he's been a victim of racism in Haddam.

Some are insulted by Schlag's fascist/racist label, which she says was not intended for the entire town.

"That’s not who we are in this town," said Chip Frey, a 14 year resident of Haddam. "I haven’t witnessed any of it. I am very saddened by it. It’s a great town."

In a prepared statement issued to FOX61, Schlag pointed at politicians saying, “What Art Linares (State Senator) and Tim Herbst (gubernatorial candidate) are doing by demanding I resign and that citizens should say the pledge or face consequences is forced patriotism which is the beginning of fascism."

"If she won’t give us her resignation, if she won't step down, we will make sure that we solve this problem at the ballot box," said Linares, who represents the 33rd district, which includes Haddam.

Frey, a member of the Haddam's Planning and Zoning Commission, fears for potential business development and home sales in Haddam if the focus remains on Schlag.

"I am saddened by the fact that I think with her as a representative, it’s not gonna help."

"Enough is enough," Milardo said. "Now, Haddam is labeled with something else."

Schlag repeated what she has said numerous times: she will not resign. She will be up for re-election, along with the rest of the Board of Selectmen, in 2019.