HOUSTON – The National Hurricane Center says Hurricane Harvey has strengthened to a Category 4 storm. The center warns that conditions are deteriorating a...

The center warns that conditions are deteriorating as Hurricane Harvey slowly moves toward the Texas coast. Forecasters say effects from Harvey could be felt as far east as the Alabama coast and the western Florida Panhandle.

National Hurricane Center spokesman and meteorologist Dennis Feltgen says, “The tropical storm force winds have already commenced on the Gulf Coast. You’ve essentially run out of time for outdoors preparations. You need to find a safe place and you need to stay there.”

The center says Harvey has maximum wind speeds of 120 mph (193.11 kph) as the powerful storm churns off the Texas coast.

The storm quickly grew Thursday from a tropical depression into a Category 1 hurricane, and then developed into a Category 2 storm early Friday. By Friday afternoon, it had become a Category 3 storm. It’s forecast to make landfall in Texas late Friday or early Saturday.

NEW: #Harvey continues to intensify and is now a category 4 #hurricane with maximum sustained winds of 130 mph. https://t.co/tW4KeGdBFb pic.twitter.com/7CkJkuafTb

The slow-moving storm is fueled by warm Gulf of Mexico waters. Forecasters are labeling it a “life-threatening storm” with landfall predicted late Friday or early Saturday between Port O’Connor and Matagorda Bay, a 30-mile (48-kilometer) stretch of coastline about 70 miles (110 kilometers) northeast of Corpus Christi.

Millions of people are bracing for a prolonged battering that could swamp dozens of counties more than 100 miles (161 kilometers) inland.

Brock Long is the director of the Federal Emergency Management Agency. He tells “Good Morning America” that Harvey is a “very serious” threat and that the window for evacuating is quickly closing.

Long says he expects extensive damage from significant rain over the next three days.

An emergency management official on the Texas coast says a primary concern as Harvey approaches is heavy rain that could leave many towns isolated for days as they’re turned into “essentially islands.” 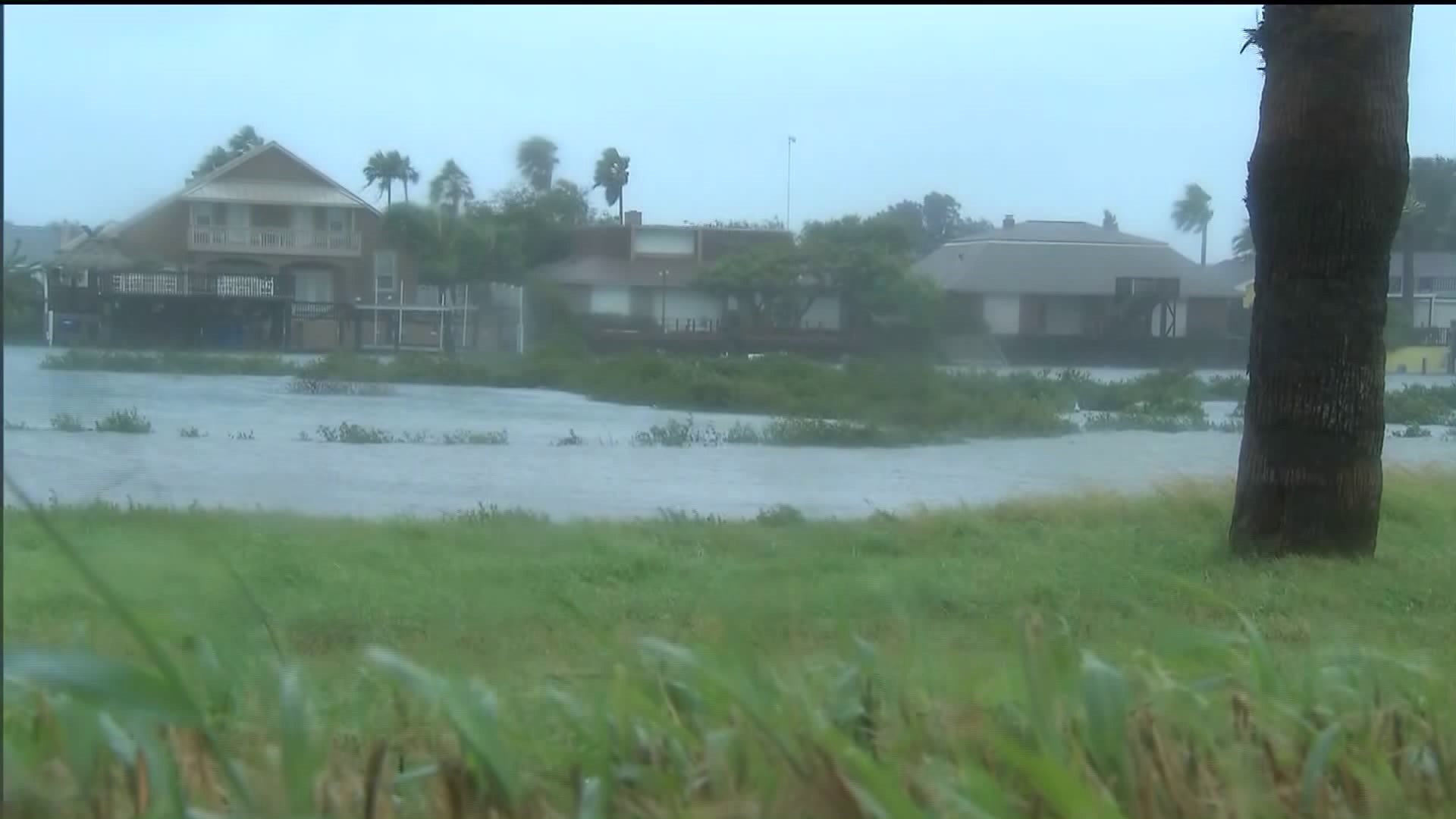 Melissa Munguia is deputy emergency management coordinator for Nueces (nyoo-AY'-sis) County. She says there are vast flatlands just inland from the central Texas coast that are prone to flooding.

Munguia says that traffic backups were being seen Friday on heavily traveled roads such as Interstate 37 as people move inland to San Antonio and other locations.

The National Hurricane Center's official five-day forecast Friday has Harvey slamming the central Texas coast, stalling and letting loose with lots of rain. Then forecasters project the weakened but still tropical storm is likely to go back into the Gulf of Mexico, gain some strength and hit Houston next week.

Jeff Masters, Weather Underground's meteorology director, said this could cause a collision of high water with nowhere to go. Harvey is projected to drop up to 3 feet (0.91 meter) of rain in some places over the next several days.

But a second landfall near Houston means more storm surge coming from the Gulf. Storm surge is an abnormal rise of water above the normal tide, generated by a storm.

Connecticut is lending a helping hand in preparation for Harvey.

Berlin PD announced that Officer Dave Cruickshank has been deployed to Texas with a National Disaster Medical Team from Connecticut. Officer Cruickshank will be in charge of field hospital security for the federal government and is heading to Dallas, Texas.

The American Red Cross also said they were preparing for a large response effort as Harvey bears down on Texas and Louisiana. They are urging everyone in its path to get ready now. The storm is expected to make landfall along the Gulf Coast Friday night, which would make it the first hurricane to hit Texas in almost 9 years.

The Red Cross in Connecticut and Rhode Island has already deployed five responders in advance and anticipates even more deployments as Harvey gets worse. The Red Cross workers that were deployed were Stefanie Arcangelo of Cheshire, Neil Brockway of Hartford, Donna Hathaway of Uncasville, David Kemp of Vernon, and Warren Saloman of North Haven.

American Red Cross say they already have 17 shelters ready to open and support thousands of people if needed. Trailers full of shelter and relief supplies have been pre-positioned including cots, blankets, comfort, and cleaning supplies. They said that more than 30 Red Cross emergency response vehicles are activated with about 20 more on alert.

Just arrived at Camp David, where I am monitoring the path and doings of Hurricane Harvey (as it strengthens to a Class 3). 125 MPH winds!

Just arrived at Camp David where I am closely watching the path and doings of Hurricane Harvey, as it strengthens to a Category 3. BE SAFE!

I have spoken w/ @GovAbbott of Texas and @LouisianaGov Edwards. Closely monitoring #HurricaneHarvey developments & here to assist as needed.

On Twitter Friday, Trump said he "Received a #HurricaneHarvey briefing this morning" from top federal officials.

In another statement on Twitter, Trump said he had spoken with Texas Gov. Greg Abbott and Louisiana Gov. John Bel Edwards. He added: "Closely monitoring #HurricaneHarvey developments & here to assist as needed."

The Associated Press and CNN contributed to this story.