NORTH CAROLINA — Forecasters say Florence is now a tropical storm but will continue to threaten North and South Carolina with powerful winds and catastrop... 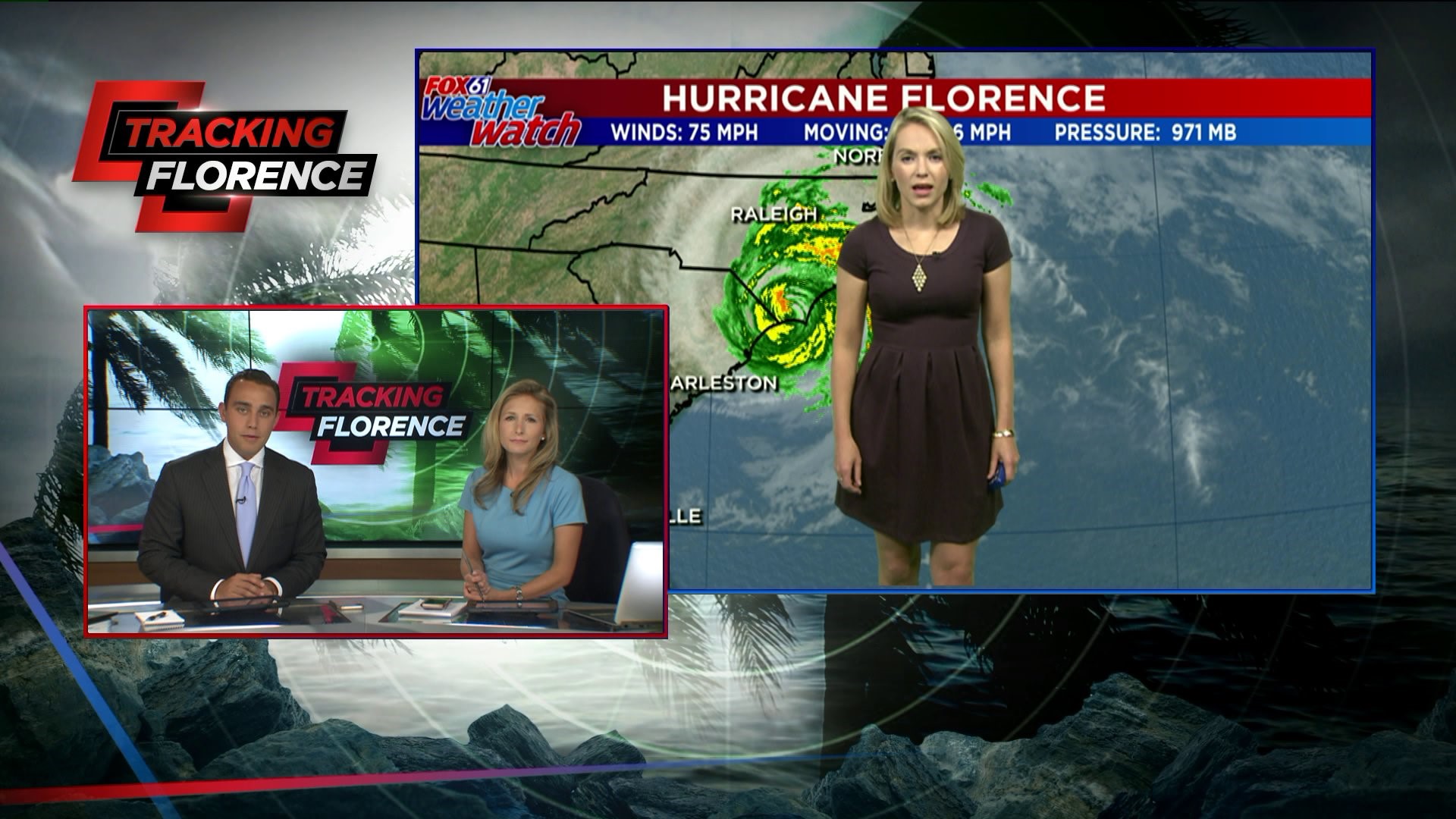 NORTH CAROLINA -- Forecasters say Florence is now a tropical storm but will continue to threaten North and South Carolina with powerful winds and catastrophic freshwater flooding.

At 5 p.m., Florence was centered about 50 miles (75 kilometers) west-southwest of Wilmington, North Carolina, and about 25 miles (45 kilometers) northeast of Myrtle Beach, South Carolina.

Officials have confirmed four deaths in North Carolina as a result of Hurricane Florence.

Blowing ashore with howling 90 mph winds, Hurricane Florence splintered buildings, trapped hundreds of people and swamped entire communities along the Carolina coast Friday in what could be just the opening act in a watery, two-part, slow-motion disaster. At least four people were killed.

Forecasters warned that drenching rains of anywhere from 1 to 3½ feet as the storm crawls westward across North and South Carolina could trigger epic flooding well inland over the next few days.

As 400-mile-wide Florence pounded away at the coast with torrential downpours and surging seas, rescue crews used boats to reach scores of people besieged by rising waters along a river. More than 60 others had to be rescued as a cinderblock motel collapsed.

Florence flattened trees, crumbled roads and knocked out power to three-quarters of a million homes and businesses, and the assault wasn't anywhere close to being over.

The hurricane was "wreaking havoc" and could wipe out entire communities as it makes its "violent grind across our state for days," the governor said. He said parts of North Carolina had seen storm surges — the bulge of seawater pushed ashore by the hurricane — as high as 10 feet.

A mother and baby were killed when a tree fell on a house, according to a tweet from Wilmington police. Also, one person was killed while plugging in a generator, and a man was knocked to the ground while outside and died, authorities said.

Shaken after seeing waves crashing in the Neuse River just outside his house in the town of New Bern, hurricane veteran Tom Ballance wished he had evacuated.

"I feel like the dumbest human being who ever walked the face of the earth," said Ballance, owner of a seafood restaurant that was flooded.

Florence made landfall as a Category 1 hurricane at 7:15 a.m. at Wrightsville Beach, a few miles east of Wilmington and not far from the South Carolina line, coming ashore along a mostly boarded-up, emptied-out stretch of coastline.

By early afternoon, its winds had weakened to 75 mph, just barely a hurricane and well below the storm's terrifying Category 4 peak of 140 mph earlier in the week. But Florence's forward movement had slowed to a crawl, and it piled on the rain in a siege that could go on all weekend long.

The town of Oriental, North Carolina, had gotten more than 18 inches of rain just a few hours into the deluge, while Surf City had 14 inches and it was still coming down.

For people living inland in the Carolinas, the moment of maximum peril from flash flooding could arrive days later, because it takes time for rainwater to drain into rivers and for those streams to crest.

Preparing for the worst, about 9,700 National Guard troops and civilians were deployed with high-water vehicles, helicopters and boats that could be used to pluck people from the floodwaters.

Authorities warned, too, of the threat of mudslides and the risk of an environmental disaster from floodwaters washing over industrial waste sites and hog farms.

Florence was seen as a major test for the Federal Emergency Management Agency, which was heavily criticized as slow and unprepared last year for Hurricane Maria in Puerto Rico, where the death toll was put at nearly 3,000.

The National Hurricane Center said Florence will eventually break up over the southern Appalachians and make a right hook to the northeast, its rainy remnants moving into the mid-Atlantic states and New England by the middle of next week.

Meteorologist Ryan Maue of weathermodels.com said Florence could dump a staggering 18 trillion gallons of rain over a week on North Carolina, South Carolinas, Virginia, Georgia, Tennessee, Kentucky and Maryland. That's enough to fill the Chesapeake Bay or cover the entire state of Texas with nearly 4 inches (10 centimeters) of water, he calculated.

North Carolina alone is forecast to get 9.6 trillion gallons, enough to cover the Tar Heel state to a depth of about 10 inches (25 centimeters).

On Friday, coastal streets in the Carolinas flowed with frothy ocean water, and pieces of torn-apart buildings flew through the air. The few cars out on a main street in Wilmington had to swerve to avoid fallen trees, metal debris and power lines. Traffic lights out of order because of power failures swayed in the gusty wind. Roof shingles were peeled off a hotel.

The Wilmington airport had a wind gust clocked at 105 mph (169 kph), the highest since Hurricane Helene in 1958. Airlines canceled more than 2,400 flights through Sunday.

In Jacksonville, North Carolina, next to Camp Lejeune, firefighters and police fought wind and rain as they went door-to-door to pull people out of the Triangle Motor Inn after the structure began to crumble and the roof started to collapse.

In New Bern, population 29,000, flooding on the Neuse River trapped about 200 people.

Boat teams rescued residents Sadie Marie Holt, 67, who first tried to row out of her neighborhood during Florence's assault.

"The wind was so hard, the waters were so hard, that trying to get out we got thrown into trailers. We got thrown into mailboxes, houses, trees," said Holt, who had stayed at home because of a doctor's appointment that was later canceled. She retreated and was eventually rescued by a boat crew.

Ashley Warren and boyfriend Chris Smith did manage to paddle away from their home in a boat with their two dogs, and the experience left her shaken.

"Honestly, I grew up in Wilmington. I love hurricanes. But this one has been an experience for me. We might leave," she said.