Hurricane Florence has made landfall in North Carolina, but its crawling pace and overwhelming storm surges are setting up hours and hours of destruction and hu... 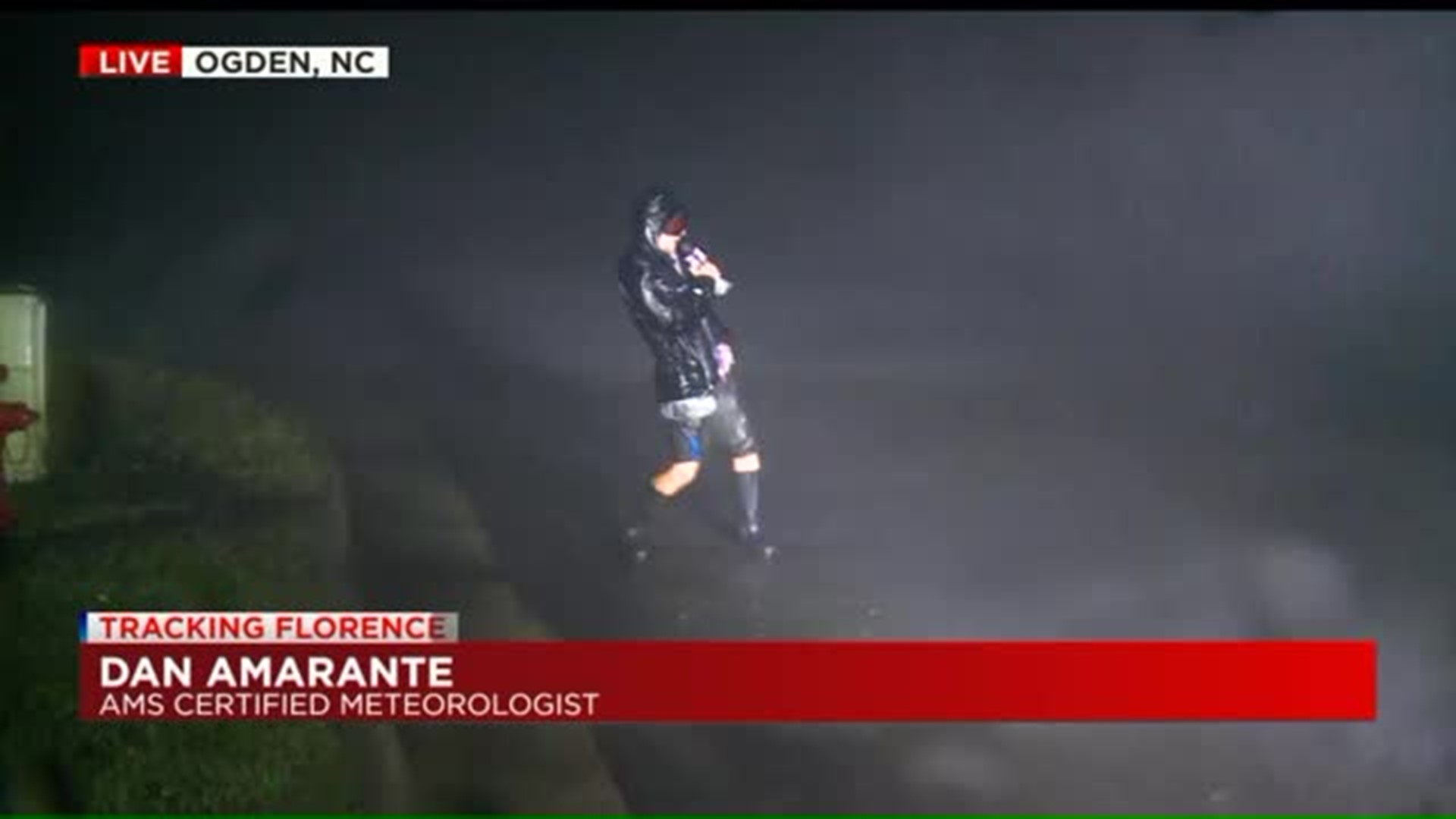 Hurricane Florence has made landfall in North Carolina, but its crawling pace and overwhelming storm surges are setting up hours and hours of destruction and human suffering -- with dozens desperately awaiting rescue in one flooded town alone.

The Category 1 hurricane, with wind of more than 90 mph and dumping 3 inches of rain an hour, made landfall at 7:15 a.m. ET near Wrightsville Beach, just east of Wilmington.

Florence's center may linger for another whole day along coastal North and South Carolina -- punishing homes with crushing winds and floods and endangering those who've stayed behind.

In the besieged North Carolina town of New Bern, rescuers plucked more than 100 people from rising waters, but about 150 more had to wait when conditions worsened and a storm surge reached 10 feet.

"In a matter of seconds, my house was flooded up to the waist, and now it is to the chest," said Peggy Perry, who along with three relatives, was trapped early Friday in her New Bern home. "We are stuck in the attic."

Officials urged residents there to take shelter at the highest points of their homes, including rooftops.

Florence's rain will reach 40 inches in some parts of the Carolina coasts, and gusty winds will send the ocean and rivers spilling into neighborhoods, forecasters said.

By Friday morning, Florence already had:

• Pushed in a storm surge of 10 feet above normal levels in Morehead City, North Carolina, the National Weather Service said.

• Forced more than 60 people to evacuate a hotel in Jacksonville, North Carolina, after part of the roof collapsed, city officials said.

• Canceled more than 1,300 flights along the East Coast through Friday.

Hours earlier, streets along the coast had been transformed into raging streams, and massive waves surged along the Outer Banks.

• It's closing in: The eyewall is onshore in North Carolina, the National Hurricane Center said.

• Downgraded but dangerous: Though now a Category 1 storm, hurricane-force winds extend 80 miles from Florence's center, and it will linger for days, with prolonged winds and rain making it more dangerous.

• Ominous warning: "Don't focus on the category of the storm. Hurricane Florence will slow down as it approaches the coast and moves inland. This will cause extremely dangerous flooding," the Federal Emergency Management Agency warned.

More than 1 million people had been ordered to evacuate before the streets became inundated.

Morehead City resident Rebecca Marson decided not to evacuate because her surgeon husband wanted to remain behind with other first responders. They're riding out the storm at their home with four children -- ages 11 to 17 -- Marson's friend, four dogs, two chinchillas, a cat and a lizard.

Marson said they'd lost power and the winds were howling outside, but they had enough food and water to last them for days.

New Bern's WCTI television employees fled their studio Thursday night due to rising flood waters. Footage posted on social media showed a meteorologist saying on air that they had to evacuate. He then leaves the studio and leaves a radar of Florence's rain bands playing on a loop.

Officials in several states have declared states of emergency, including in the Carolinas, Georgia, Virginia and Maryland, where coastal areas are still recovering from summer storms.

Florence is one of four named storms in the Atlantic.