HARTFORD – More than 100 days without a state budget and education leaders have had enough. The Connecticut Education Association is taking the state to court. ... 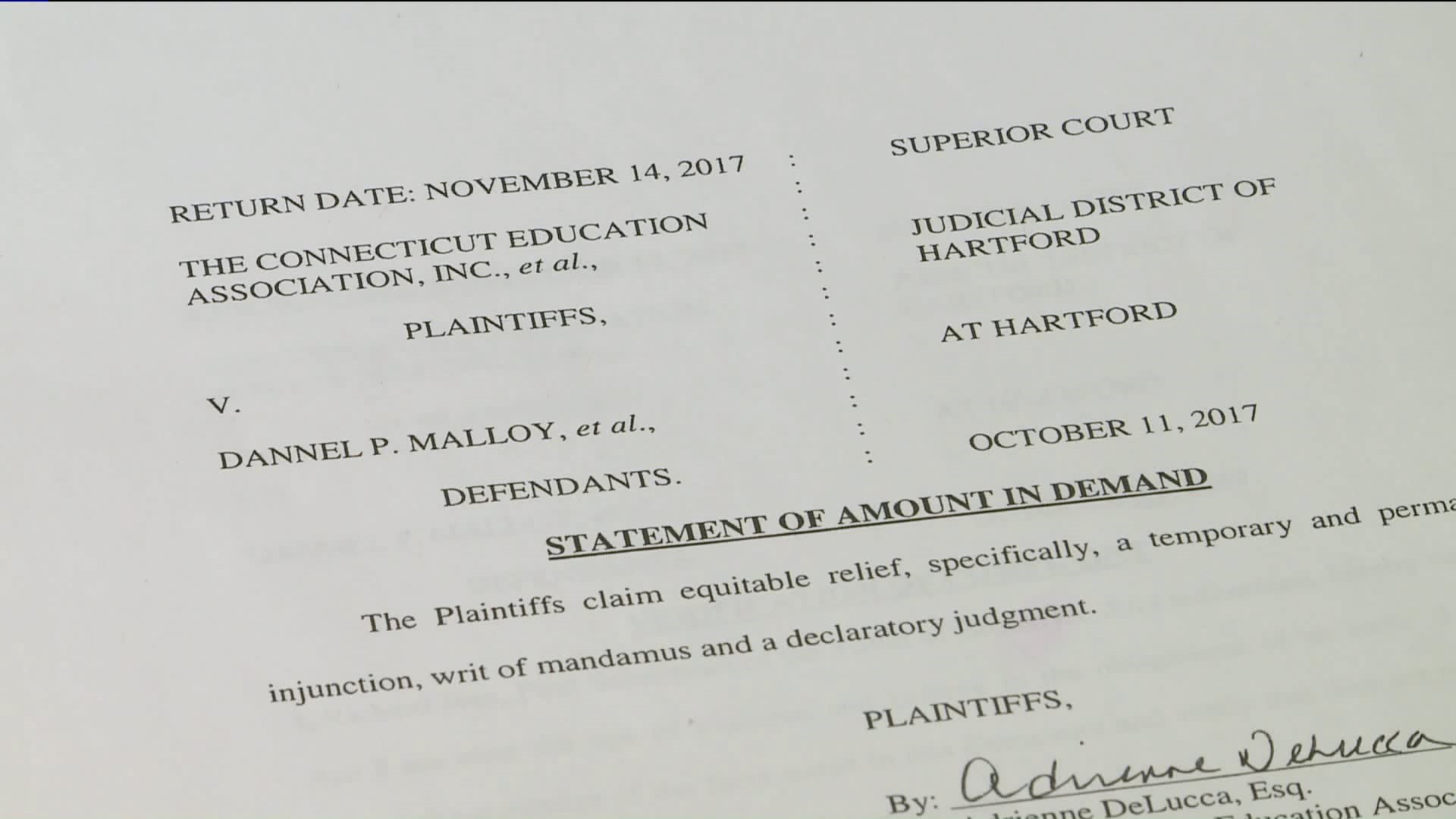 HARTFORD – More than 100 days without a state budget and education leaders have had enough.

The Connecticut Education Association is taking the state to court.

The CEA, the state’s largest teachers union, filed a lawsuit Wednesday in Hartford Superior Court, along with the city of Torrington, the towns of Brooklyn and Plainfield, as well as teachers, a parent and her children.

The group is seeking an injunction against Governor Malloy’s executive order that cuts more than $557 million in education funding from the majority of school districts.

“These are not Democratic issues, these are not Republican issues. These are education issues,” Cohen said. “Every single resident in our great state should be outraged by what our elected leaders are trying to do to our children, to our schools, to our teachers, and our communities.”

The state is currently being run under executive order because it does not have a new budget and hasn’t had one since July 1. The lawsuit argues that in the absence of a state budget, Governor Malloy does not have the authority to cut education funding.

The lawsuit points out that according to state law, without a budget, the previous fiscal year grant amounts must be paid to the towns.

“We have a strong legal case to block these cuts,” CEA Executive Director Donald Williams said. “First, students in Connecticut have a right to a free adequate public education under the state's constitution.”

Gov. Dannel P. Malloy called the lawsuit premature, saying that “under normal circumstances” the state isn’t scheduled to award the grants until the end of October. State lawmakers are still hoping to reach a bipartisan two-year budget agreement before then.

Malloy says the Connecticut Education Association “would be hard-pressed” to say they have standing to seek a court injunction “any time before the check would otherwise go out.”

“The checks are already going out,” Williams said. “Brooklyn, Plainfield and Torrington have already received their payments and they’ve already been cut severely.”

Plaintiff municipalities got their first checks from the state, on October 2, according to the lawsuit. The payments included about 25 percent of the total grant set forth in Governor Malloy’s Revised Resource Allocation Plan. Torrington’s check came about  -million dollars short of the first installment from the 2017 fiscal year amount.

“Some towns may be forced to go back to half day kindergarten, cut support services for students who don’t get qualified for special education, class sizes may swell, paraprofessionals and teaching specialists who help ensure that students don’t fall through the cracks will be eliminated, Chairman of the Connecticut Association of School Administrators Tony Ditrio said. “Foreign language and other important programs will probably be cut.”

Lawmakers have been hopeful that a bipartisan deal may be reached soon, but it remains uncertain when or if a vote might take place. Malloy said he plans to soon release a revised version of his own budget "as a basis for further discussions."

***Associated Press contributed to this story***