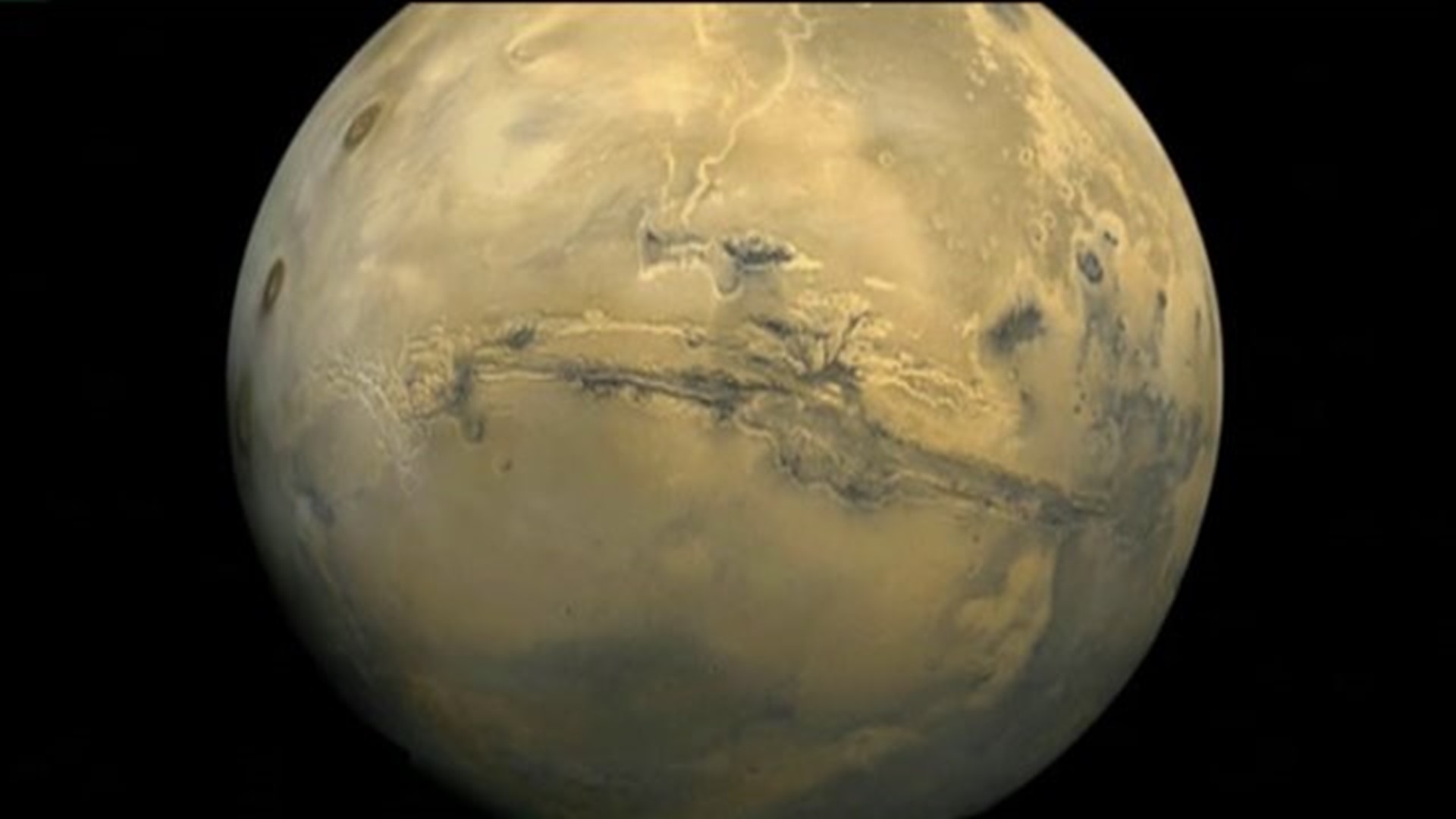 CAPE CANAVERAL, Fla. -- Potentially life-giving water still flows across the ancient surface of Mars from time to time, NASA scientists said Monday in revealing a potential breakthrough in both the search for life beyond Earth and human hopes to one day travel there.

While the discovery doesn't by itself offer evidence of life on Mars, either past or present, it does boost hopes that the harsh landscape still offers some refuge for microbes to cling to existence.

"The existence of liquid water, even if it is super salty briny water, gives the possibility that if there's life on Mars, that we have a way to describe how it might survive," said John Grunsfeld, associate administrator for the Science Mission Directorate at NASA.

NASA researchers using an imager aboard the Mars Reconnaissance Orbiter confirmed the watery flows by looking at light waves returned from seasonal dark streaks on the surface, long suspected to be associated with liquid water.

The investigation showed the streaks absorb light at specific wavelengths associated with chemicals known to pull water from the Martian atmosphere in a process known as deliquescence, said Georgia Tech doctoral student Lujendra Ojha, who first discovered the streaks while still an undergraduate student at the University of Arizona in 2011.

The chemicals allow the water to remain liquid at lower temperatures but also help keep it from boiling off in the thin atmosphere of Mars, the researchers said.

It remains unclear where the water comes from. Theories include deliquescence, melting subsurface ice or even a liquid-water aquifer that feeds the process. Discovering what precisely is causing the phenomenon is a mystery for the next round of investigations, said Michael Meyer, lead scientist for NASA's Mars Exploration Program.

The researchers' findings are in a new paper being presented this week at the European Planetary Science Congress in France.

This is not the first discovery of water on Mars.

Researchers have known for many years that Mars has water frozen at its poles, in its thin atmosphere, and, most recently, in tiny puddles that appear to form at night on the surface.

Nor is it the first potential clue that Mars could have once -- or may still -- host life. The Mars Curiosity rover, for instance, has detected methane on the surface of Mars, as well as other chemical signatures suggesting the possibility of past or present life.

It remains to be seen whether the new discovery improves the odds of life on Mars, but researcher Mary Beth Wilhelm said the results suggest "more habitable conditions on the near surface of Mars than previously thought."

How habitable, she said, depends on how salty and how cold the conditions are.

But Alfred McEwen, who heads up NASA's HiRISE high-resolution camera aboard the Mars orbiter, said he's fairly confident life will one day be found on Mars.

"It's very likely, I think, that there's life somewhere in the crust of Mars, microbes," he said.

Jim Green, director of planetary science at NASA, said the discovery announced Monday puts NASA in a perfect position to look for that life.

"We haven't been able to answer the question, 'Does life exist beyond Earth?' " Green said. "But following the water is a critical element of that. We now have, I think, a great opportunity to be in the right locations on Mars to thoroughly investigate that."