HAMDEN — Police identify three suspects involved in a police chase that ended in a crash at the entrance to Home Depot, across from Benham St in Hamden Th... 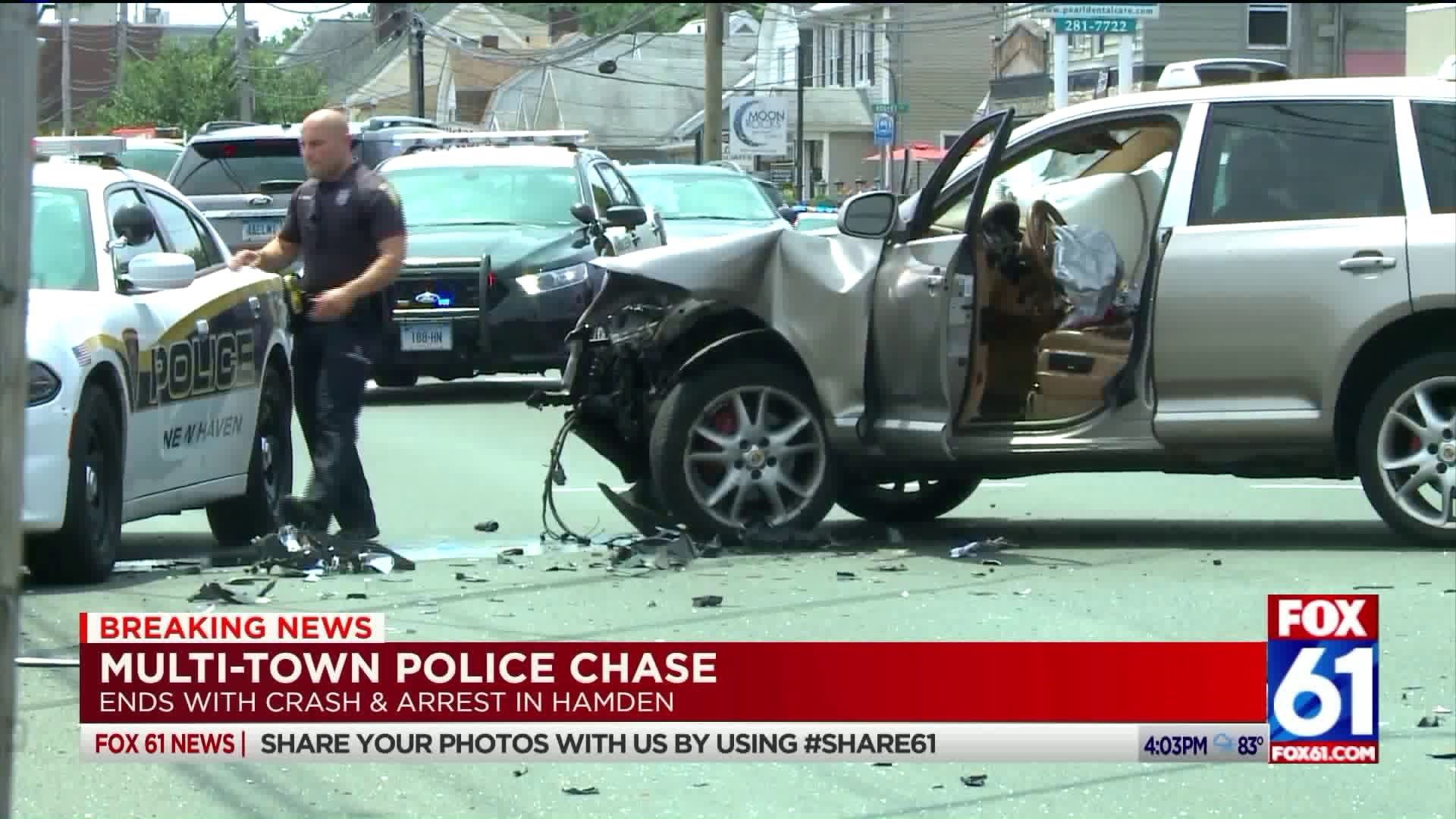 HAMDEN -- Police identify three suspects involved in a police chase that ended in a crash at the entrance to Home Depot, across from Benham St in Hamden Thursday.

New Haven investigators are working to determine if today’s events started with a custody hearing and subsequent dispute at the Superior Court for Juvenile Matters, on Whalley Avenue, where shots were fired at approximately 10:45 a.m.

Then, at approximately 12:15 p.m,. New Haven Police responded to a report of gunfire at a residence on Catherine Way near Brookside Ave. The person responsible for the gunfire fled in a motor vehicle.

With a description of the wanted car called into police, New Haven Intel located the maroon Honda Accord near Dixwell Ave. and Munson St. in New Haven, where the suspect vehicle engaged police in a pursuit into Hamden.

It ended when the Honda Accord they were pursuing rammed a Porsche SUV that was turning into the Home Depot parking lot.

Across the street from the scene, at the Acropolis Diner, people were stunned by what they saw.

"All of a sudden, we looked out the window and we saw police were everywhere," said Miguel Davila, of New Haven. "We saw the Honda. It was on the curbside."

There was plenty more for the window watchers.

"We saw somebody I guess came out of the SUV and police got them because he was running I guess from the red Honda, but they (police) realized he had nothing to do with it so they let them go," said Davila.

And investigators didn’t have to go far to bring the three occupants of the Honda into custody.

While police were searching through the Honda, Fox 61 photographer John Roll captured them recovering a shotgun from the trunk.

Investigators do not believe the Catherine Way gunfire is related to the gunfire incident near the Juvenile Court. In the earlier incident, at 10:45 a.m., New Haven Police responded to a ShotSpotter activation for gunfire at the intersection of Whalley Avenue and Sherman Avenue.

Arriving officers were told a car’s occupant had fired a gunshot at another occupied car and inadvertently struck a passing commercial truck.

Police say Cloud was driving the car and is being charged with criminal possession of a firearm, weapon in a motor vehicle, conspiracy/criminal attempt to commit first degree assault, engaging in pursuit and reckless driving.

Gee is charged with criminal possession of a firearm, weapon in a motor vehicle and conspiracy/criminal attempt to commit first degree assault.

Brown is charged with criminal possession of a firearm, weapon in a motor vehicle, conspiracy/criminal attempt to commit first degree assault and tow counts of risk of injury to a minor.

The investigations are ongoing. Anyone with information is asked to call the New Haven Detective Bureau at 203-946-6304.