President Barack Obama praises our past, discusses the future in State of the Union

WASHINGTON —His message was strong: we’ve done good, but we need to keep doing more. President Barack Obama opened his State of the Union address with a f... 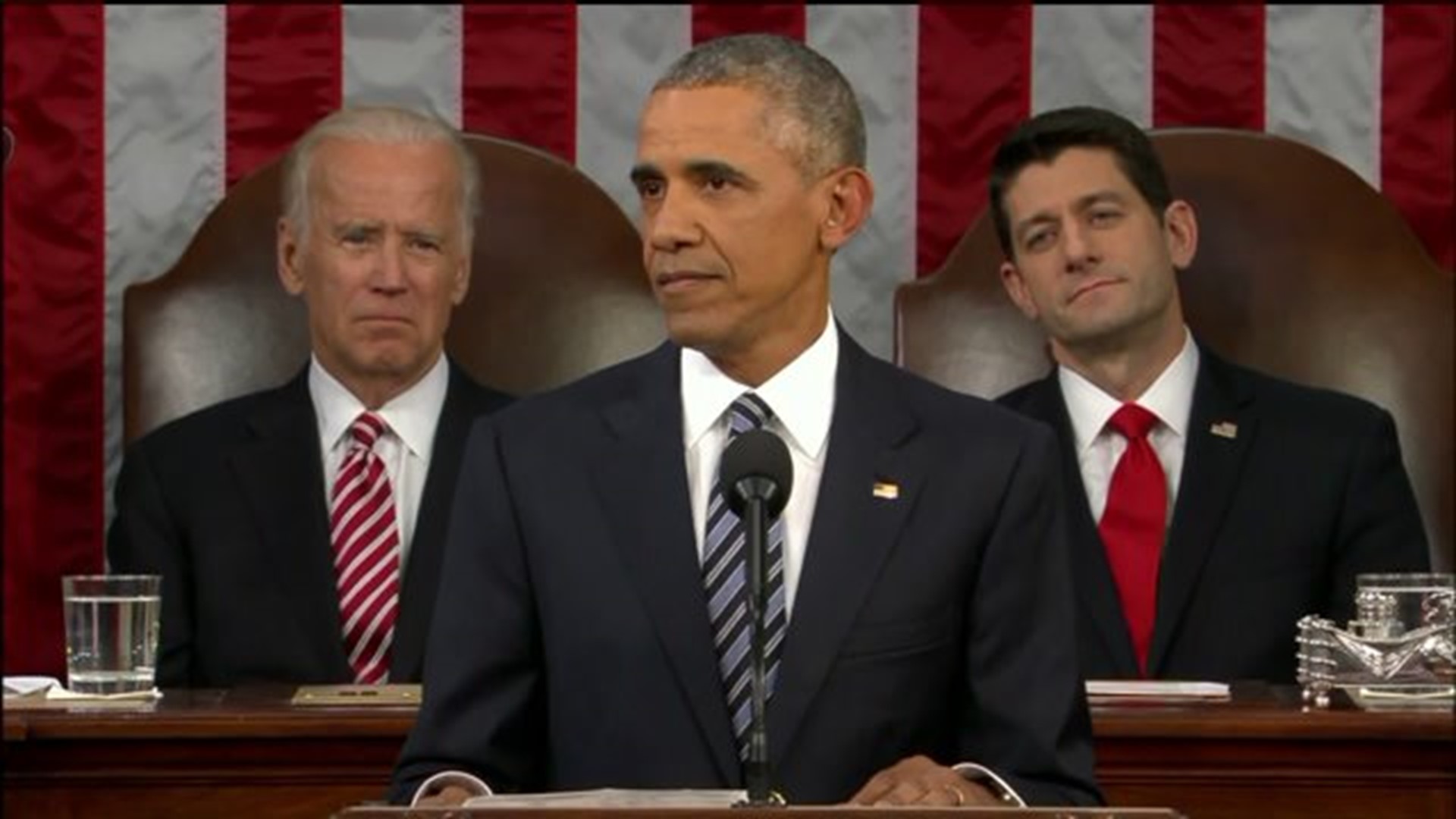 WASHINGTON —His message was strong: we've done good, but we need to keep doing more.

President Barack Obama opened his State of the Union address with a few jokes about the race to pick his successor.

Obama got cheers when he promised to keep his address short — because some of the legislators are antsy to get back to Iowa, where the first caucuses of the presidential campaign take place in just a few weeks.

Obama ad-libbed that he's been to Iowa, and he's happy to share some advice. Obama told the legislators, "I'll be shaking hands afterward if you want some tips."

Right off the bat, the president announced his primary goals for the end of his presidency: "Protecting our kids from gun violence. Equal pay for equal work. Paid leave. Raising the minimum wage."

However, Obama stuck to his promise to make a "nontraditional" speech that would offer a broad, long-term view of the nation instead of the traditional list of ambitious plans for the coming year and calls for new legislation. White House officials said before his speech he was avoiding specific calls for legislation because they would likely hit a dead end in Congress as his presidency begins to wind down.

However, one the one specific new measure he did announce was a new measure to fight cancer, and he's putting Vice President Joe Biden at the helm.

Last year, Vice President Biden said that with a new moonshot, America can cure cancer. Last month, he worked with this Congress to give scientists at the National Institutes of Health the strongest resources they’ve had in over a decade.

Tonight, I’m announcing a new national effort to get it done. And because he’s gone to the mat for all of us, on so many issues over the past forty years, I’m putting Joe in charge of Mission Control. For the loved ones we’ve all lost, for the family we can still save, let’s make America the country that cures cancer once and for all.

Early in his speech the president listed four big questions that our country has to answer to move to our future:

He also made some bold statements about the economy, and the progress we've made.

He said that right now, our country "has the strongest, most stable economy in the world."

Since he took office, the country has seen 14.1 million new private-sector jobs over 70 months, the longest streak in U.S. history, he said. Also, the unemployment rate has been cut in half and our deficit has been reduced by nearly 3/4.

He also called out those who are making the most money, who are behind the record corporate profits seen in the past few years, and how they are impacting the average middle class family.

"Food Stamp recipients didn’t cause the financial crisis; recklessness on Wall Street did.Immigrants aren’t the reason wages haven’t gone up enough; those decisions are made in the boardrooms that too often put quarterly earnings over long-term returns."

The president then spoke about education, and how the high school graduation rate in America is 82 percent, up from 75 percent when his presidency began. He also talked about the importance of college affordability, and the strides that his office has made on reducing student debt.

One achievement the president touted was the expansion of legal same-sex marriage to all 50 states.

"Such progress is not inevitable. It’s the result of choices we make, together. And we face such choices right now."

Meanwhile, after weeks of intense campaigning, Obama didn't make gun control a centerpiece of his speech. However, he did make a bold statement on the topic by leaving a seat open in the first lady's guest box in a stark reminder of silenced victims of gun violence.

He also called out those who don't believe in climate change, or who still deny it.

"Look, if anybody still wants to dispute the science around climate change, have at it," he said. "You’ll be pretty lonely, because you’ll be debating our military, most of America’s business leaders, the majority of the American people, almost the entire scientific community, and 200 nations around the world who agree it’s a problem and intend to solve it.

One line that got a lot of laughs was an honest self-reflection on healthcare: "I'm guessing we won’t agree on health care anytime soon."

He did tout his success with the Affordable Care Act, mentioning that nearly 18 million additional Americans now have health care compared to six years ago, but he said that we need to do more to ensure the future health of social security and medicare.

The president then pivoted to a topic on the entire world's minds: terrorism and ISIS.

He said that while we need to fight ISIS on a more united front--"Priority number one is protecting the American people and going after terrorist networks."--we are unequivocally the strongest nation on earth and can defend ourselves.

I told you earlier all the talk of America’s economic decline is political hot air. Well, so is all the rhetoric you hear about our enemies getting stronger and America getting weaker. The United States of America is the most powerful nation on Earth. Period. It’s not even close. We spend more on our military than the next eight nations combined. Our troops are the finest fighting force in the history of the world. No nation dares to attack us or our allies because they know that’s the path to ruin. Surveys show our standing around the world is higher than when I was elected to this office, and when it comes to every important international issue, people of the world do not look to Beijing or Moscow to lead — they call us.

And he didn't just call it "hot air" to say that we're being weakened while our enemy is strengthened. He went a step further to take on the people who say that. "But as we focus on destroying ISIL, over-the-top claims that this is World War III just play into their hands," he said.

He also brought up what many say was one of the highlights of his presidency.

He ended his speech on a hopeful note, but also a pleading one, saying he needs help to achieve a better future.

"What I’m asking for is hard," he said. "It’s easier to be cynical; to accept that change isn’t possible, and politics is hopeless, and to believe that our voices and actions don’t matter. But if we give up now, then we forsake a better future."

He called for unity, saying that whatever ones political convictions, everyone needs to be a part of our future. Everyone needs to get out and vote, to speak up about what is important to him or her, and to stand up for others.

Here was his final message:

That’s the America I know. That’s the country we love. Clear-eyed. Big-hearted. Optimistic that unarmed truth and unconditional love will have the final word. That’s what makes me so hopeful about our future. Because of you. I believe in you. That’s why I stand here confident that the State of our Union is strong.

You can read the full text of the speech here.

It was feared earlier in the day that his speech would be overshadowed by Iran's capture of 10 U.S. sailors aboard two Navy ships, a topic he steered clear of.

Secretary of State John Kerry was leading frantic administration diplomacy designed to spare Obama the embarrassment of delivering his address with U.S. personnel still in the custody of the Iranians in the Persian Gulf, but while the sailors are expected to be released quickly, it will likely not be before the speech.

"We have been in touch with the Iranians, we have been assured of their safety and that they will be able to move forward on their journey promptly," White House Communications Director Jen Psaki said.

However, Republican presidential candidates and lawmakers immediately seized on the incident to charge that Obama has emboldened Iran's aggressive behavior in its neighborhood by offering sanctions relief in return for a halting of its nuclear weapons program.

"This is the latest manifestation of the weakness of Barack Obama, that every bad actor... views Obama as a laughingstock," Republican presidential candidate Sen. Ted Cruz said on WRKO radio.

The GOP will highlight one of its rising stars, South Carolina Gov. Nikki Haley, who often is touted as a possible vice presidential nominee, in its official televised response to the President's address.

Haley will paint an unflattering picture of Obama's America and say the nation would soon have a chance to turn the page.

"The president's record has often fallen far short of his soaring words," Haley said in excerpts of her remarks released by Ryan's office. "Many Americans are still feeling the squeeze of an economy too weak to raise income levels. We're feeling a crushing national debt, a health care plan that has made insurance less affordable and doctors less available, and chaotic unrest in many of our cities. Even worse, we are facing the most dangerous terrorist threat our nation has seen since September 11, and this president appears either unwilling or unable to deal with it."

Haley took a shot at Obama's foreign policy record, saying a Republican president would "make international agreements that were celebrated in Israel and protested in Iran, not the other way around."

The governor will also highlight her personal story as a daughter of Indian immigrants and draw a contrast with some of the rhetoric currently on display in the primary campaign.

"Today, we live in a time of threats like few others in recent memory," she will say. "During anxious times, it can be tempting to follow the siren call of the angriest voices. We must resist that temptation. No one who is willing to work hard, abide by our laws, and love our traditions should ever feel unwelcome in this country."

With additional reporting by CNN.