Early voting amendment passes Senate, but will need to be voted on again in 2021

HARTFORD  — Connecticut voters won’t be asked anytime soon to change the state’s constitution to allow early voting. While a resolution that would h... 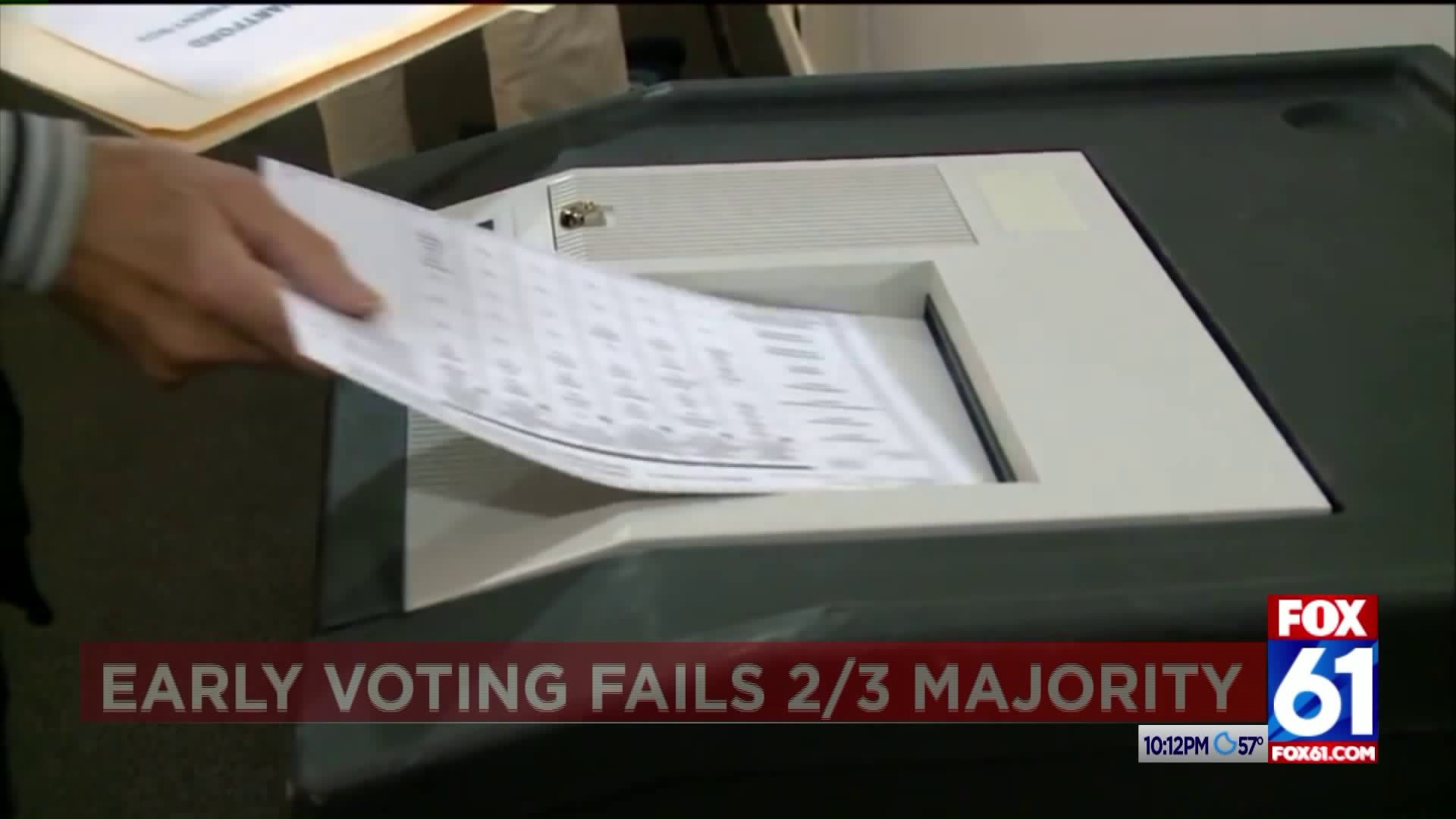 HARTFORD  — Connecticut voters won't be asked anytime soon to change the state's constitution to allow early voting. While a resolution that would have put the question on the 2020 ballot cleared the Senate by a 23-13 margin Wednesday night, 27 votes — a super majority — were needed. A super majority of the House of the Representatives last month authorized the same resolution.

Advocates now must pass an identical resolution next year in both chambers by simple majorities so the question can appear on the 2022 ballot. If that passes, lawmakers can design and vote on an early voting system.

Democratic Secretary of the State Denise Merrill says it's "disheartening" most Republican senators opposed the measure. But Senate Republican Leader Len Fasano said the legislation would "open the door to anything."

Connecticut Secretary of the State Denise Merrill said in a statement, “I’m glad the Senate passed Early Voting, however it’s disheartening that the majority of the Republican Senate caucus was unwilling to make voting more convenient for their constituents. This is especially true considering the overwhelming bipartisan support this amendment received in the House, just a few weeks ago.

“39 states have some form of Early Voting, and 40 million voters voted early in the last election; this is a reform that is widely accepted and wildly popular across the country. From Arkansas to Wyoming, there is bipartisan consensus that Early Voting allows more voters to exercise their right to vote more conveniently.

“It is shameful that only one Republican senator was willing to put the interest of their voters ahead of perceived, yet misguided, partisan advantage. This amendment wasn’t about partisanship, it was about the voters.”

HARTFORD — We saw long lines at the polls in November and some wet ballots too.

That’s why there’s a big push this legislative session to get early voting over the hurdle. The state Senate is set to take up the issue Wednesday.The issue of early voting isn’t one of the most controversial, but it is one of the hardest to get passed. That’s because it requires a constitutional amendment. Changing the state constitution means getting a super majority or 2/3rds of the votes in both the house and senate.The measure cleared the house a couple of weeks ago.

Now, the Democratic leaning senate will need to vote on it, but they’ll need Republican support. The change would allow voters to cast ballots at least 3 days before an election.Supporters say early voting would cut down on the long lines we saw on Election Day last November.

Those in favor say we should do anything we can to expand access to our basic right to vote and bring more people into the process.Paula Bacolini is the Coordinator for Make Voting Easy. She said, “We are hoping that the Connecticut voters would like to join the 39 other states because we are only 1 of 11 states that don’t enjoy this convenience of early voting and as our citizens get older and people get sick and can’t vote exactly on Election Day, if we had an extra day it would be fabulous.”

But the main concern is it would something a community would be forced to implement without getting any money from the state to do it. That’s what’s known as an unfunded mandate. There’s also concerns about fraud.

Connecticut is one of only 3 states where early voting in banned by the constitution. If it’s approved the Governor does not need to sign it, it will go straight to the ballot for you to vote on in 2020. The earliest it could be implemented is 2022.