Slippery roads cause accidents on highways and sideroads statewide

HARTFORD — An afternoon snowstorm is causing dangerous road conditions across the state Tuesday. I-84 eastbound was closed in Southington at exit 28 due t...

Slippery roads cause accidents on highways and sideroads statewide

HARTFORD — An afternoon snowstorm is causing dangerous road conditions across the state Tuesday.

I-84 eastbound was closed in Southington at exit 28 due to a tractor trailer crash, but has since reopened.  No one was injured in the crash.

Connecticut State Police said there were multiple “no injury and injury” crashes on I-91 north and south between exits 10-18, and also on 691.  Since 10 a.m. Troopers have responded to 315 traffic accidents, state police said.

For those headed northbound, on I 91, out of New Haven, traffic literally went nowhere for hours. Several separate accidents, involving perhaps a dozen vehicles, spread over a half mile stretch, between exit 9 and 10 on 91 north had the highway shutdown. And that scene was the norm. 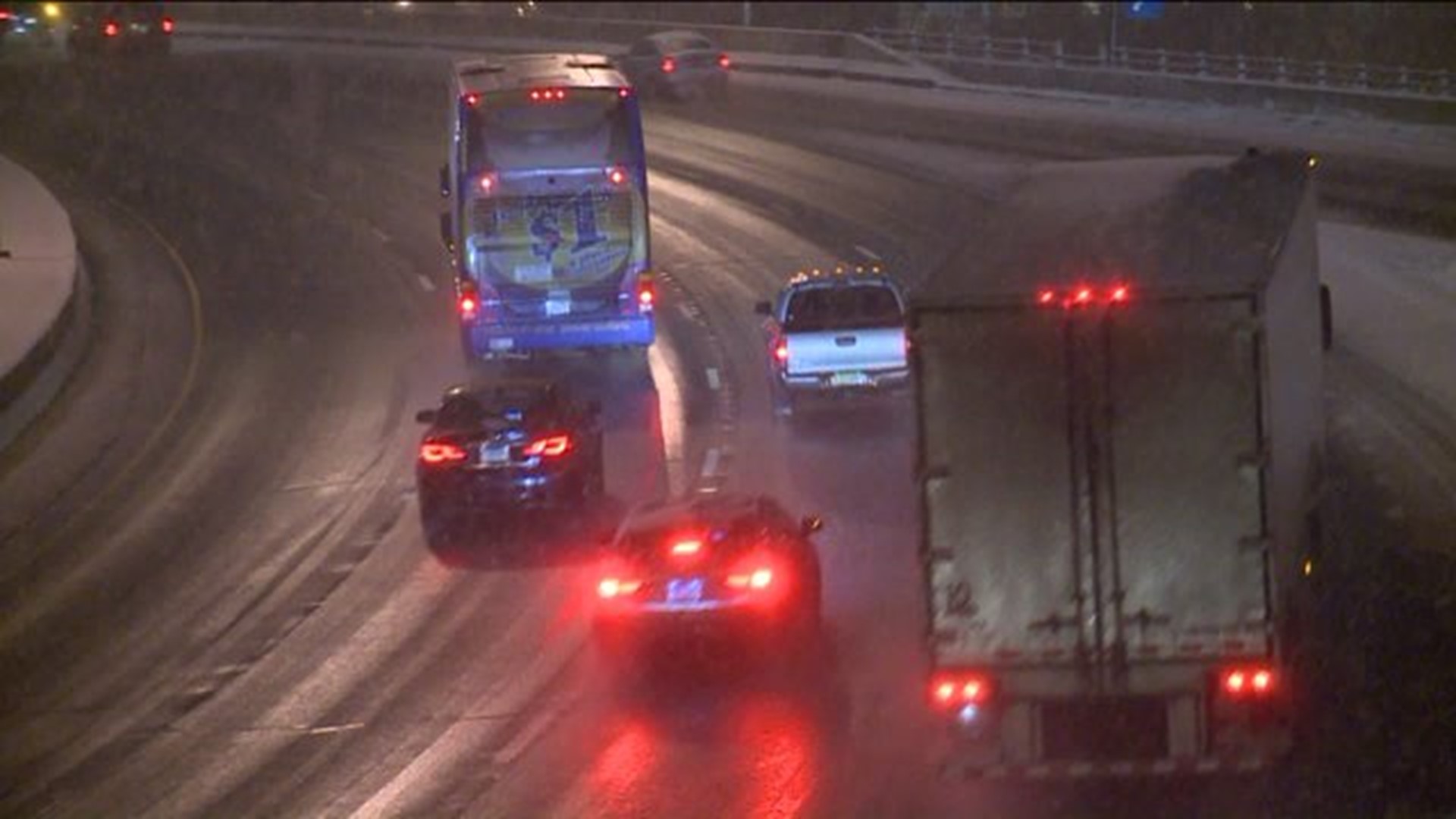 FOX 61 stopped by a truck stop to talk to drivers who have been on the roads all day.

“It's been a miserable day, just enough snow that traffic is not good,” Truck driver Rick Gage said.  “Slow down, give us some room, there`s no reason to be on our back end like they do and cut us off.”

Driver Marc Arsenault applauded the state for staying on top of the roads and treating them, but also echoed Gage in his plea for drivers to slow down. 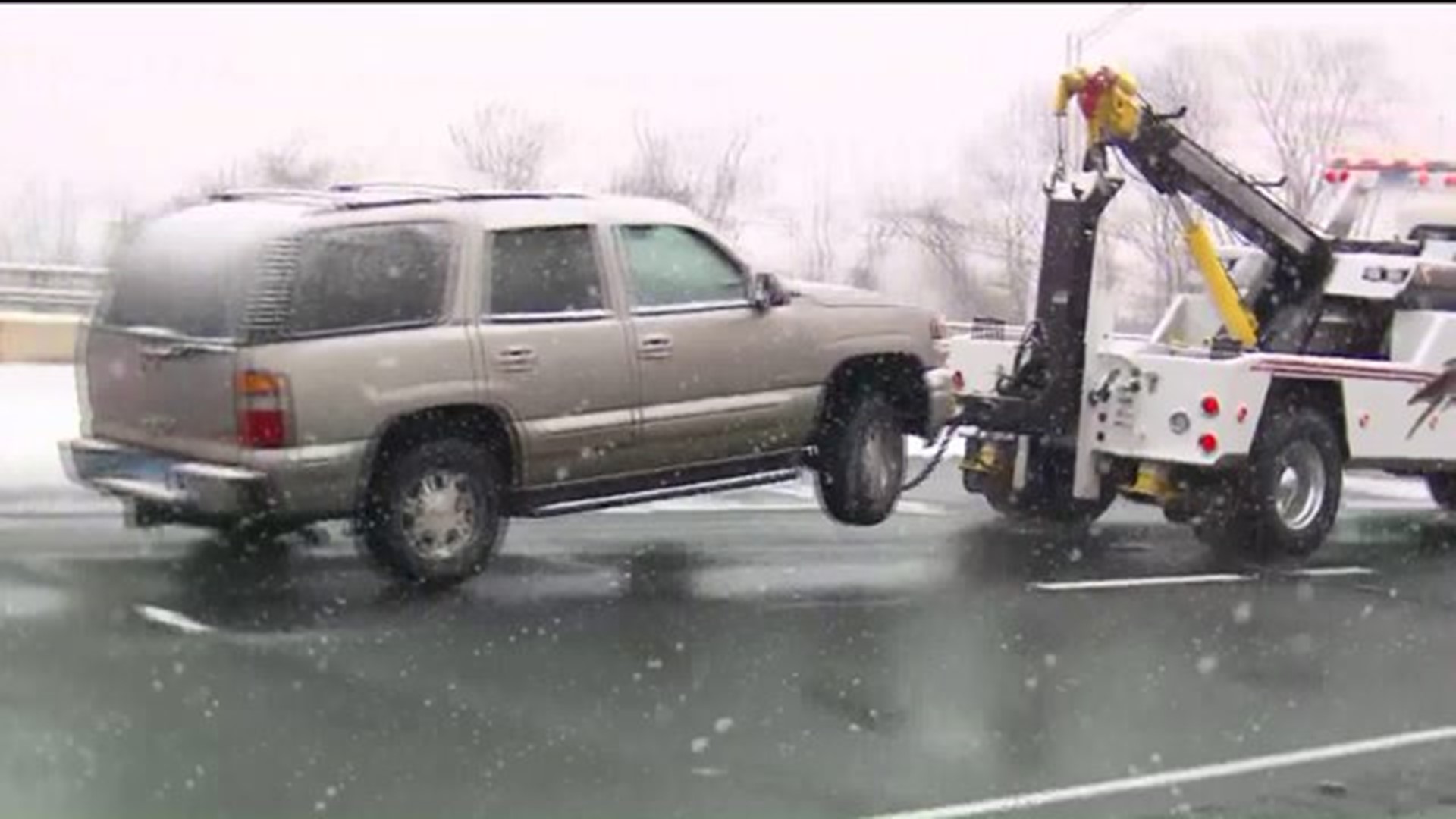 "I probably witnessed 30 or 40 spin out accidents just during the course of my ride down here," said Matt Hennessy, who was headed from Boston to New York City.

"I was in traffic for over an hour," said Heather Smith–Jackson, of Newington. "I had to get off because I was like losing gas and I was freaking out."

Over an hour in traffic can cause all kinds of trouble. "I just drank a whole water bottle. So, it was tough," said Alex Zavarella of Newington.

But, for most of the day, the highway pavement, at least in the southern part of the state, was simply wet.

The DOT says crashes, involving multiple vehicles, are almost always a product of motorists traveling too fast and too close.

"I'm getting notifications on my phone and I'm like 'oh my gosh there's like nine accidents,'" she said.

"Going southbound, we saw about two major accidents between Bridgeport and here," said Jim Evans who was traveling from his native Virginia to New Hampshire for some skiing.

"It was pretty treacherous for a while and slow going, but I feel fortunate to of been safe so far. Hopefully it stays that way," said Hennessey.

There was also a 3-car crash on I-95 south between exits 61 and 60 in Guilford, according to State Police, and Route 72 west was closed between exits 2 and 1 due to a multi-car crash in Plainville.

Hamden police said there was a multi-car crash on the Wilbur Cross Parkway, south, between exits 60 and 61. Police said at least 6 cars were involved in that crash and multiple ambulances were requested for minor injuries.

One car was reported to have rolled over near the tunnel.

There was a crash on I-91 north near exit 9 in North Haven that had the left lane closed between 11 and 12. A car went over the wire rope guide rails. Nobody was injured, according to State Police.

In Southington, a 3-car crash on I-84 west between exits 31 and 30 left only one lane open there.

Drivers of commercial and passenger vehicles are reminded by The Connecticut Department of Motor Vehicles about the requirement to remove snow and ice from hoods, trunks and roofs or face fines and penalties. The law also calls for stiffer penalties when there’s personal or property damage from the flying elements.

The DMV said drivers are exempt from the fines when the snow, sleet and freezing rain begins or continues while the vehicle is traveling. Parked vehicles are also exempt from the required removal of ice and snow.