MIDDLETOWN – Arrest warrants for nine employees at Whiting Forensic Division of the Connecticut Valley Hospital allege a repeated pattern of abuse against... 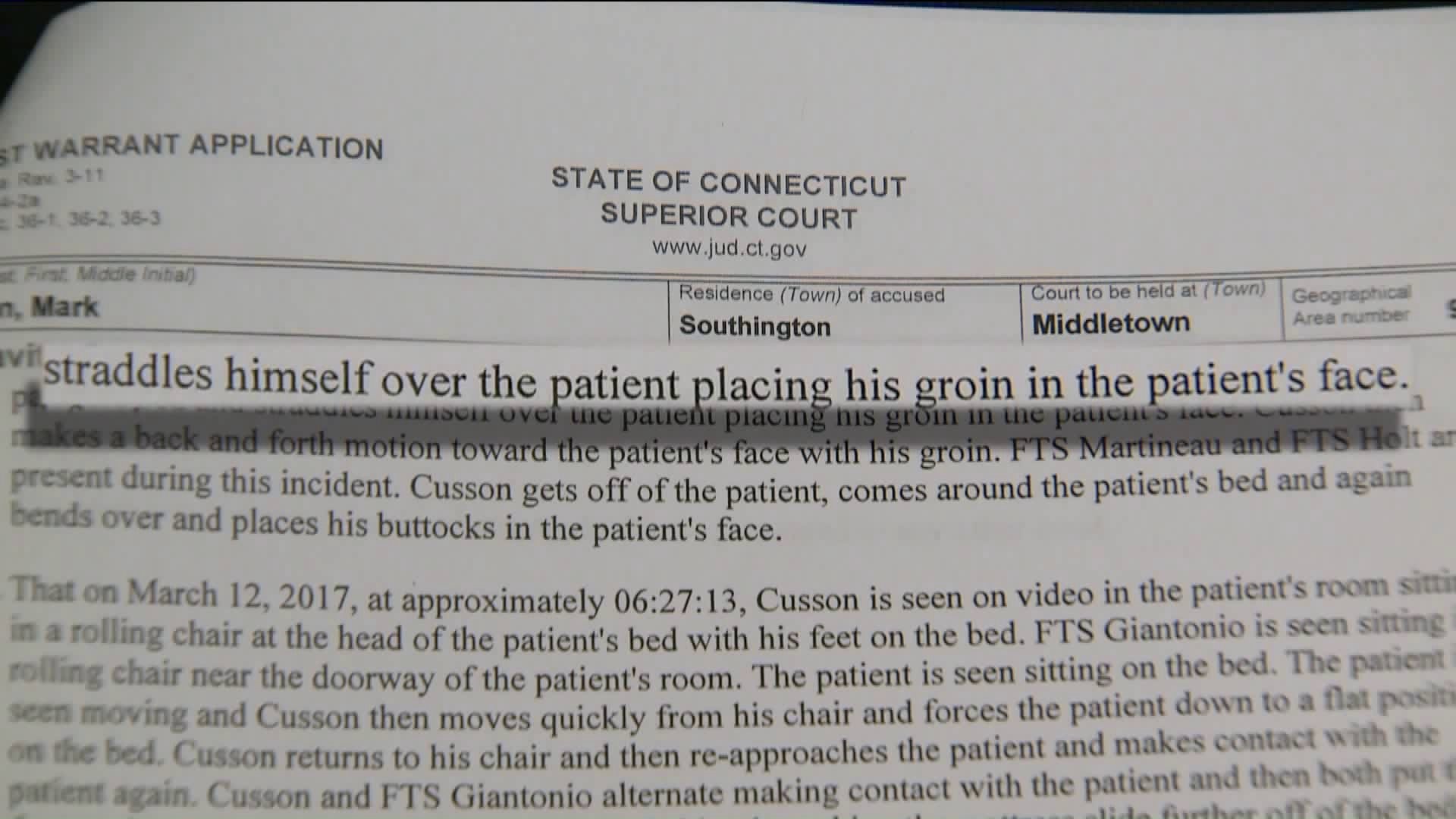 MIDDLETOWN - Arrest warrants for nine employees at Whiting Forensic Division of the Connecticut Valley Hospital allege a repeated pattern of abuse against a patient.

The warrants, previously under court order seal, were made public this week.

The patient at the center of the abuse is a 62 year old man who’s treatment orders called for a two-on-one staff to patient ration and 24-hour a day supervision.  There was video camera located in his room for patient monitoring.

Nine staff members were arrested in early September following a state police investigation into the matter.

Their newly release arrest warrants outline what police claim they witnessed on the video footage from the patient’s room. Several of the accused are allegedly seen on video kicking the patient repeatedly, in many cases while he laid in his bed.

Eight of the arrested workers are forensic specialist technicians. The ninth, Mark Cusson, worked as a forensic nurse.

Cusson’s lawyer, Stephen Woolf, maintains client’s innocence. He told FOX61, “He believes that he’s innocent, we believe we have a lot of information that is not yet available to the public.” He went on to say Cusson has been “a very dedicated long time employee of Whiting Forensic.”  He added there is more to the case than just the video, which he claims is not visually clear.

Another of the accused, Lance Camby, 48, of New Britain, is reportedly seen on the footage putting a diaper on the patient’s head, while Willie Bethea, 45, of Middletown, is allegedly seen poking the patient. He later told police he believes he “patted” the patient on the cheek but claimed he believes the “patient enjoys a degree of playful physical contact.”

In the arrest warrant of Gregory Giantonio, 43, of Deep River, it’s stated that he’s seen kicking the patient and is seen in the patient's room for some of Cusson’s alleged abuse. Giantonio told police he never abused or witnessed anyone abusing the patient.

The facility is overseen by the Department of Mental Health and Addiction Services. Following the newly released arrest warrants, they stated, “The Department remains steadfast in its commitment to ensuring that justice is served for our client. The affidavits underscore the importance of the Department’s actions to immediately involve the Connecticut State Police in the investigation into alleged client abuse.”

The following individuals have been arrested: