CARY, N.C.–Days after a photo of a dog with its mouth duct taped shut spread across the Internet, police in Cary, North Carolina have announced that they ... 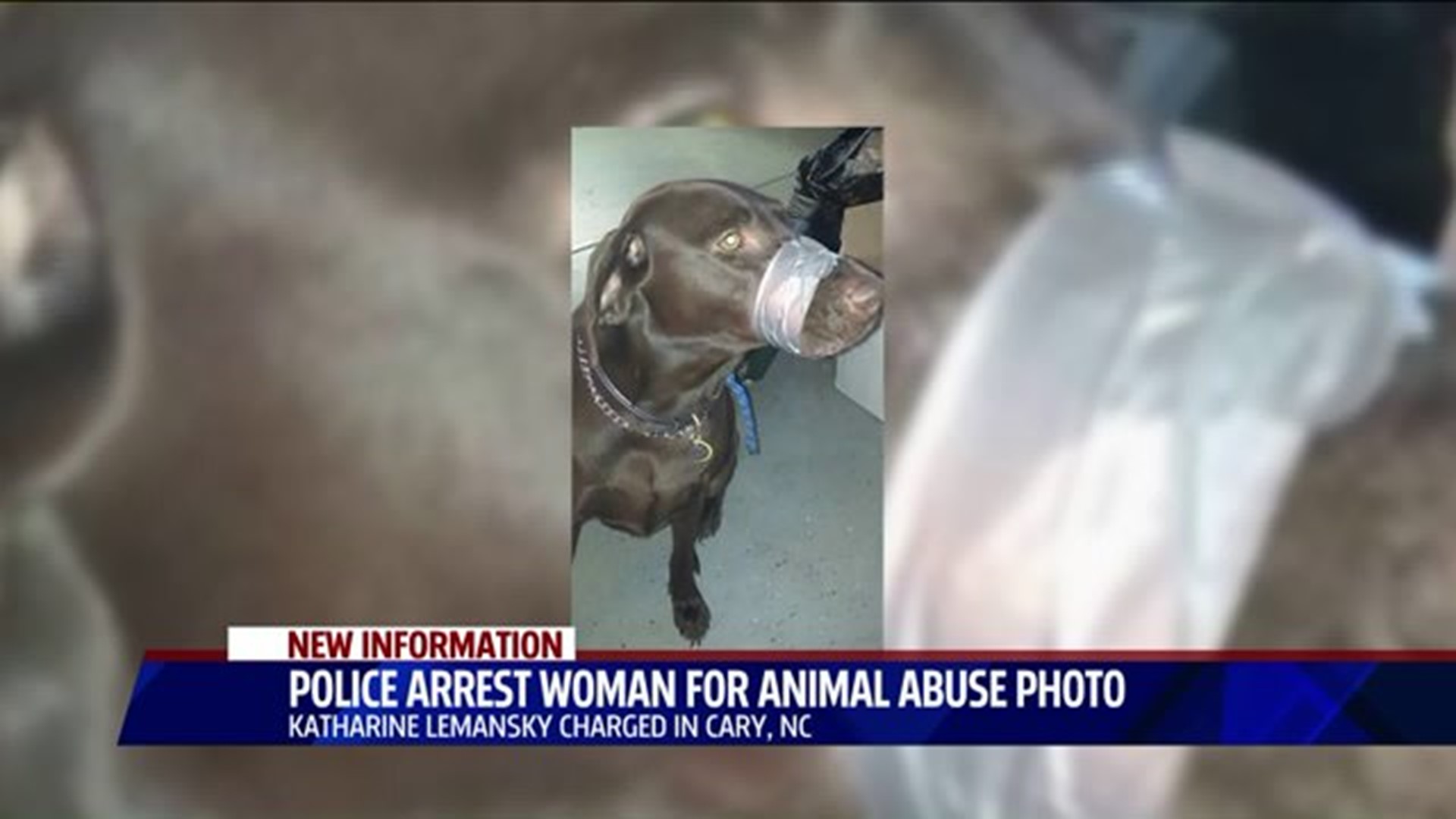 CARY, N.C.--Days after a photo of a dog with its mouth duct taped shut spread across the Internet, police in Cary, North Carolina have announced that they located the dog's owner and arrested her.

On Friday, November 27 just before 10 a.m. a person with the Facebook name Katie Brown posted a photo of her dog with its mouth duct taped shut. The caption read: "This is what happens when you dont shut up!!!"

Once comments started flooding in, she posted again, justifying her actions: "I cant lie I did it for sixty seconds. It was time out and no more barking."

She later wrote: "Dont panic everyone it was only for a minute but hasnt barked since... POINT MADE!!!"

According to the Facebook profile, the woman lives in South Daytona, Florida, but she went to school at Central Connecticut State University. Police say that she has lived in both Torrington and Avon, Connecticut.

Police and animal control departments in all three cities investigated the post, and apparently got so many emails and calls over the weekend that some of their servers crashed.

However, she ended up not being in any of those locations. On Monday, police in Cary, North Carolina, issued a press release that they had arrested Katharine F. Lemansky, 45, who had a Facebook page with the name "Katie Brown."

Lemansky has been charged with one count of cruelty to animals, a misdemeanor, and she admitted that the incident occurred in Cary.

Taping the dog's muzzle shut was a terrible decision on Ms. Lemansky's part, and charging her with animal cruelty under North Carolina law was the right thing to do. At the same time, it's important to also note that our animal control officers who physically examined both Brown and her littermate found the dogs to be very well cared for, which is why we did not and could not remove them from the owner. The dogs are current on their shots, spayed, and microchipped. They are clean and well-nourished and appear to be comfortable in their surroundings. And there were no signs of injury to Brown’s muzzle, not even detectable hair loss.

Lemansky faces up to 150 days in jail, as well as a fine, and she will next appear in court on December 14 in Wake County, North Carolina. No other charges are expected to be filed against her.

The town of Cary said that its police department worked with officials in two states to solve the case. South Daytona, Florida police contacted Cary and said Lemansky may be in North Carolina after confirming with her family members that she hadn't lived in Florida in 1 1/2 years. Avon, Connecticut police also confirmed that Lemansky no longer lived in the home she had once resided in. She was then tracked to Cary and arrested.

Public outcry appears to have sped up the investigation, as several hundred thousand people shared the Katie Brown Facebook post before she took it down or made her account private.