Kate Wilson always wanted to be a mother. That dream came true when she was chosen to adopt four siblings in need of a forever home. 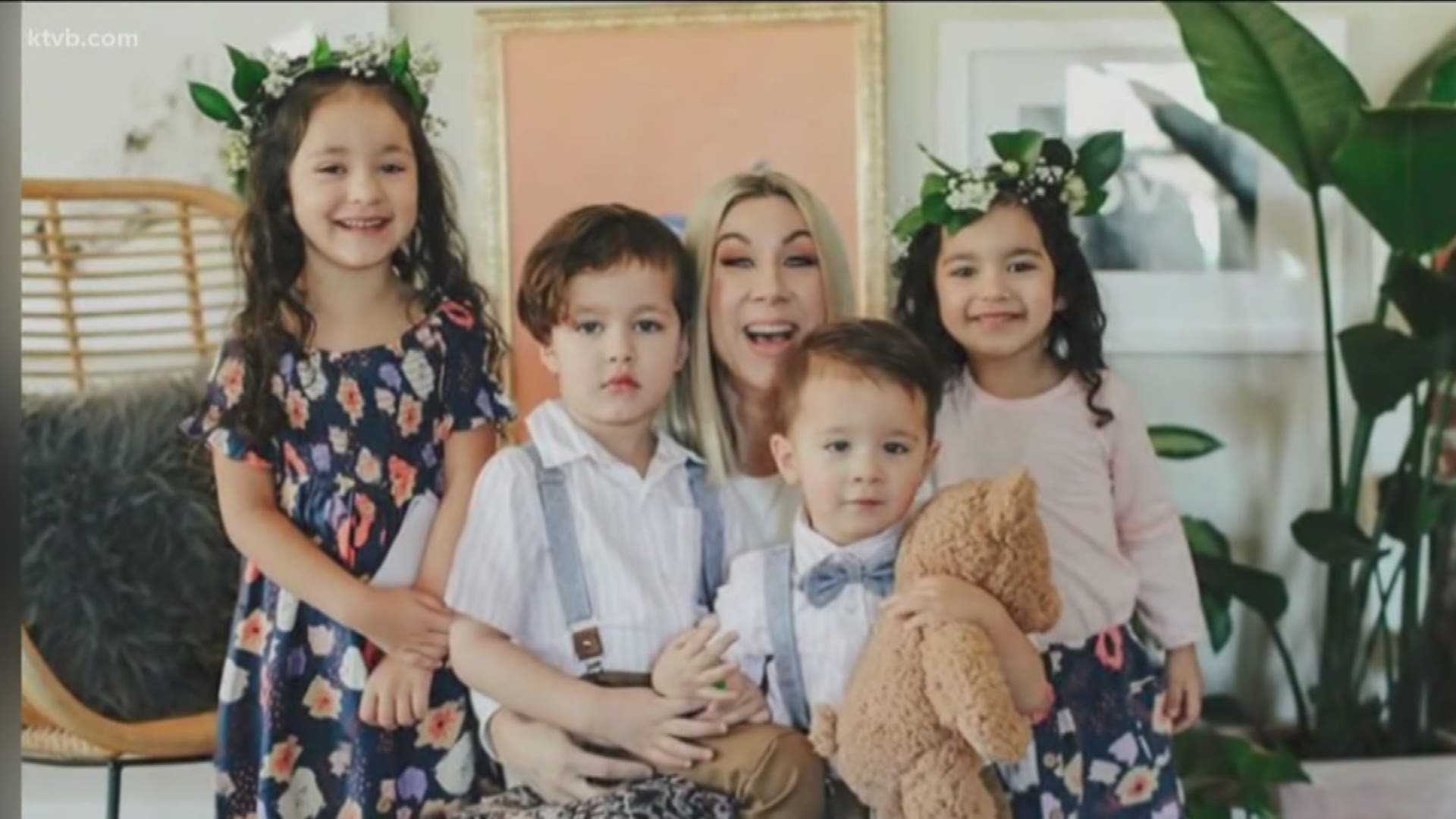 BOISE, Idaho — Kate Wilson of Boise always longed to be a mom. Her twenties went by, and in her thirties, even though she was still young, she was worried she wouldn't get that chance.

“You see everyone in your life get married and have children,” Wilson said. “You think, okay, is this ever going to happen for me?”

Wilson told KTVB that adoption was something she had always considered.

“I’ve always had a heart for adoption since I was 7-years-old. I've always wanted to adopt kids, and I just expected I would get married and adopt,” Wilson said. “So, in 2018 I basically was like 'I'm done waiting, I'm not going to say one day anymore, I'm going to do it now by myself'.”

Wilson was single and decided to go through the process to become a foster mom. She hoped that process would one day lead her to adoption.

“So, I signed up January 1 of 2018. I finished my training in March and I got my first child in June,” Wilson said. “She was with me for six months, and I got to help her reunify with her mom, and that was an amazing thing, and so rewarding to see that happen.”

It can be heartbreaking, but Wilson said that’s the goal of foster care; to care for children and create healthier families.

That doesn’t always happen though. She could not have imagined what would happen next. She got another call for the placement of another little girl.

“When I saw her, I also met her siblings, the oldest boy, the middle little girl and the baby boy and I was like 'I'll take them all',” Wilson said.

She wanted to foster all four of the siblings, all under the age of five, two boys, and two girls.

“Yep, just fell right in love with them. They were just amazing kids,” Wilson said. “Instantly I was like, 'I want all of them.'”

Over time, all four of the kids were placed in her home. Wilson quickly realized it would take time to earn their trust.

In March of 2019, Wilson got the news she had been hoping for. The kids were eligible for adoption.

“We had to go to a selection process to find out who would be the best choice for them to be adopted by, and then they selected me,” Wilson said with pure joy. “They basically decided and I completely agree, that siblings are best together. I just knew that God brought them into my life for a reason, and I knew that this is something that I was called to do. They were destined to be my children!”

Wilson said the kids’ biological mother just isn’t able to give them what they need.

"She's just in a position that she's not able to parent right now, so it's been a beautiful story of us coming together as moms,” Wilson said. “She is happy that I have them, we were able to talk about the adoption, and we hugged each other and cried together and we both came to the conclusion that this is best for the children.”

Wilson hopes their biological mom will be a part of this new chapter.

“I would like her to be a part of the kids' life, yes,” Wilson said. “I feel like it’s important for them! They have cousins, and they have people in their life that love them, so I think the more people that love them and encourage them, the better.”

In the months leading up to the official adoption, the anticipation of becoming a family grew.

“Every single day they would ask me - is it adoption day? I wanted this to happen since I was a kid, so it was so surreal living that dream,” Wilson explained.

When the big day finally arrived in early 2020, Wilson had family come to town from all over. The kids were over the moon. The adoption ceremony was filled with love.

“They were so happy because that anticipation had been there for so long,” Wilson said. “They are just so glad they don't have to ever leave, and that's what they needed. They needed that security in their heart to know they are permanently with me, no one is going to take them away.”

Tears flowed as Wilson signed the adoption papers, and the judge declared them a family!

1 / 4
Kate Wilson
Kate Wilson made the selfless decision to adopt four siblings in need of a home after the children had been relocated in several different foster homes.

“The emotion in that moment and the finality that they are never leaving me was overwhelming, and also to have all my friends and family there to support me and love on my kids,” Wilson said. “I think that I knew these people loved me, but to watch them love my kids and accept them as their own is amazing.”

The party continued with a big reception.

“I kind of viewed it as a wedding, because we were joining a family in a different way together, not a husband and wife, but a mom and her kids," Wilson said, "So I decided to do a reception and we had dancing and all kinds of stuff, it was so fun, it was the best day ever."

Wilson said motherhood is her greatest joy, and celebrating her first Mother’s Day is extra special.

“It's everything I ever hoped and dreamed but soo much more,” Wilson said. “It's just the best thing ever.”

For more information about foster care and adoption, click here.

RELATED: 7’s Hero: People in the Treasure Valley step up to help others in need during the COVID-19 pandemic

See all of the heartwarming segments in our YouTube playlist here: