Two male suspects were seen in the act Friday morning on Charles Street before fleeing the scene in a Light Blue SUV. 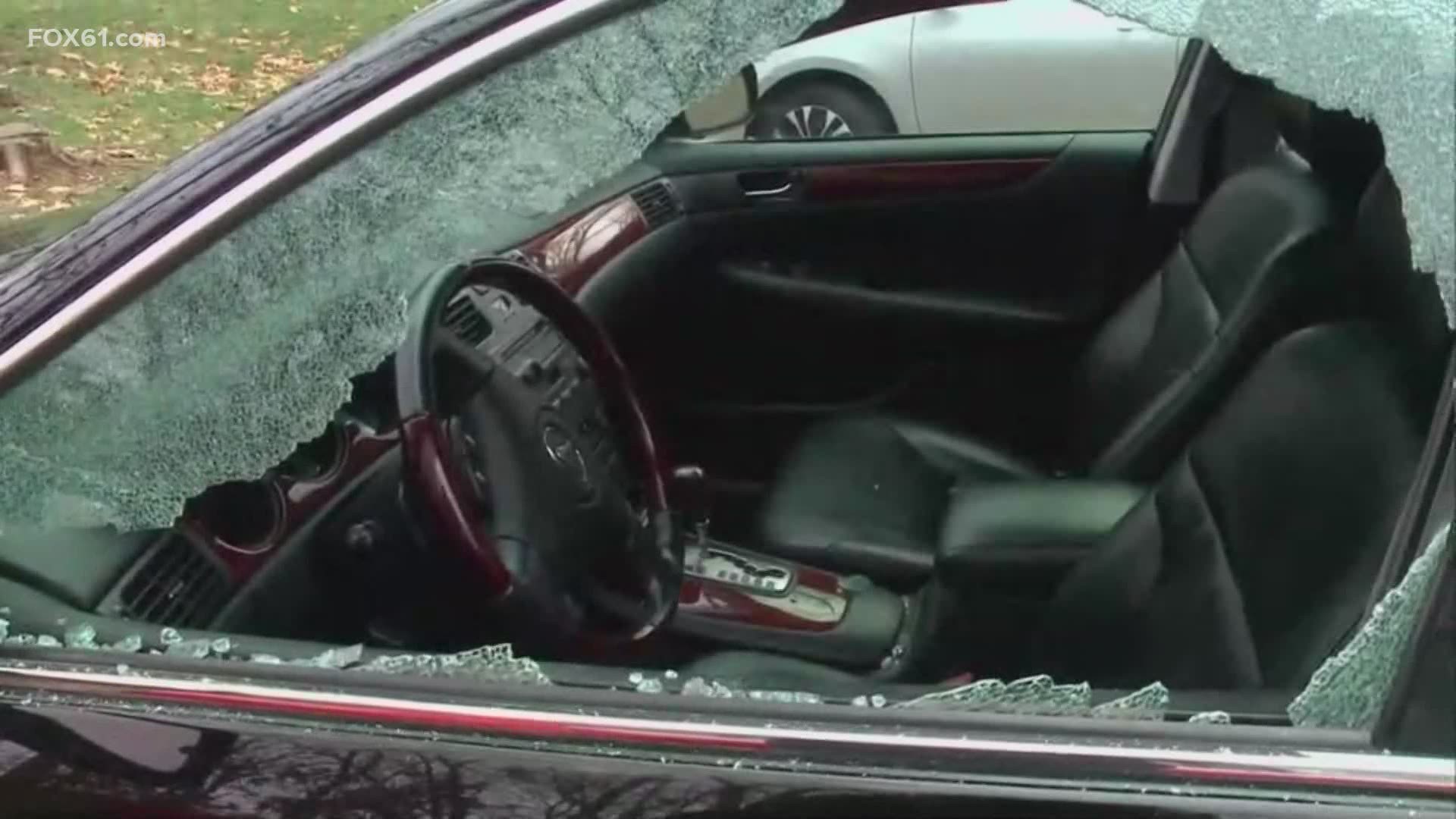 MERIDEN, Conn — It was just the other night when more than 100 cars had their windows smashed in Newington.

About 12 miles south of Newington, there was another wave of break-ins in Meriden.

RELATED: After an epidemic of car break-ins, victims check to see if they're covered by insurance

RELATED: Over 100 cars broken into in Newington overnight

"We don't deserve this. None of us deserve any of this," said Marc Dinuzzo of Meriden.

Dinuzzo came out to him and his girlfriend's car windows smashed, their 400 dollars stolen and an open glove box.

They live at The Atrium Condominiums on East Main Street where close to ten cars were broken into. Dinuzzo's Friday morning was spent on the phone with his insurance company and had to lose a day of work.

Glass from car windows all over the parking lot of The Atrium on East Main St in Meriden. Up to 8 cars were smashed into. This is not including several other locations in Meriden. pic.twitter.com/ZXQLiTB6H4

"These are people's lives, you know what I mean? Not everyone has the means to pay for these windows to get fixed," added Dinuzzo.

Meriden Police said more than 40 cars were broken into during the overnight hours. This included locked and unlocked cars.

They said while officers were patrolling the area of Charles Street Friday morning, they saw the suspects hop onto I-91 northbound.

Officers tried to pursue them but eventually had to end the chase with fear it would put other drivers at risk since the suspects were driving very fast.

The suspects were spotted in a blue Honda Pilot, the same type of car spotted in Newington two nights before. Police would not confirm that it was the same vehicle. The Pilot was recovered in Hartford Friday morning abandoned.

A resident at the Tracy Gardens Apartments shared a surveillance video with FOX61 where you can see the Pilot stop, a person gets out and wiggles a car door, reaches inside the car then a second person stepped out of the Pilot.

The suspects did not stop there - they targed the Alvista Willow Brook Apartments and then the apartments on Hanover Avenue. Residents there also felt on edge. 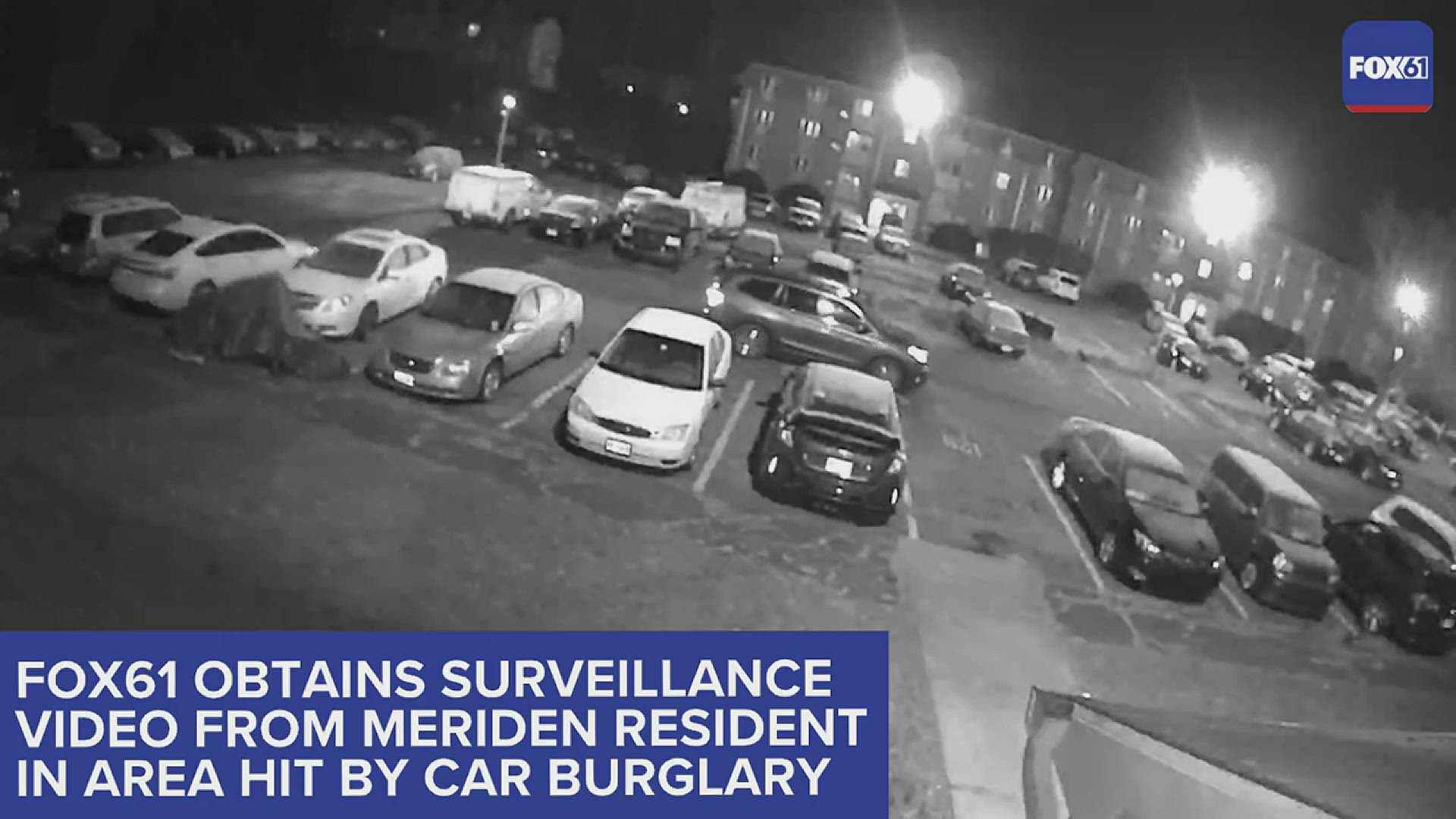 "You work hard for what you have, and you don't want anyone to just think that it's okay to come and take it," said
Deapria Schuler-McKnight of Meriden.

Waterbury Police Fernando Spagnolo commented on the rise of car thefts and break-ins. 4

"We have a special dedicated task force that works closely with state and other communities," said Spagnolo.

Meriden Police is reminding everyone to never leave any valuables in your car and to always lock your doors.

If you have any information or if you have spotted the suspects, you are urged to reach out to police immediately.

RELATED: Newington PD reveal door hangers left to warn residents they may be vulnerable to a crime