More than 1,000 Mainers gathered at City Hall Wednesday evening for a rally to listen to stories, speeches, and poems for organizers and leaders. 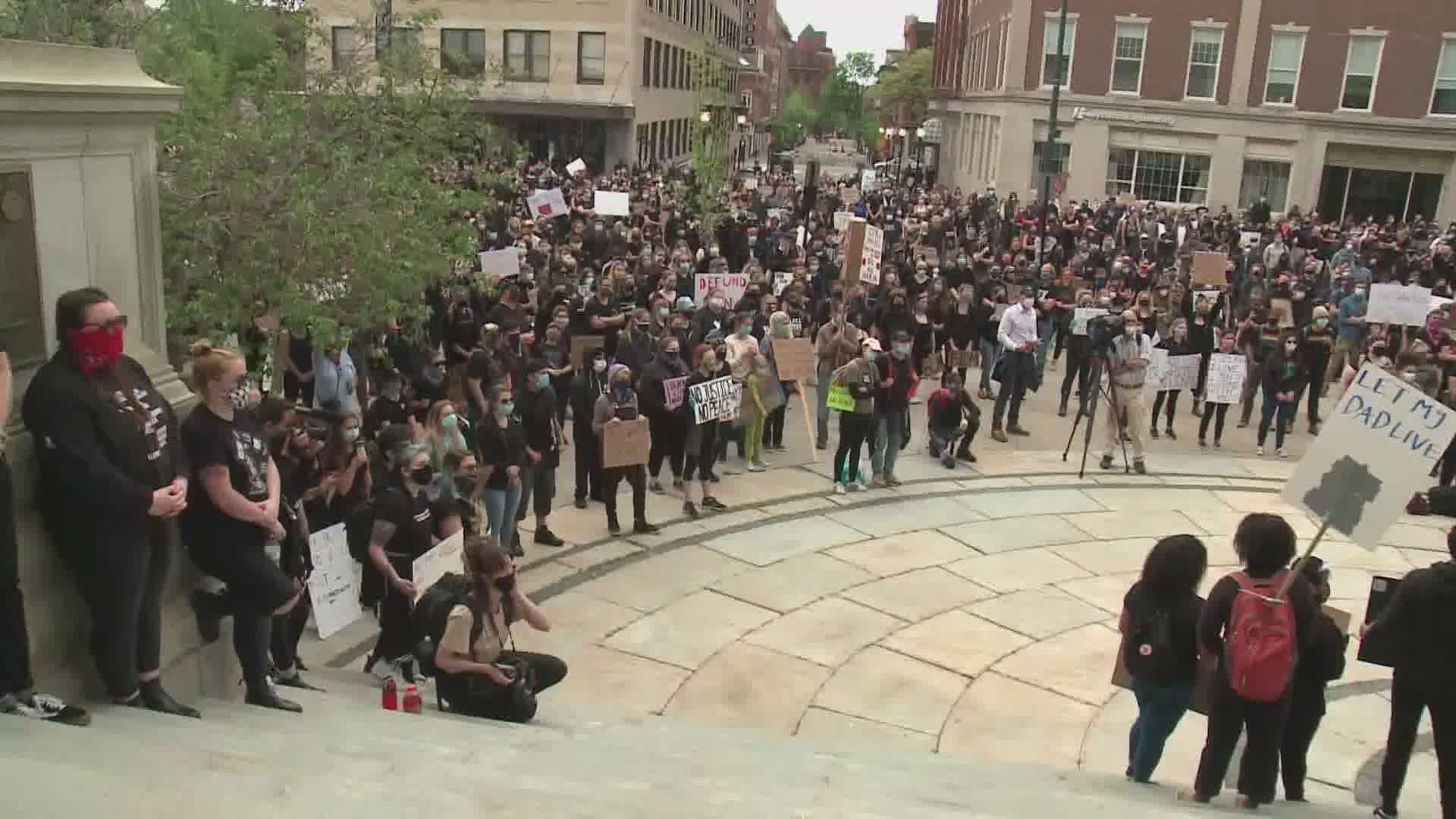 PORTLAND, Maine — It’s been over a week since George Floyd was killed in police custody in Minneapolis, sparking protests against police brutality and racism in America across the country and around the world.

Minneapolis police officer Derek Chauvin was fired and charged with third-degree murder and second-degree manslaughter in Floyd’s death last week. On Wednesday, charges were elevated to second-degree murder, and the other three officers involved were charged as well.

On Wednesday, a protest organized by Hamdia Ahmed began at 4 p.m. at City Hall in Portland.

"We are asking everyone in the community come together to address institutional and systemic racism," the event listing on Facebook says.

"We need everyone to join us and listen to the black community in Maine. We are sick and tired of waking up to videos of black people being murdered. We deserve to be treated like human being [sic]. What happened to George Floyd was so horrific to watch. We must demand justice for black people."

The main protest and rally ended around 6 p.m. and remained peaceful. Similar to previous night's protests, a smaller group didn't leave and instead headed to the Portland Police station.

The group seemed to peacefully disperse around 8 p.m., but regrouped later at Monument Square, and then went back to the police station.

NEWS CENTER Maine will continue to monitor the gathering and will keep this story updated.

Portland Mayor Kate Snyder said she would be attending the peaceful protest on Wednesday. The Mayor has posted she is "outraged" and "stunned" by George Floyd's murder.

Organizers are calling on Portland Police Chief Frank Clark to "listen to the voices of black people."

Portland Police Chief Frank Clark, as well as other police departments in Maine, have shared messages of support with protestors and condemned the Minneapolis Police Department for Floyd's killing.

Clark said, "We understand why you're here. We saw the video, we have the same concerns."

So far there have been 33 arrests made in connection with protests in Portland. Though most have remained peaceful, as organizers are urging, tensions with police in riot gear seem to heighten after dark.

During Monday and Tuesday nights' protests, following completely peaceful demonstrations, police and organizers urged people to go home peacefully. On Tuesday, a small group of around 100-200 people remained and went to the Portland police station.

Officers announced a disperse order and said those who did not leave would be subject to arrest. A small group of protestors set off firecrackers and instigated as officers deployed disperse tactics, such as closing in on protestors to close streets and firing pepper ballers, which are like paintball guns but shoot out balls of pepper gas.

Earlier in the evening, an organizer, Devin Moore, shared a message of peace with NEWS CENTER Maine's Hannah Dineen.

"I see a lot of things online about people talking about like the looting and the rioting and it just, like, kills me when the violence drowns out the message of why we’re all out here in the first place," Moore said.

"We’re all out here for love. Whether Black Lives Matter is the chant, it’s bigger than the black lives. We’re asking for our lives to be valued, yes, but we just want to be treated the same so that we can all get along here in this country."

NEWS CENTER Maine is continuing its live coverage of the protests.

This story will be updated.

Photos from the Portland protest on Sunday:

1 / 14
Gabrielle Mannino/NCM
A protester yells while on his knees as the group lies down in the street during the Black Lives Matter protest on Sunday, May 31 in Portland.