Proud to Serve: Clinton K-9 unit leaving a lasting impact on the community

CLINTON — A little over two and a half years ago, the Clinton Police Department began working to implement a K-9 Unit. After a long application process an... 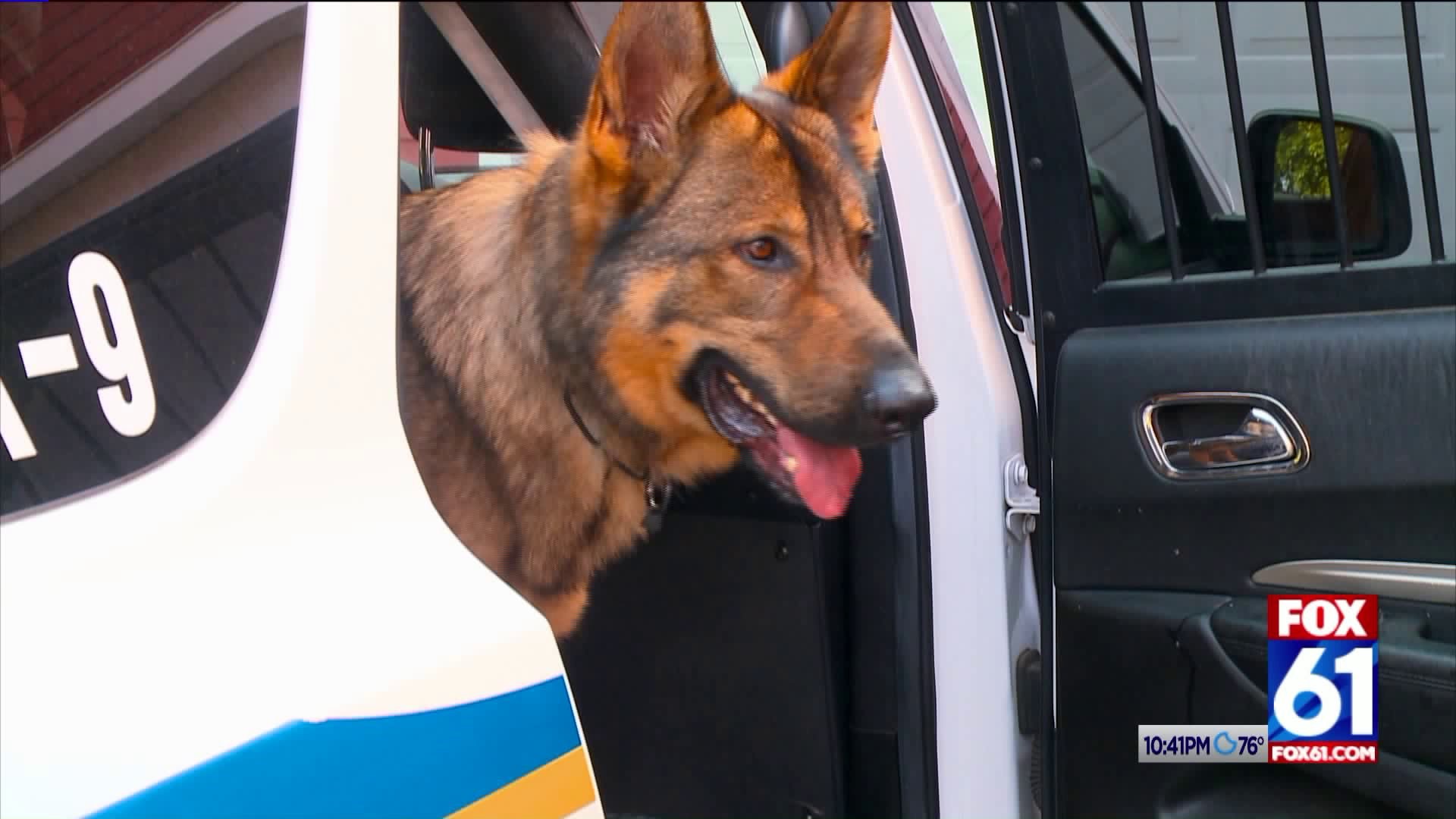 CLINTON -- A little over two and a half years ago, the Clinton Police Department began working to implement a K-9 Unit.

After a long application process and months of difficult training, Corporal Jason Frey and his four-legged companion Sonny would begin patrolling the streets.

Together, they have left an impact on the community beyond anything they could have imagined.

Sonny is a four-and-a-half-year-old German shepherd. Sonny and Corporal Frey make up the Clinton Police K-9 Unit. They are partners 24/7 no matter where they are or what they do.

In a demonstration, we hid heroin under a pile of equipment. We tried our best to throw Sonny off the trail but soon he catches on.

Barrels of fun tonight! Sonny strapped on his @firststatek9 Predator Harness with his @gopro mount and went to town. Besides chasing bad guys and finding drugs, this is one of Sonny’s favorite things to do. If he were on a dating app, you could bet your a$$ this would be the first thing mentioned in his hobbies . . . . . #germanshepherd #K9 #K9unit #PoliceK9 #furmissile #policedog #whelen #landshark #Police #K9Sonny #K9Handler #GSD #K9Partner #germanshepherd24 #dogsofinstagram #workingdogsofig #gsdofinstagram #rawmeatdiet #K9strong #gsdstagram #youarewhatyouread #workingdogmagazine

When Sonny finds what he’s looking for he sits. Then, Sonny is rewarded with his paycheck: A toy.

Work is exciting for Sonny but that doesn’t mean it’s all fun and games.

“He’s not a pet. He’s not our mascot. He’s a working dog,” said Clinton Chief of Police Vincent DeMaio.

“He’s a tool. This is his toolbox," said Cpl. Frey. "You generally only take the tool out of the box when the tool is needed.”

A tool that saves a police department valuable time and resources in a profession where seconds count. Whether in a field or an attic, opioids or evidence, Sonny will find it keeping others out of harm's way.

“One officer now with a dog is equal to five or six officers,” said Chief DeMaio.

“Those are officers we didn’t have to send in their blindly,” said Cpl. Frey.

His presence alone is enough to de-escalate a situation which the department says can’t be quantified.

“Believe me when Sonny’s presence is known it’s known," said Cpl. Frey. "He has a nice growl to him, and it gains almost immediate compliance.”

No two working dogs are the same. Each handler and K-9 requires a special relationship, dedication, and trust.

“Sonny reads humans better than humans can read dogs. He tells me everything I need to know. I just had to learn how to listen to him," said Cpl. Frey. "He is a full-time work dog but he’s also a part-time therapy dog in his own way because he brings a lot of smiles to a lot of people’s faces.”

“Things took off like I never thought they would,” said Cpl. Frey.

With 46,000 followers and counting, their Instagram has sparked letters, pictures, and messages to be sent from all over the world bringing them closer to the community they serve.

“You have the kids that reach out to you saying 'Hey, I want to be a cop one day. I love watching you and Sonny'. I get all the requests that come in. It really is overwhelming,” said Cpl. Frey.

Cpl. Frey never thought he’d be doing this, not to mention with Sonny by his side. He says he underestimated the time and impact being a handler would require, but he wouldn’t take any of it back.

“If I just had the ability during my career to impact one life, to touch one person in a positive way. That their life was different because of my presence in it. I would consider that a success,” said Cpl. Frey. “Now fast-forward years later now I have a dog that I feel like he does that multiple times a day.”

A relationship that's unbreakable, well beyond the thin blue line.

Cpl. Frey credits his relationship with Sonny for pulling him out of his shell. He says Sonny has made him a better person and officer.

The Clinton Police Department is always looking for support for Sonny. You can always donate directly to the Clinton police K-9 unit through the department. Chief DeMaio says all donations to the K-9 unit will go directly to supporting Sonny.