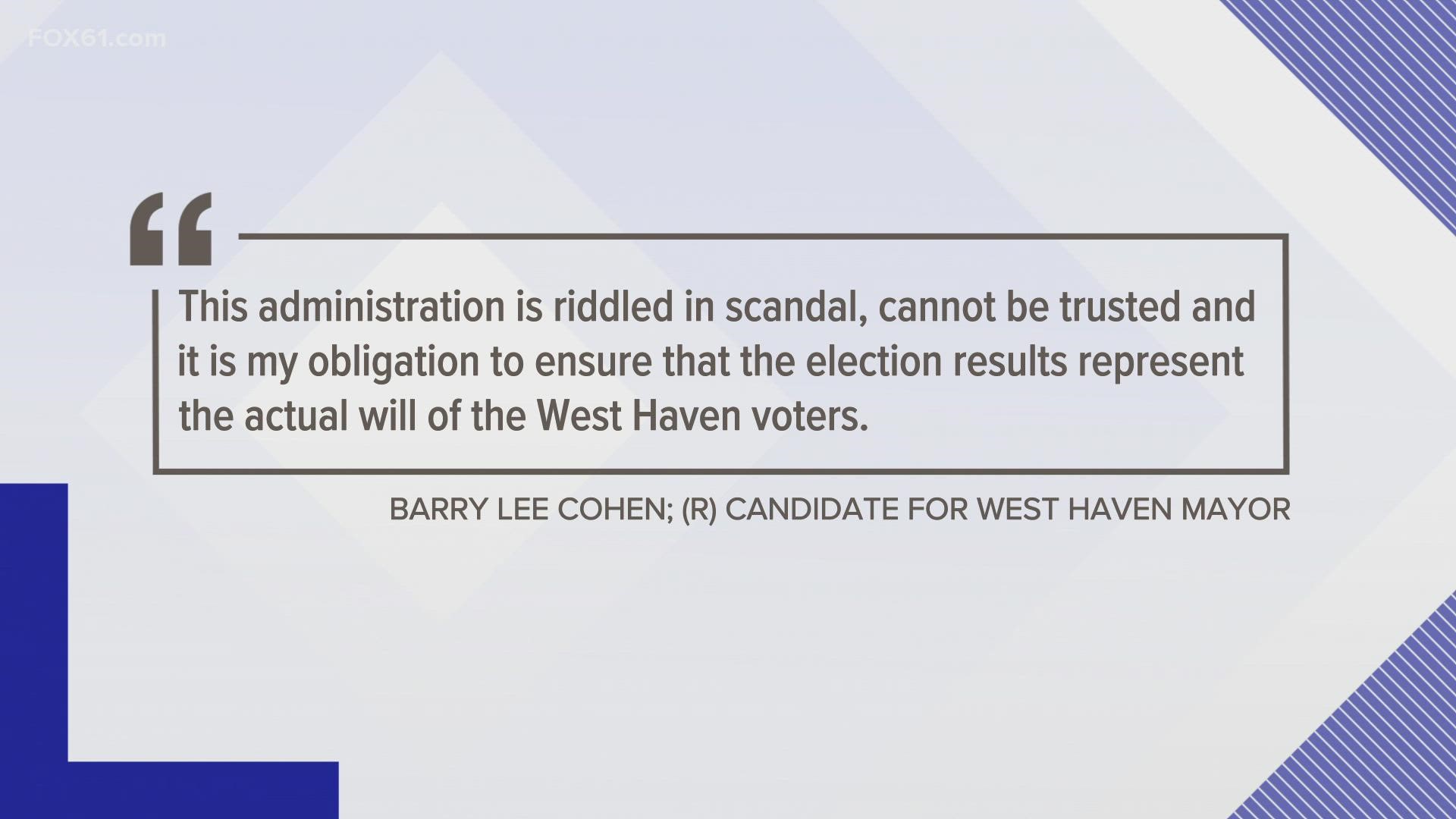 WEST HAVEN, Conn. — In the wake of West Haven's mayoral election, a lawsuit has officially been filed by the Republican challenger.

Barry Lee Cohen is suing democratic incumbent, Mayor Nancy Rossi, along with the city over those election results. Rossi officially secured another term after a recount separated her and Cohen by just 32 votes.

Town officials, including the city clerk and the democratic and republican registrar of voters, were named in the suit.

"Although I have been denied access to public records related to the municipal election, from what we have seen, and from what we have learned from people, there are significant irregularities with the absentee ballots cast in the election," Cohen said in a statement

Cohen also argued that some of those ballots should have been rejected if they did not meet state requirements.

The GOP challenger claims statutory procedures were ignored, and now his team is asking the City Clerk to give them access to all materials related to the election.

In a statement, he noted that some believe he should accept the race results and move on. In fact, that would be an easier path for him, he added.

However, he said the city deserves better than that.

"There are simply too many open questions and concerns to just walk away," Cohen added.

"There are irregularities in the election process. The law was ignored. Votes were allowed to be cast from people that do not live in West Haven.  This administration is riddled in scandal, cannot be trusted and it is my obligation to ensure that the election results represent the actual will of the West Haven voters. This is not about me.  This is not about concession or litigating.  It’s about ensuring the integrity in our election.  This matters."

RELATED: On eve of recount, GOP challenger calls for West Haven mayor to 'step aside' regardless of results

The West Haven mayoral race was contentious with a cloud of corruption allegations hanging over it.

Former state Rep. Michael DiMassa resigned from office a week before the election. His resignation came after he was accused of stealing more than $636,000 in COVID-19 relief funds.

The Secretary of the State's office said DiMassa's resignation is effective immediately. The matter has been continued until a preliminary hearing, scheduled for December 10. DiMassa faces one count of wire fraud and up to 20 years in prison.

After Rossi's confirmed win, Cohen announced he was still asking Rossi to step aside regardless of the recount. But, Rossi said she will not resign.

“I have no reason to resign. I have not done anything incorrectly or or wrong and as you can see, that has so far played out,” Rossi said.

FOX61 reached out to Mayor Rossi's team and the City of West Haven for comment on the lawsuit, but have not yet heard back.