INDIANAPOLIS–They did it! The UConn women defeated the Syracuse women’s basketball team 82-51 to win the NCAA championship. It was the team’s ...

INDIANAPOLIS–They did it! The UConn women defeated the Syracuse women’s basketball team 82-51 to win the NCAA championship. It was the team’s fourth-straight national title, a record-breaking feat.

A crowd of fans and students gathered at Gampel Pavilion to watch the game, and boy were they excited to see their classmates kill it on the court. 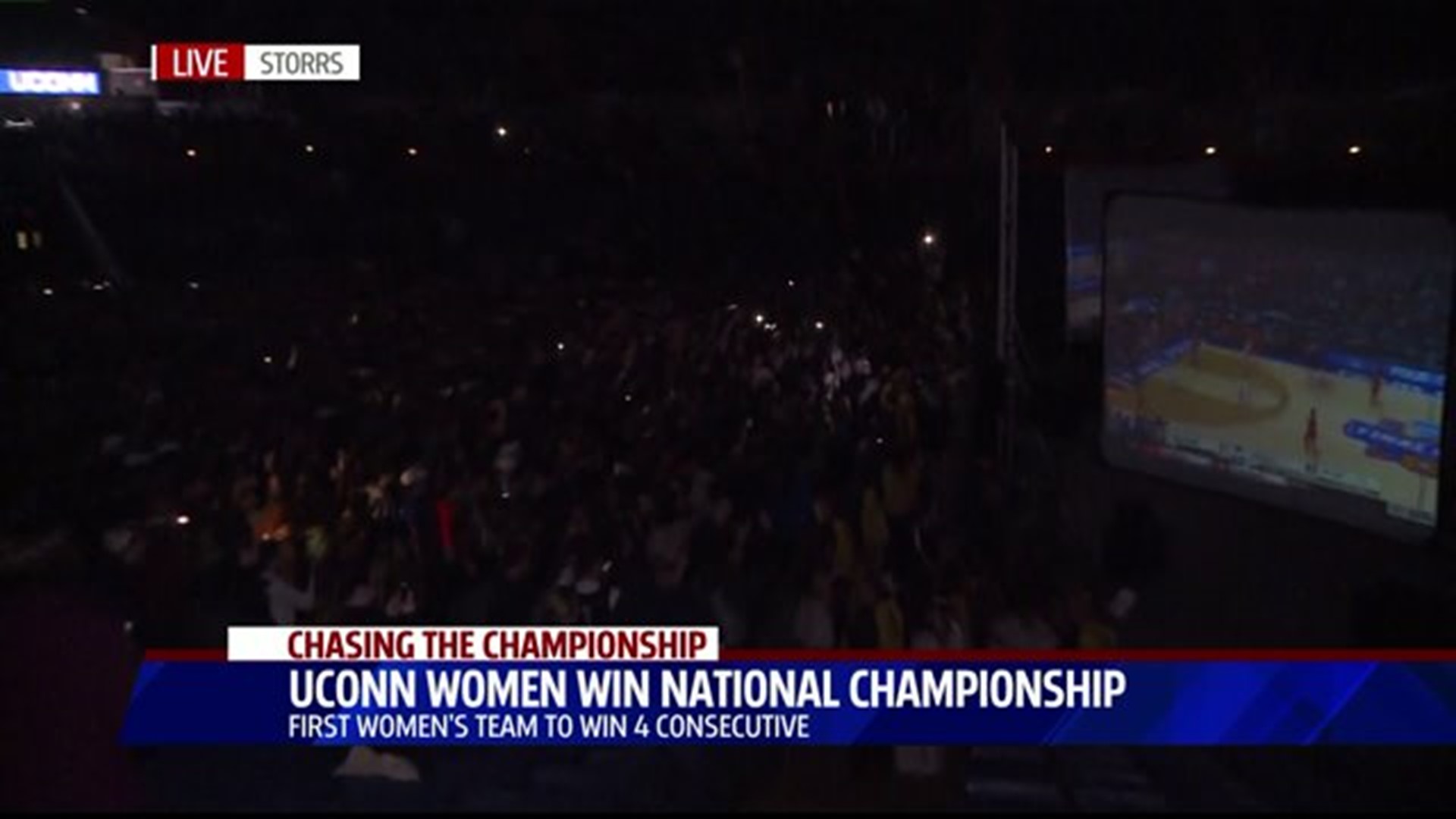 The excitement leaked outside minute after the final buzzer rang, but the elation was sure to continue for hours--or more likely days--on the Storrs campus. 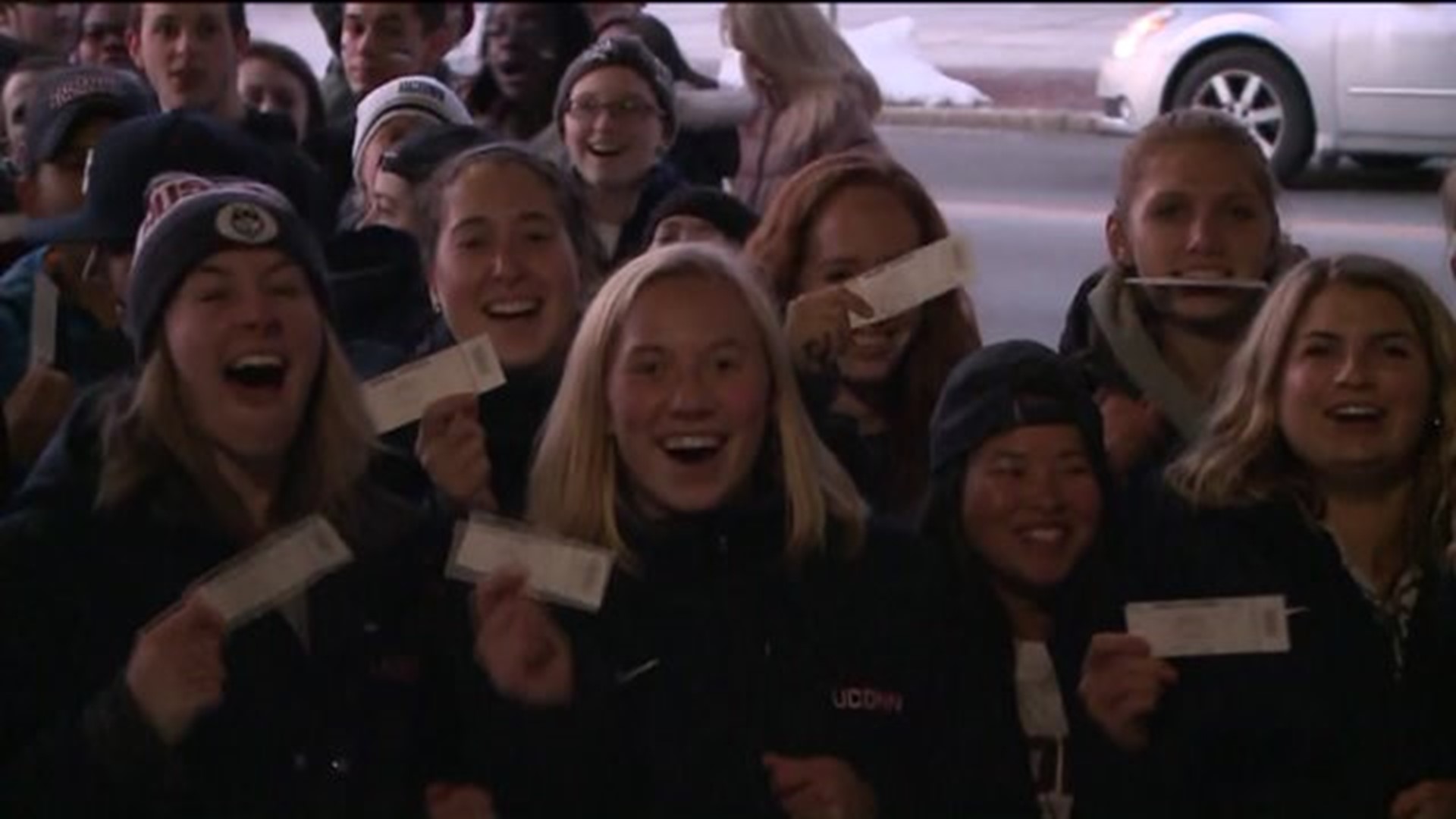 Another amazing stat to come from the came: Breanna Stewart needed just six points to tie former Husky Dianna Taurasi for fourth place on the NCAA Tournament all-time scoring list, and she made it in the first quarter. She came into the game with 422 points in tournament games. Stanford Star Nnemkadi Ogwumike is third on the list with 444 points.

UConn being UConn. Huskies scored the first 9 points of the game and lead Syracuse 13-4. Breanna Stewart has 7. pic.twitter.com/AchIeN5e1w

This was the team's fourth-straight national title--every year Breanna Stewart has been on the team--and 10th total. This was the first appearance in a championship game for the Syracuse women.

Gov. Dan Malloy released a statement congratulating the team on their big win:

The Huskies have dominated women’s basketball this entire season.  What the remarkable women on this team have done is nothing short of extraordinary.  I congratulate the entire team on bringing an eleventh NCAA championship title back home to Connecticut.  Coach Auriemma has once again done a remarkable job, and he will go down in history as one of the greats.  UConn has once again reminded the entire nation why Connecticut continues to be the official home of college basketball.  This is an extraordinary moment for our state to celebrate.

UConn storms out to a 28-13 lead at the end of Q1. Stewart leads them all with 10 points. #NationalChampionship pic.twitter.com/BIlrl4SYeO

Right at the buzzer as the first quarter ended, Moriah Jefferson made an impressive three-pointer to cinch the team's 15-point lead.

Moriah with another buzzer beater! @UConnWBB leads Syracuse 28-13 at the end of Q1. #Going4Eleven pic.twitter.com/pvJYuTlPcr

Former Big East rivals, the teams have since parted ways as the Orange moved to the ACC and the Huskies joined the AAC. Leading into the championship, the Huskies (37-0) had won 74 straight games. Syracuse (30-7) has lost its last 23 meetings with UConn, a skid that dates to 1996.

The Huskies played down one starter after Katie Lou Samuelson injured herself over the weekend. Sophomore Gabby Williams replaced Samuelson, who broke her left foot in the Huskies semifinal win over Oregon State. The other starters are Breanna Stewart, Morgan Tuck, Kia Nurse and Moriah Jefferson.