Virginia spends none of $9 million grant on midterm election security

Yet with the midterm elections now 55 days away, Virginia officials conceded they have not moved swiftly enough to use any of the money before November. 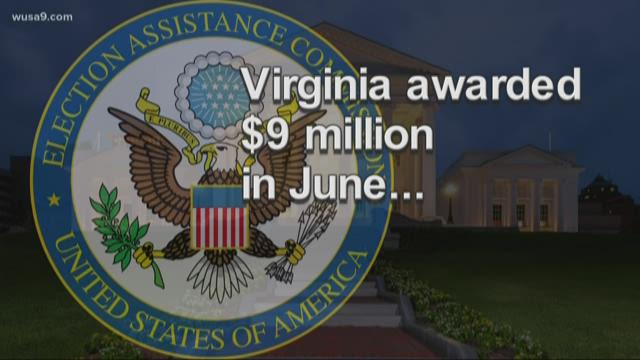 RICHMOND, Va. – Days after officials in Washington disclosed none of a $3 million grant is securing the District’s midterm election infrastructure, the same story played out across the Potomac – on a scale triple the size.

Virginia received a $9 million grant from the federal government – a new investment designed to improve election security in the face of undiminished hacking threats.

But the critical swing state with several competitive House races will spend none of the $9 million to prepare for the midterm elections, according to interviews and record requests reviewed by WUSA9.

Virginia received the multi-million dollar federal grant in mid-June, according to officials with the U.S. Election Assistance Commission (EAC).

Yet with the midterm elections now 55 days away, state officials conceded they have not moved swiftly enough to use any of the money before November.

A state elections spokesperson stressed the funding would be used in the near future, a sentiment echoed by Virginia Gov. Ralph Northam’s office Wednesday.

“The Department of Elections has plans in place for the use of these funds, which will strengthen our ongoing efforts to preserve Virginia's election security and to stay one step ahead of bad actors,” said Ofirah Yheskel, the governor’s spokesperson.

But when officials in Richmond were asked to produce documents specifying what, if any, midterm security spending had taken place, an official sent a one-line email reply within a day.

“We have no records responsive to your request,” said Arielle A. Schneider, chief FOIA officer for the Virginia Department of Elections.

Under the state’s proposed plan for the funding, nearly $6 million will be eventually directed towards new cyber-security initiatives.

Although Virginia voting machines do not have direct connections to the internet, concerns have grown that hackers could attempt to alter vote totals once the numbers are submitted to the state.

No federal dollars are devoted to new Virginia voting booth equipment, and no spending dates besides the grant’s beginning and end are made available in public documents.

According to the EAC, most states plan to use their funds within the next two to three years.

The storyline found in Virginia now follows a familiar path.

The federal government awarded Washington, D.C. a $3 million grant to protect the integrity of its residents’ votes. But the D.C. Council has not yet authorized the grant’s use.

The EAC sent Washington the federal funding in June. But the D.C. council adjourned in July without taking action. The council returns from recess Sept. 17.

But the most optimistic timetable to make the first investments could be early in the fall, only days before voters head to the polls.

“I can’t be sure what we will actually be able to use before November,” said Rachel E. Coll, a spokesperson for the District of Columbia Board of Elections. “We are hoping that by October the funds will be loaded and ready for use.”

In Maryland, the State Board of Elections was unable to pinpoint any specific midterm security spending allocated from its $7 million EAC grant.

Officials in Annapolis could only identify training they believed the grant money had funded, without offering specifics. Messages with Maryland election officials asking for more clarity have not yet been returned.