The statue located on Grand Street was vandalized overnight. 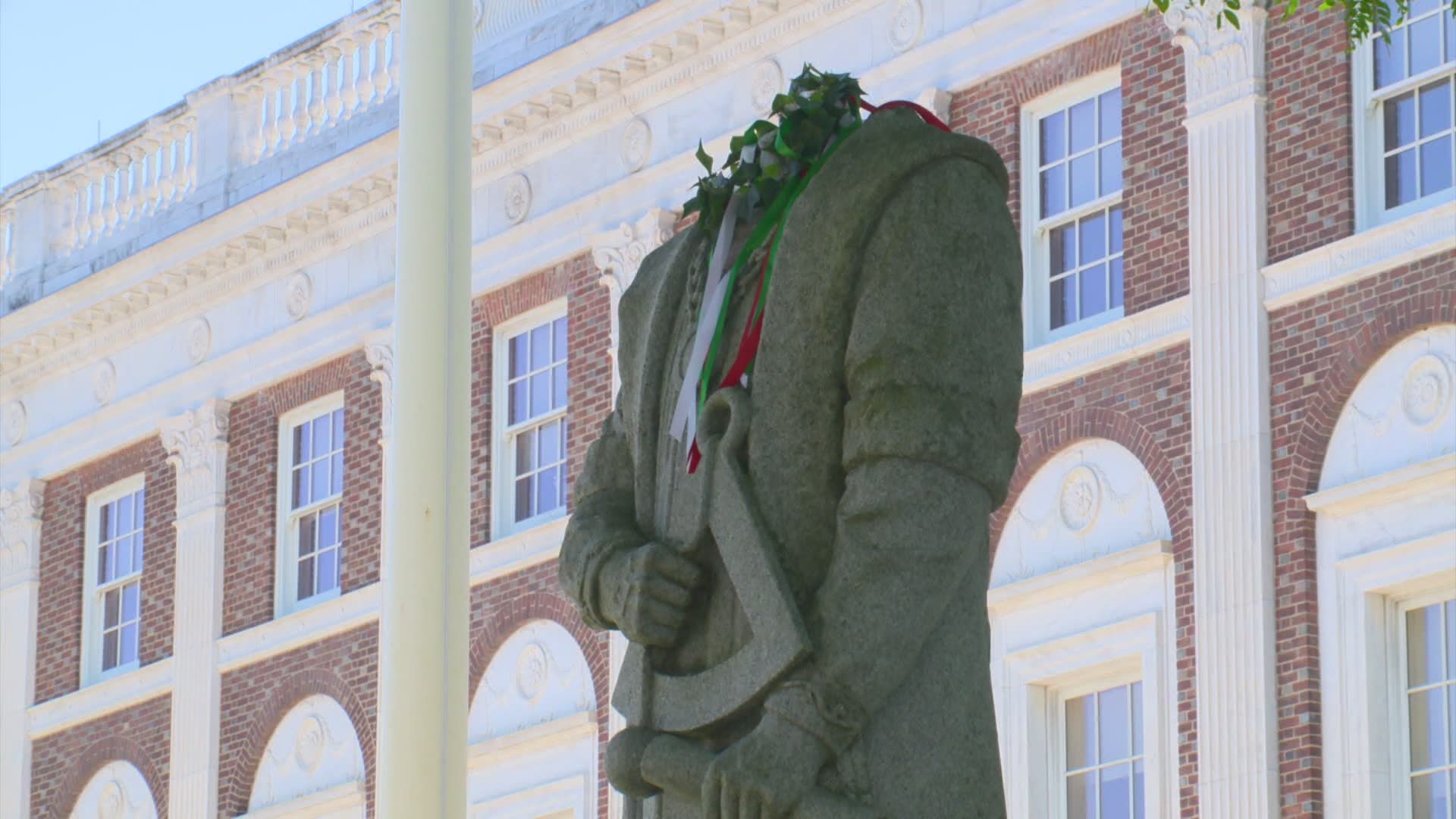 The vandalization comes after several statues of Columbus have been removed across the state, bowing to new awareness about the explorer's history, and to concerns about the safety of the monuments.

Protesters and protectors of the monument faced off with each other on Tuesday night. The two sides argued, but there was no violence or vandalism.

On Saturday protesters said that this whole incident may have been unavoidable.

Demetre Coles explains, “So people are frustrated with that, you know, if we keep talking, going about this "the right way" and 'things are getting done about this the right way,' then what’s left?”

Protesters like Coles say they’ve tried to bring awareness that the Christopher Columbus statue didn’t represent the city in today’s time and say whoever did this mirrors the thoughts of many rallying against the man behind the statue.

Coles said, “He’s the symbol of the transatlantic slave trade, you know he raped, he committed genocide, he’s a mass murderer, he tortured, and that’s the history that needs to be taught about him.”

Waterbury Mayor Neil O’Leary sent out a statement saying he is disappointed and disturbed by the incident.

“I am deeply disappointed and disturbed by the destruction inflicted upon the Christopher Columbus statue today. The City of Waterbury, and I as Mayor, are deeply committed to taking action to address the impact and inequities caused by systemic racism. However, this type of behavior is unacceptable and will not be tolerated.”

Those thoughts echoed by over 2-thousand people who signed a petition to keep the statue up, and the Waterbury chapter of UNICO, the Italian-American organization which originally helped erect the statue in 1984.

“It was very shocking and heart-wrenching thing to wake up to especially on Independence Day, the Fourth of July, we’re supposed to celebrate America and someone you know actually attacking another American basically,” said Francine Nido.

UNICO is raising money to fix the statue but also offering a 5-thousand-dollar reward for any information leading to an arrest.

Nido said, “You can’t just go and vandalize something that belongs to someone else and it’s a crime and violence is not the answer... ever.”

Hadiyah Sacky who is a protestor disagrees, she said, “The fact that you are more saddened by the death of a statue than the deaths of thousands of black people across the United States that, that is worrying, that is troubling.

Protesters say the Black Lives Matter movement is more than the events surrounding the Christopher Columbus statue as they marched to the police station to have their voices heard mentioning their anger against the arrests of over 20 people from the first weekend of protests at the end of May.

Alyssa Hughes said, “We will hold the Waterbury police accountable and if the Chief of Police Fernando Spagnola does then we will demand that he be terminated.”

Her thoughts were echoed by Justice Allah who said, “We’re here to stand up and we’re here to put our foot down, we’re tired of you guys sitting here and belittling us, making us feel like we do not matter.

Going forward people who joined the rally say things need to change here in the city.

Red Aponte said, “Now is the chance unfortunately with these pandemics, now is the chance for us to finally come out and speak up out ourselves at risk, to put ourselves in danger and take this back home to our families so that other people who haven’t listened to us