Waterbury's Fire Chief says the fire quickly erupted after people working on a scooter at ground level and its fuel was in the atmosphere. 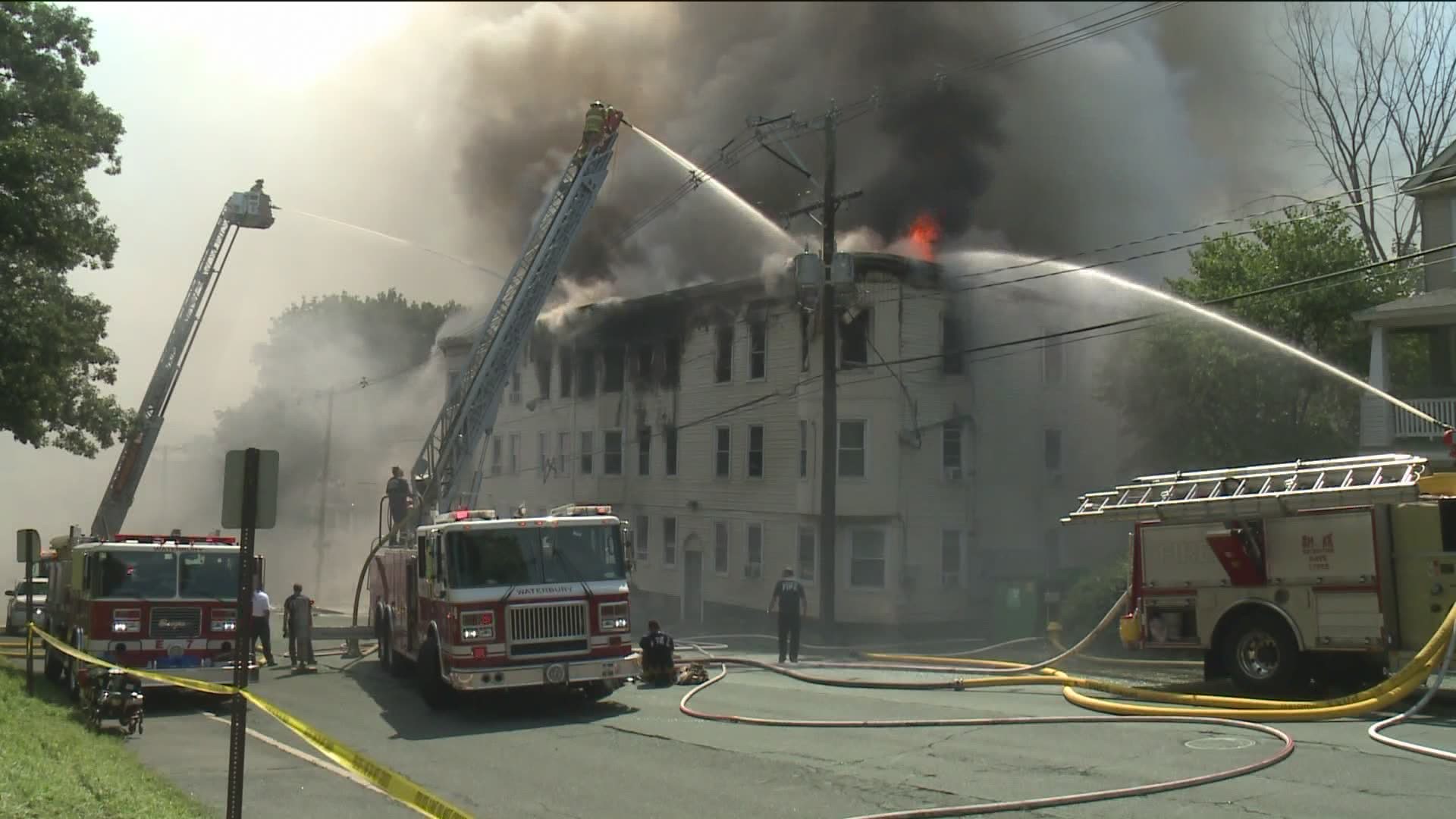 The Waterbury Fire Chief has reported that the victim in Monday's fire has been identified as 68-year-old Elias Koulis. The cause of the fire has been listed as accidental.

Waterbury Fire Chief has identified the victim of the fatal fire, at the corner of Colley and Robbins Streets Monday as 68 year old Elias Koulis. 🙏🏻 The official cause of the fire: accidental. @FOX61News pic.twitter.com/Nl1liyVrZy

MORE DETAILS: Waterbury Fire Chief, Terrence Ballou, says people were working on a scooter, at ground level, and, due to the presence of fuel, from the scooter, the fire very quickly. @FOX61News pic.twitter.com/p85VunAR3S

Waterbury fire crews returned to the scene of the fire that killed a man in his early 70's Monday to put it out for good. Officials say it rekindled around 10:30 a.m. Tuesday.

OUT FOR GOOD Waterbury fire officials now done dowsing a hotspot that rekindled in one of the burned out apartment building’s partitions just after 10 o’clock this morning. They say it’s not unusual at all for this to happen following large fires. @FOX61News pic.twitter.com/0CsxUcz4BE

A large fire, reportedly started by a moped, has destroyed a Waterbury apartment building and a two-family house, resulting in the death of a man, who couldn't get out.

Sources tell FOX61 the body of a 71-year-old resident of the apartment complex, on the corner of Colley and Robbins Streets, was discovered by firefighters at approximately 4 pm Monday, according to a city source.

Waterbury's mayor confirmed in a statement that the fire "claimed the life" of a resident.

The demolition of the two-family residence was largely complete by 5:00 p.m. However, crews were holding off on taking down the 12 unit apartment building, from which 35 residents were displaced, as the body needs to be removed first.

Residents of the mixed-use building, which included a first-floor market, were sent scrambling just before 10:00 a.m.

"I was in my room and I heard crackling sounds and I looked," said Kenny Williams, a resident. "My window blew open. The fire almost hit me."

He is rehabilitating from a traumatic brain injury. A member of his rehabilitation team was in his apartment when the fire broke out.

"The only thing I could do is run and get my staff and say 'yo, we got to get out of the house,'" Williams said. "She said 'what’s going on and I said 'there’s a fire.' And then, boom! Right through my kitchen."

“I’m deeply saddened by yesterday’s devastating fire on Colley Street that claimed the life of a Waterbury resident, and uprooted the lives of 14 families. The city immediately contacted the American Red Cross, who responded to the scene to assist families with immediate needs, and provide comfort kits,  recovery envelopes, and community partner referrals. I’d like to thank the Waterbury Fire Department, the Waterbury Police Department, and all those involved for their  quick response, and their commitment to our residents despite the personal dangers they faced.”

FATAL FIRE: Sources tell @FOX61News the body of a 71 year old male resident was discovered just after 4 pm inside the charred remains of a 12 unit apartment building that went up in flames, along with an adjacent two family house. Demolition has begun. pic.twitter.com/Q92jd3h8hc

"I can’t thank him enough," said a teary-eyed Kali Sastrum, Williams Therapist. "He saved my life. We ran as the flames were coming down the stairs."

She said it was as if the flames were chasing them.

"I’m able to go home to my son and my husband," she added. "If it wasn’t for him, I would’ve been stuck in there."

While a 71-year-old man, who had a hard time getting around, according to residents, was killed. His neighbor made it out of his third-floor window.

"There’s a pole on the side of my building," said Al-Tariq Heath, a resident. "So, I grabbed it and I shimmied down a little bit. I got down to about the second floor and I jumped off."

Another source tells FOX61 the fire may have been started when residents were working on a moped or scooter on an apartment porch.

"Before the fire, I left out and I seen them messing around with the moped, but I didn’t think nothing of it," said Keila Porras, a resident. "Then, I get a call that the house is on fire."

She rushed back home because her 3-year-old daughter was there with her cousin next-door. They were able to get out.

35 residents of the 12 unit apartment building were displaced. The adjacent two-family house is also a total loss.

The Red Cross says it is helping ten families impacted by the fire, 21 adults and five Children on Colley Street, and three families on Robbins Street --10 adults. 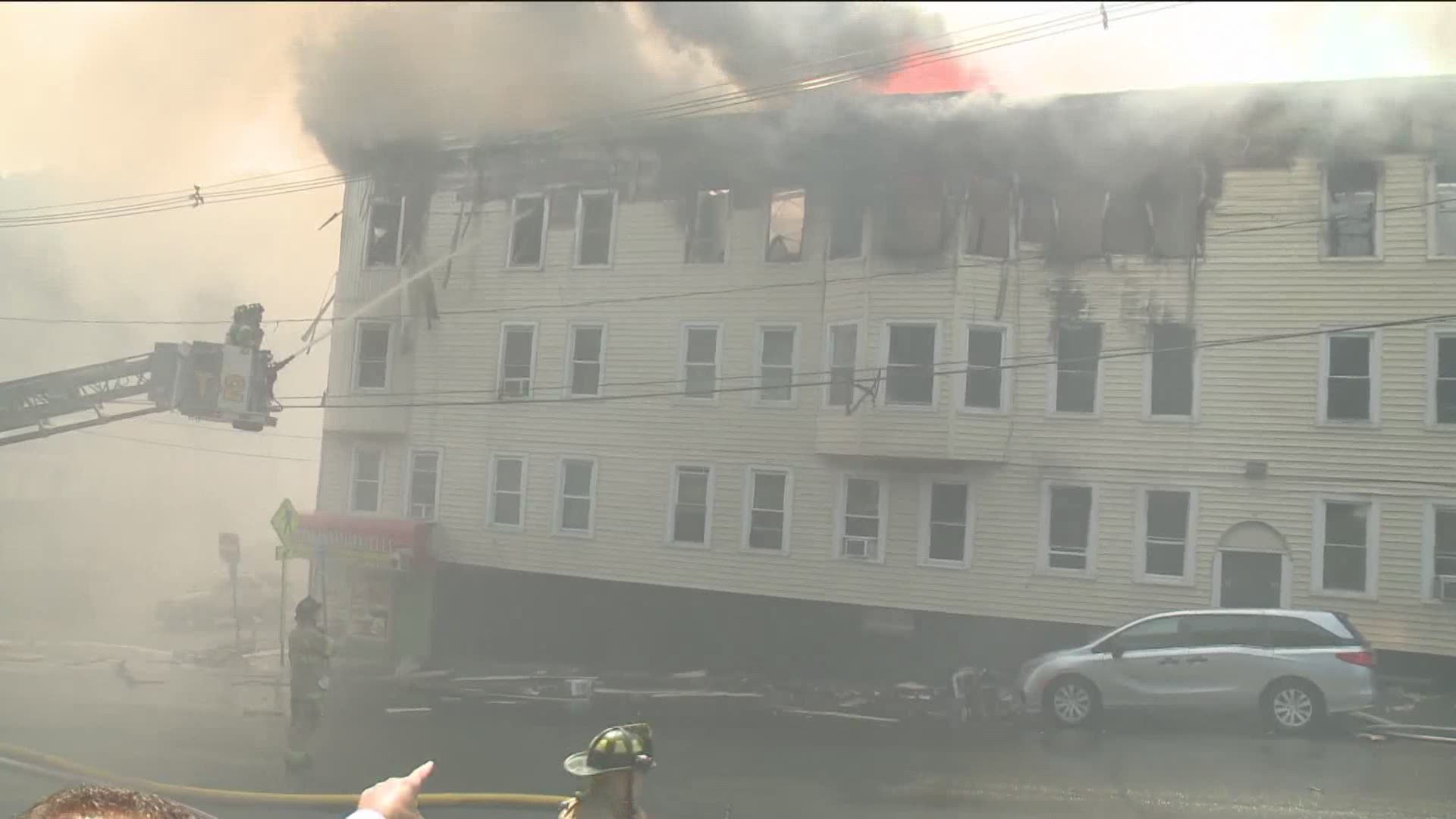