The Dow Jones Industrial Average sank nearly 1,200 points, one day after President Trump tried to reassure Americans that the crisis is under control. 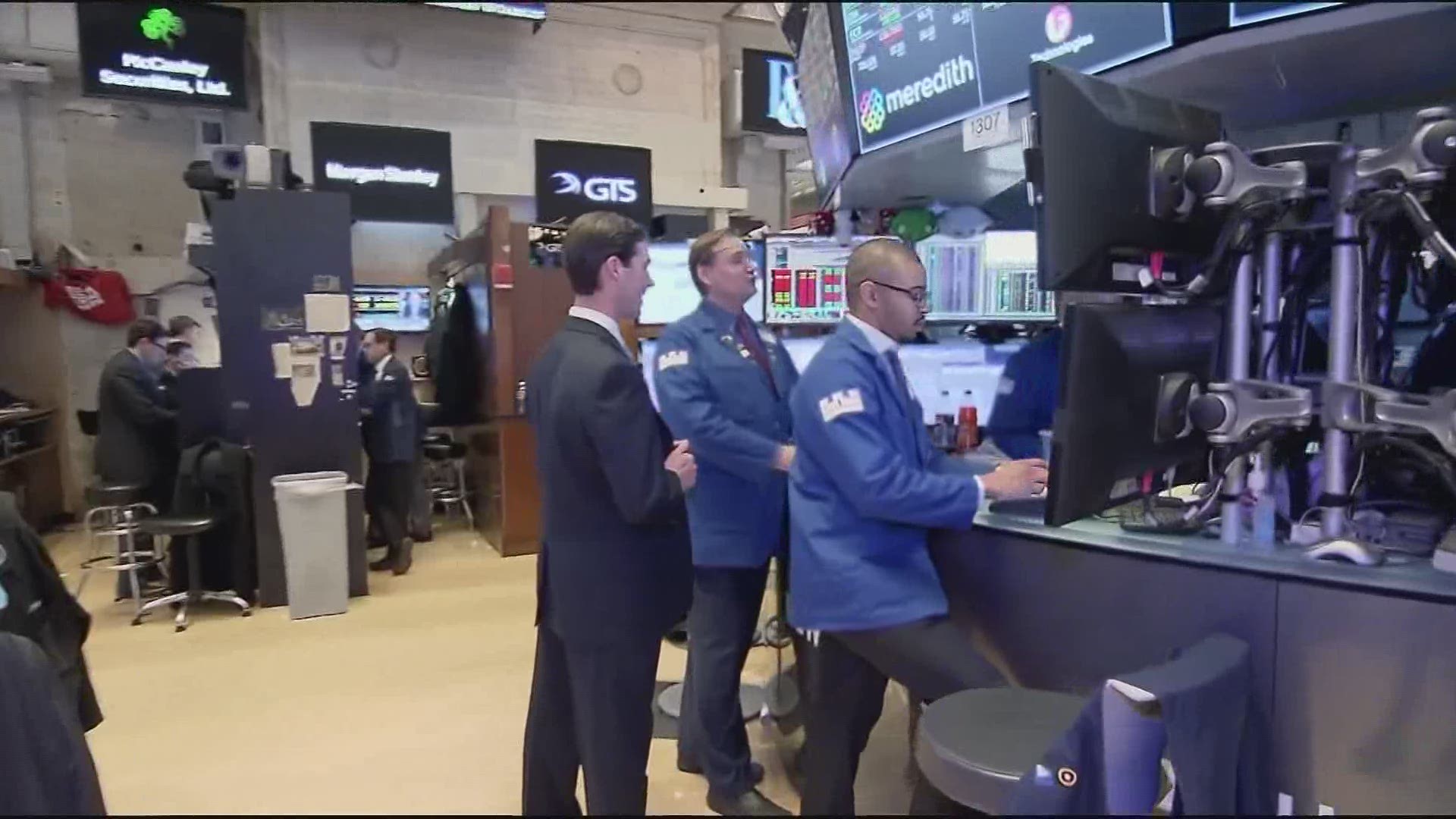 The selloff gave U.S. stocks their worst one-day drop since 2011.

The S&P 500 has now plunged 12% from the all-time high it set just a week ago.  That puts the index in what market watchers call a “correction.” The index is headed for its worst week since October 2008, during the global financial crisis.

However, Bond prices soared again as investors sought safe places to park money, sending the yield on the 10-year Treasury to another record low. More companies including Microsoft are warning their results will be hurt.

Investors are dumping stocks again as fears spread that the growing coronavirus outbreak will weigh down the global economy.

Stocks opened sharply lower Thursday morning on Wall Street, extending a weeklong rout and bringing the Dow Jones Industrial Average 10% below the record high it hit two weeks ago. They continued on a wild ride Thursday as investors struggle to gauge the impact of the outbreak on the world's economy.

The Dow Jones Industrial Average dropped 960 points in morning trading, erased much of the loss by midday before giving way to another round of selling in the afternoon. The bond market saw similar volatility, with the yield on the 10-year Treasury at one falling to another all-time low.

More companies including Microsoft are warning their results will be hurt. The furious selling of the past week has brought the S&P 500 10% below the record high it set just a week ago.

The spread of the new coronavirus is jamming up business as companies suspend production, meetings, events and business travel. Facebook is canceling its annual conference for developers, usually held in late April or early May in Northern California, where officials are trying to locate everyone who was in contact with the first known coronavirus case in the U.S. of unknown origin: a woman lives in Solano County.

JetBlue Airways is waiving extra fees for changing or canceling a ticket in hopes of reassuring customers who worry about getting hit later with a fee because of “evolving coronavirus concerns.”

Some major companies are telling their staff to avoid all business travel. Others, like brewer AB Inbev, are reporting that the hit to their revenue so far is in the hundreds of millions of dollars.

Markets were down sharply again, and AB Inbev, the world's biggest brewer, reported a significant drop in demand in China. More companies including Microsoft, along with Budweiser maker InBev, are warning their results will be hurt.

Facebook says the annual conference for developers that it's canceling is because of concerns over the virus outbreak. The F8 show is usually held in late April or early May in the San Francisco area. The company says it's planning alternatives for developers, including live streams, locally hosted events and videos. More than 5,000 people from around the world attended last year's F8.

Worries about economic fallout from the virus outbreak have fueled sell-offs that have wiped out the market's gains for the year.

Japan's Nikkei 225 index lost 2.1% on Thursday, while in Australia, the S&P ASX/200 dropped 0.8%. Hong Kong's Hang Seng lost 0.8%. In South Korea, where 334 new cases of the virus were reported, the Kospi dropped 1%. The Shanghai Composite index rose 0.2%, while shares fell in Taiwan and most of Southeast Asia. Thailand's benchmark rose 0.4% after tumbling 5.1% on Wednesday following reports of newly discovered virus cases.

Shares have fallen in Europe and Asia after President Donald Trump announced the U.S. was stepping up its efforts to combat the virus outbreak that began in China. Benchmarks dropped in Paris, London, Tokyo and most other markets. They rose in China, where officials' confidence has been growing now that there are more cases being reported outside the country than inside.

Chinese authorities are eager to shed the virus stigma and questions about its early handling of the epidemic, The Associated Press reports. President Xi Jinping said on Thursday that, “We have the confidence, the ability and the certainty to win this war against the epidemic.”

Trump announced on Wednesday that Vice President Mike Pence would be leading the U.S. coronavirus response. Trump also tried to assure Americans that the crisis is under control.

The Centers for Disease Control and Prevention says there are currently 60 cases in the U.S. That includes a new case in Northern California that does not appear to be linked to travel abroad or contact with another known infected person -- the first such U.S. case of its kind. The CDC has also urged Americans that they should be prepared for what steps they need to take should there be widespread outbreak in the U.S., including school closings and working from home.

Additionally, the president spent Wednesday on Twitter trying to place the blame for the market tumble on the media and Democrats, accusing them of ratcheting up the alarm. He said MSNBC and CNN were "doing everything possible" to make the coronavirus "look as bad as possible, including panicking markets, if possible."

During his press conference, Trump also appeared to tie the market's reaction to Tuesday night's Democratic debate and the possibility he might be replaced by one of the candidates. The Dow Jones suffered most of its losses this week -- 1,911 points -- before that debate happened.