The 39th president has slowed down in recent years, but continues to teach Sunday school and work on humanitarian projects. 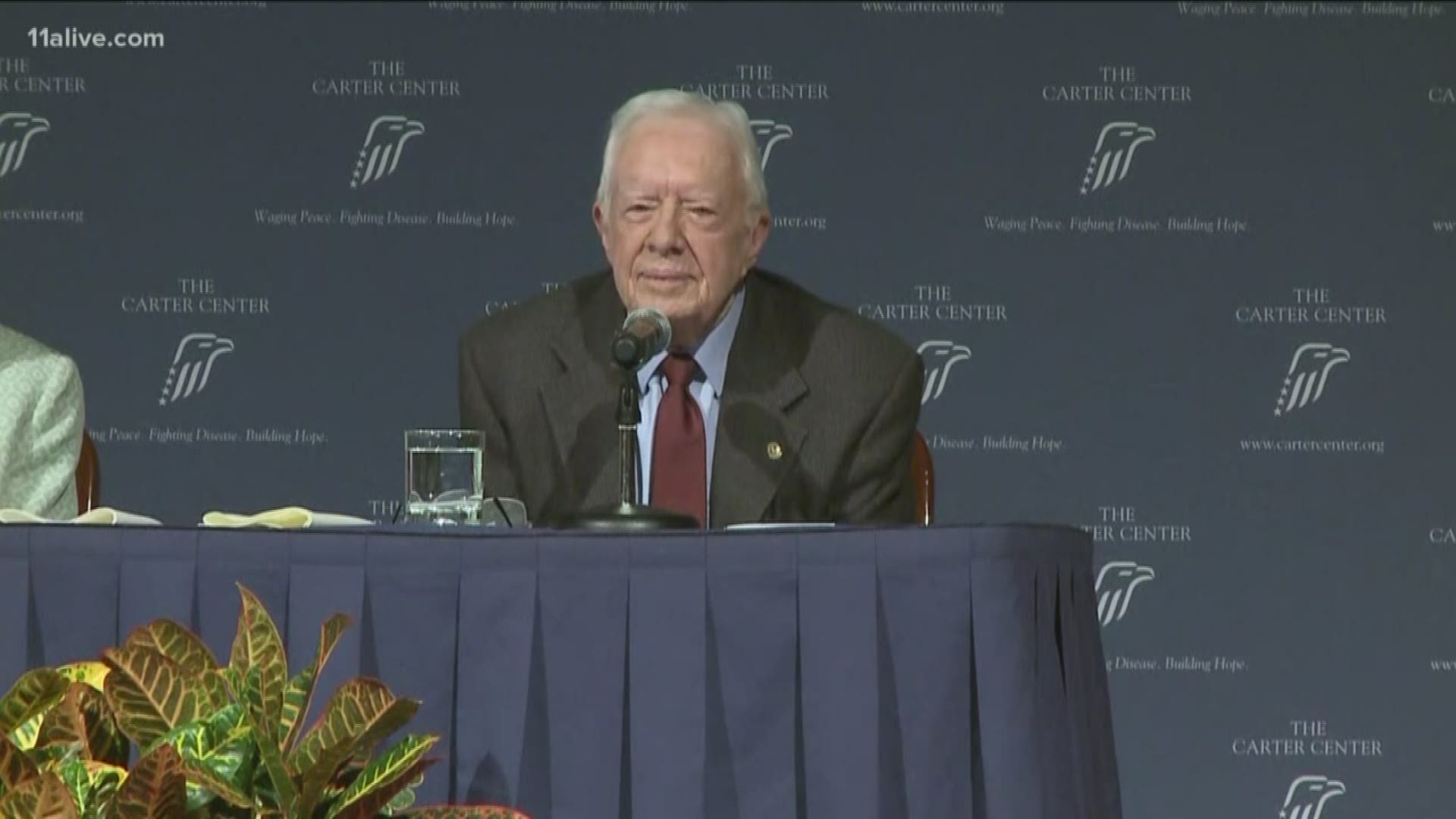 ATLANTA — Jimmy Carter is celebrating his 95th birthday, becoming the first U.S. president to reach that milestone as he continues his humanitarian work and occasionally wades back into politics and policy debates almost four decades after leaving office.

Carter, who served from 1977-1981 and still lives in tiny Plains, Georgia, planned no public celebrations on Tuesday.

The 39th president, born in 1924 and raised during the Great Depression, has slowed physically in recent years, acknowledging recently that he has trouble walking after hip replacement surgery in May. But he remains active with programs at the post-presidency center he and Rosalynn Carter opened in Atlanta in 1982. He still teaches Sunday School at Maranatha Baptist Church in Plains. The Carters plan to travel later this week to Nashville, Tennessee, where they will help build houses for Habitat for Humanity.

Carter survived a dire cancer diagnosis in 2015 and became the longest-lived U.S. president in history this spring, surpassing George H.W. Bush, who died in 2018. Rosalynn Carter, now 92, is among the longest-lived first ladies. The couple has been married 73 years.

In recent public appearances, the former president has sounded like a man still intent on securing his legacy, amplifying his criticisms of American military spending and war, blasting the proliferation of money in U.S. politics and urging action to combat the climate crisis. And he's expressed particular pride that the U.S. engaged in no foreign wars during his tenure.

"I just want to keep the whole world at peace," Carter said in September during his annual Carter Center report.

"We have been at war more than 226 years. We have been at peace for about 16 years," he said of the U.S. since the Declaration of Independence in 1776. He asserted that every U.S. military conflict from the Korean War onward has been a war of "choice."

"The United States is very deeply inclined to go to war," Carter said, partly as "a mechanism by which we can implant American policies ... in other countries." A Naval Academy graduate and World War II veteran, Carter said presidents feed the cycle, in part because "we make a hero" out of wartime commanders-in-chief.

Credit: AP
FILE - In this June 9, 2019 file photo, former President Jimmy Carter smiles as he returns to Maranatha Baptist Church to teach Sunday School, less than a month after falling and breaking his hip, in Plains Ga. The 94-year-old former U.S. president said Friday, June 28, that he believes Russia’s meddling “if fully investigated would show that Trump didn't actually win the election in 2016.” Carter said he believes Trump “lost the election” and became president “because the Russians interfered on his behalf." (Curtis Compton/Atlanta Journal-Constitution via AP, File)

The Carter Center, which has focused mainly on public health, election monitoring and conflict resolution, has "never voiced an opinion publicly" on individual wars, Carter noted.

"This is primarily my fault," the former president said, explaining that he wants the center to become a more forceful advocate on questions of war around the world, including "wars by the United States." He said the Carter Center could engage in "constructive criticism of the United States government ... without being partisan about it."

An outspoken Christian, Carter sometimes frames his views on war in terms of his faith, noting that Jesus is referred to in the Bible as the "prince of peace." But at the Carter Center in September and a day later in his town hall with Emory University freshmen, the former president emphasized economic consequences of war.

China, he noted, has "been at peace" since he normalized relations with Beijing in 1979. Since then, Carter said, the U.S. has spent trillions on military conflict, while China has invested similar amounts in high-speed rail, new college campuses and other infrastructure. He told Emory freshmen he's not "favorably" comparing China's human rights record, but rather emphasizing the costs of war.

RELATED: Jimmy Carter says he couldn't have managed presidency at 80

Carter hasn't backed anyone in the Democratic presidential primaries, even as some candidates call on the former president . But he says re-electing President Donald Trump would be "a disaster."

He disclosed that he voted for Bernie Sanders, a democratic socialist, over the establishment favorite Hillary Clinton in the 2016 Democratic primary. This time, Carter cautions Democrats not to go too far left, warning that an embrace of single-payer, government-run health insurance could cost the party votes among moderates and independents. That would seem to rule out Sanders and another progressive favorite, Elizabeth Warren.

But Carter said he would like to see a woman as president, and made a notable observation on age, saying he couldn't have managed "the duties I experienced when I was president" when he was 80 years old . That could be seen to nix not only Sanders, at 78, but the more moderate former Vice President Joe Biden, who is 76. Warren is 70.

Two longshot candidates who apparently fit Carter's stated priorities for the party are Mayor Pete Buttigieg of South Bend, Indiana, a 37-year-old who was born after Carter's presidency ended, and Minnesota Sen. Amy Klobuchar, a moderate who is close to Carter's vice president and fellow Minnesotan, Walter Mondale. Both have visited Carter since declaring their candidacies.

Carter has given no indication that he will endorse, making clear only that he'll be "voting Democratic" in the general election.

While he matter-of-factly declares his intentions to vote next fall, Carter also talks with the realism of a nonagenarian, born when the world population was quarter of what it is today and the life expectancy of American males was 58 years.

He noted he's often said he wanted to live long enough to announce the end of Guinea worm disease, a parasitic infection attributed to poor drinking water. There were 3.5 million cases in 21 countries in 1986, when the Carter Center began its eradication program. In 2018, there were 28 cases worldwide.

A year later, Carter expresses disappointment over an outbreak of the disease among dogs, with new human cases in Chad, Angola and Cameroon. Researchers from multiple universities, he said, are "trying to figure out what to do about it."

Meanwhile, the former president told a rapt Carter Center audience that they might have heard his final annual report, because he plans to start devoting more time to his family.

"This may be our last conversation with you," Carter said. "We may or may not have one next year."