Biden declares himself back in race after 2nd place Nevada finish

'We're alive and we're coming back and we're gonna win,' the former vice president said as early results in Nevada showed him in second place after Bernie Sanders. 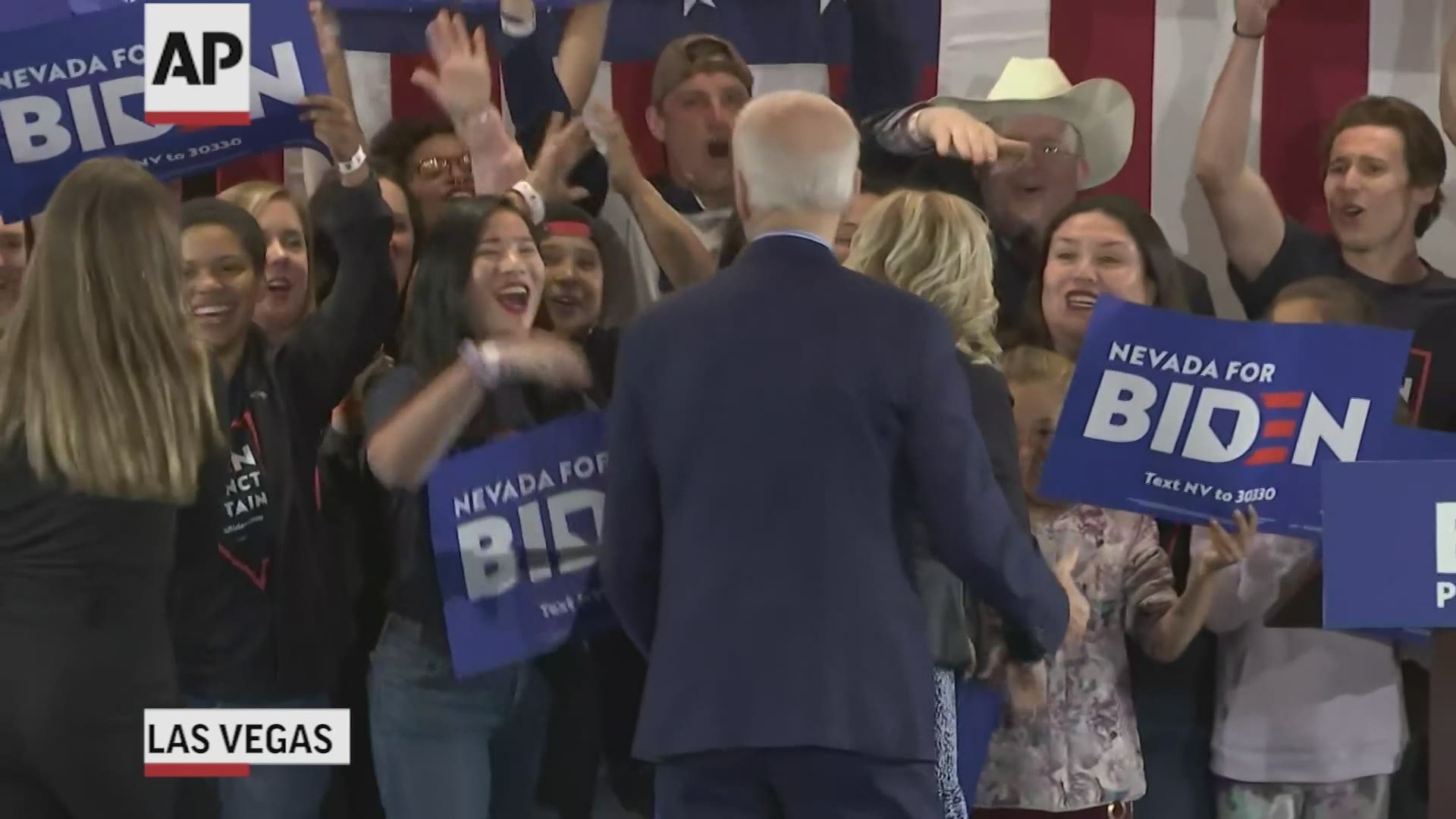 LAS VEGAS — Joe Biden is declaring himself back into the race for the presidency after early results in Nevada showed the former vice president in second place.

Biden told supporters Saturday that “we're alive and we're coming back and we're gonna win.” Biden thanked unions for their support, citing labor groups that have endorsed him including firefighters, ironworkers and electrical workers.

He took a shot at the race's frontrunner, self-declared democratic socialist Bernie Sanders, and former New York Mayor Mike Bloomberg, who isn't competing in the first four states but has spent hundreds of millions of dollars of his own fortune hoping to pick up delegates starting on Super Tuesday.

Biden said the Russians will continue to support President Donald Trump and Sanders, whose campaign acknowledged Friday that he was briefed last month by U.S. officials about Russian efforts to boost his candidacy.

"Let's give Trump exactly what he doesn’t want," Biden told his supporters. “Let's give him you and Joe Biden as the nominee.”

Amy Klobuchar is telling supporters her presidential campaign has “exceeded expectations” and she plans to carry on, even as she trailed far behind several rivals in Saturday’s Nevada caucuses.

The Minnesota senator returned to her home state Saturday following a morning event in Las Vegas. Speaking to volunteers Klobuchar said that "a lot of people didn’t even think I would still be standing at this point."

Klobuchar finished in fifth place in the kickoff Iowa caucuses before a strong debate performance helped lift her to third place in New Hampshire.

She will campaign Sunday in Fargo, North Dakota, before holding events in Arkansas and Oklahoma, both states that will vote in the March 3 “Super Tuesday” contests. On Monday she will be in South Carolina, which holds its primary Saturday and where she will participate in a Tuesday debate.

RELATED: Democrats focus on MN ahead of super Tuesday

Pete Buttigieg is delivering a blistering attack against rival Sanders, who he accuses of leading a divisive movement that has furthered “the toxic tone of our politics.”

The former South Bend, Indiana, mayor and Democratic presidential hopeful made the remarks while addressing supporters in Las Vegas, shortly after Sanders won the Nevada caucuses.

Sanders has performed strongly in early contests giving him an early lead. But Buttigieg said the Vermont senator has proven to be ideologically inflexible, fails to police aggressive supporters and has alienated moderate voters who don’t support the wholesale political “revolution” Sanders advocates for.

He urged voters to “take a sober look at the consequences” of making Sanders the party’s nominee. Buttigieg said Sanders has a “vision of capitalism as the root of all evil.” And he added that Sanders' political vision would “reorder the economy in ways most Democrats -- let alone most Americans -- don’t support.”

Buttigieg called for a broad Democratic coalition. But he said Sanders’ army of online supporters – often referred to as “Bernie Bros” – threaten, intimate and harass the very same people needed to beat Trump.