One man's mission to clean up the Potomac River on paddleboard

Since he started in May 2019, Joe Wright, or SUP Garbage Man, has collected 1360 cubic feet of trash from the Potomac River. 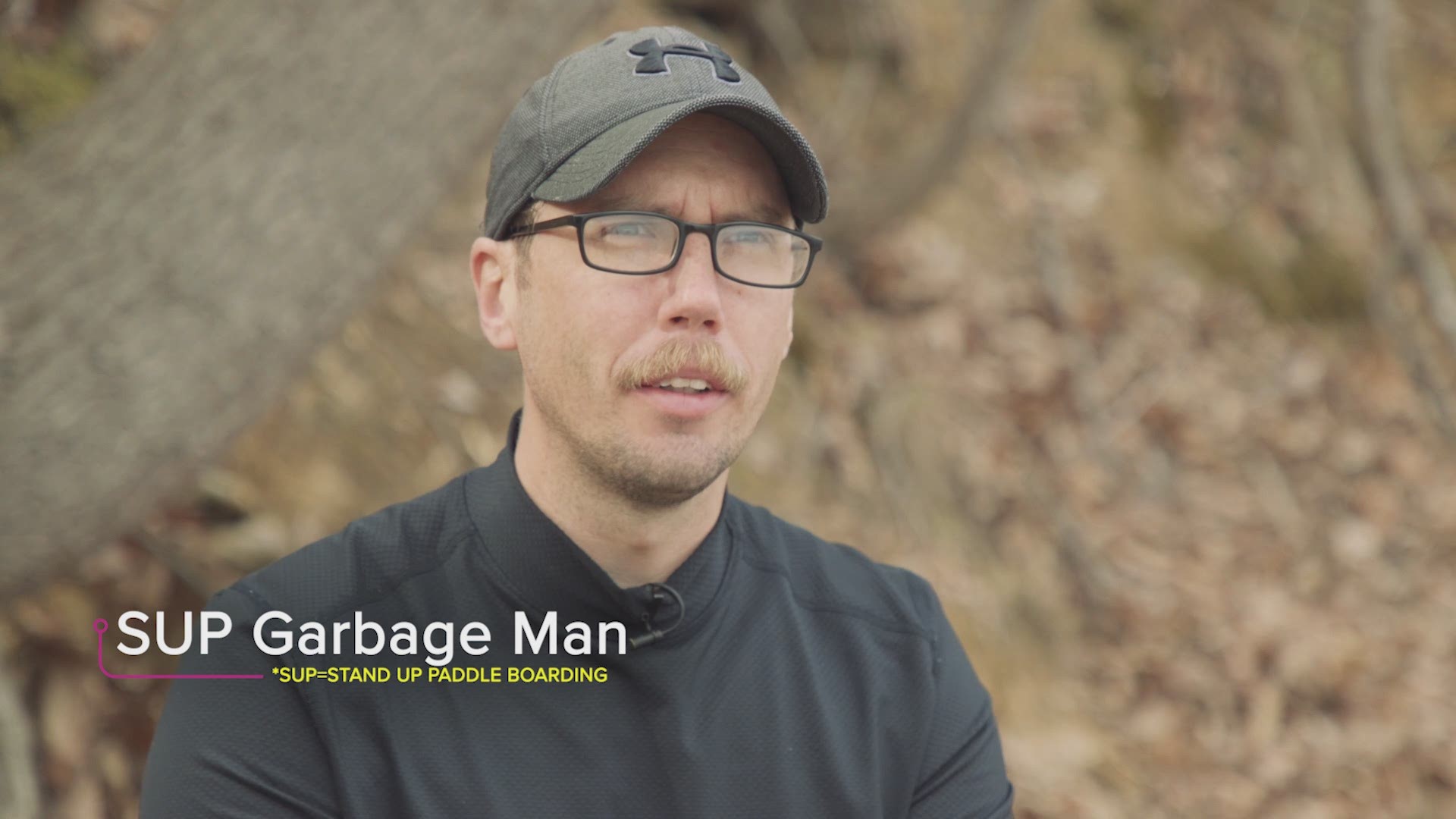 ARLINGTON, Virginia — Joe Wright was paddle boarding one morning in 2019 when he saw a to-go container floating in the water. It was hardly an unusual scene on the Potomac River, part of which flows through the nation's busy capital city.

But the go-to container struck a chord with Joe. The next day, he brought a milk crate onto his paddle board to store trash that he picked up. He quickly filled it up with other garbage.

"When you look for trash, you could find trash," Joe said.

So his journey began, with a new nickname -- SUP Garbage Man (SUP stands for stand up paddle board).

Since he started in May 2019, Joe has collected 1360 cubic feet of trash. To put that number in context, that would be more than enough to fill a standard dump truck.

RELATED: Great-grandmother in quarantine tears up at heartwarming sign

Having grown up in Florida and lived in California, Joe surfed a lot when he was young. But he didn't start paddle boarding until 2013. Over time, he realized how much he enjoyed being out on the water surrounded by nature. Joe has also been acutely aware of the trash problem and has spent time volunteering with community cleanups.

"It's given me something to like do something that I love while also helping and I've always done cleanups," Joe said. "so I just combined the two."

Credit: Francis Abbey
Joe a.k.a. SUP Garbage Man sits by a crate of trash that he picked up out of the Potomac River.

On a typical Saturday morning, Joe drove his blue Toyota Tacoma with a paddle board loaded on the top to a quiet spot near the shoreline of the Potomac River in Virginia. After checking the wind to make sure he can safely be on the water, he unloaded the crate and put his paddle board by the river. As the sunrise transformed the skyline into shades of pink, Joe started paddling.

Before long, Joe spotted piles of trash that were washed up to the shoreline and trapped by tree branches. With a trash grabber stick in hand, he picked up some rubber gloves, a chip bag, and a toy bicycle. He's no longer surprised by the odd items that wind up polluting the river.

"Just because I've seen so many crazy things, nothing is unexpected to me anymore," Joe said.

Among the garbage that Joe has pulled out of the waterways are fire extinguishers, BMX bikes, car seats, propane tanks and lots and lots of tennis balls.

"I found so many tennis balls that I feel like I can open my own tennis club," Joe said with a laugh.

RELATED: Former Marine helps other soldiers heal by 'walking off the war'

Within an hour, Joe's milk crate was filled with all kinds of trash, mostly plastic bottles. Then he paddled back to where he parked his car and started sorting.

He separates items into three groups: trash, recycling and large items. At one point, he was collecting so much trash that he couldn't fit it all in his curbside garbage bin. But when Joe's neighbors found out about the project, they offered their trash can as overflow. Now, he uses both bins to efficiently dispose of his findings.

He attributes his passion for trash-collecting to a game his mother devised for Joe and his sister when they were young. On family walks, his mother would task them with finding items that corresponded to letters of the alphabet. The game inadvertently drew Joe's attention to the amount of garbage littering the streets.

Credit: Francis Abbey
Joe's crate was filled with trash, including a few bottles, a basketball and a blue-tooth speaker.

Joe has not stopped his trash-picking endeavors during the pandemic. Since he works solo and typically goes out at sunrise, he is naturally social distanced while out on the water.

If anything, his work is becoming ever more important, as the amount of plastic waste is surging during the pandemic.

Though he's passionate about his work, Joe said he doesn't expect others to do the same. Instead, he suggests making a difference in small ways, like buying a reusable water filter instead of a 12-pack bottled water.

"Being responsible with the trash that we have and create will help reduce what gets out into the river," Joe said.

"If I got one person, somewhere in the world, to pick up a piece of trash because of what they saw me doing, just one, then I've done something positive for the world."

CDC director: 99.9% of COVID cases in US currently is delta variant