As the country reported a drop in new COVID-19 cases, it seems its leaders were aware of the potential epidemic beforehand. 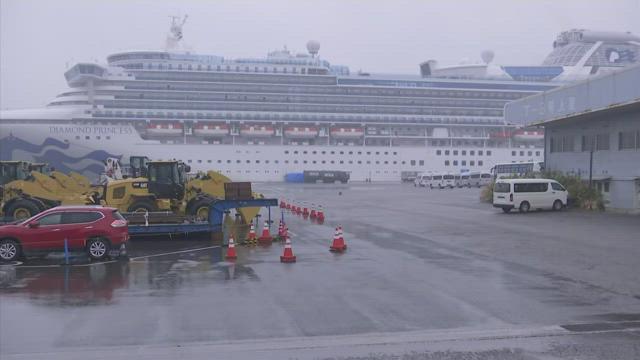 BEIJING, China — China reports a drop in new virus cases for the third straight day, as it became apparent that the country's leadership was aware of the potential gravity of the situation well before the alarm was sounded.

After Chinese President Xi Jinping played a muted public role in the early days of the epidemic, state media published a speech Xi delivered Feb. 3 in which he said he gave instructions on fighting the virus as early as Jan. 7.

The publication was an apparent attempt to demonstrate the Communist Party leadership acted decisively from the beginning. It also opens Xi up to criticism over why the public was not alerted sooner.

It was not until late January that officials said the virus can spread between humans and a public alarm began to rise.

The National Health Commission says there are 2,009 new cases in mainland China, bringing its total number of confirmed cases to 68,500 with 1,665 deaths.

France announced the first death of a virus patient outside Asia. It has become the first country outside the continent to report a death from the new virus that originated in China.

Health Minister Agnes Buzyn said on Saturday that the patient was an 80-year-old Chinese tourist who tested positive for the virus in late January. All the previous deaths from COVID-19 outside mainland China were in Asia.

The head of the infectious disease unit at the Paris hospital where the tourist died says two French hospitals initially turned the man away and didn't test him for the virus because he “didn’t fulfill the definition” of someone considered at risk of infection.

Credit: AP
Two buses leave a port where the quarantined Diamond Princess cruise ship is docked Saturday, Feb. 15, 2020, in Yokohama, near Tokyo. A viral outbreak that began in China has infected more than 67,000 people globally. The World Health Organization has named the illness COVID-19, referring to its origin late last year and the coronavirus that causes it. (AP Photo/Jae C. Hong)

The U.S. Embassy in Japan says Americans aboard a quarantined ship will be flown back home on a chartered flight Sunday.

About 380 Americans are aboard the Diamond Princess cruise ship, which has docked at Yokohama, a port city southwest of Tokyo.

So far, 285 people from the ship have tested positive for a new virus.

Japan's Health Ministry allowed 11 passengers to disembark Friday, saying that those above 80 years of age, with underlying medical conditions as well as those staying in windowless cabins during the 14-day quarantine, can stay at a designated facility onshore.

"Due to the dynamic nature of the outbreak, the U.S. government recommends that U.S. citizens disembark and return to the United States," the Centers for Disease Control said in a statement on Saturday.

As of Saturday, the outbreak had infected more than 67,000 people globally.

The head of the World Health Organization praised China's efforts to contain the disease. Dr. Tedros Adhanom Ghebreyesus said China has "bought the world time" and that other nations must make the most of it.

The embassy said the aircraft will arrive in Japan late Sunday, and people will be flown to Travis Air Force Base in California, with some passengers continuing to Lackland Air Force Base in Texas. After arriving in the U.S., all will need to go through another two weeks of quarantine.

The CDC said the passengers returning from Japan will be housed separately from individuals already in quarantine from previous Wuhan repatriation flights.

"This is an evolving situation and every day we learn more about this virus," the CDC added. "We continue to believe the risk of exposure to novel coronavirus 2019 to the general public is currently low. The U.S. Government is taking these measures to fully assess and care for these repatriated Americans to protect them, their loved ones, and their communities. We are deeply grateful to the government of Japan for their extraordinary care and hospitality and their assistance facilitating the care and return of our citizens."

The World Health Organization has named the illness COVID-19, referring to its origin late last year and the coronavirus that causes it.

The latest figures reported by each government's health authority as of Saturday night in Beijing:

RELATED: Amid coronavirus fears, a second wave of flu hits US kids

RELATED: US confirms 15th coronavirus case, this one in a Texas evacuee