Our VERIFY researchers fact-checked what President Trump and Joe Biden said during the first presidential debate. 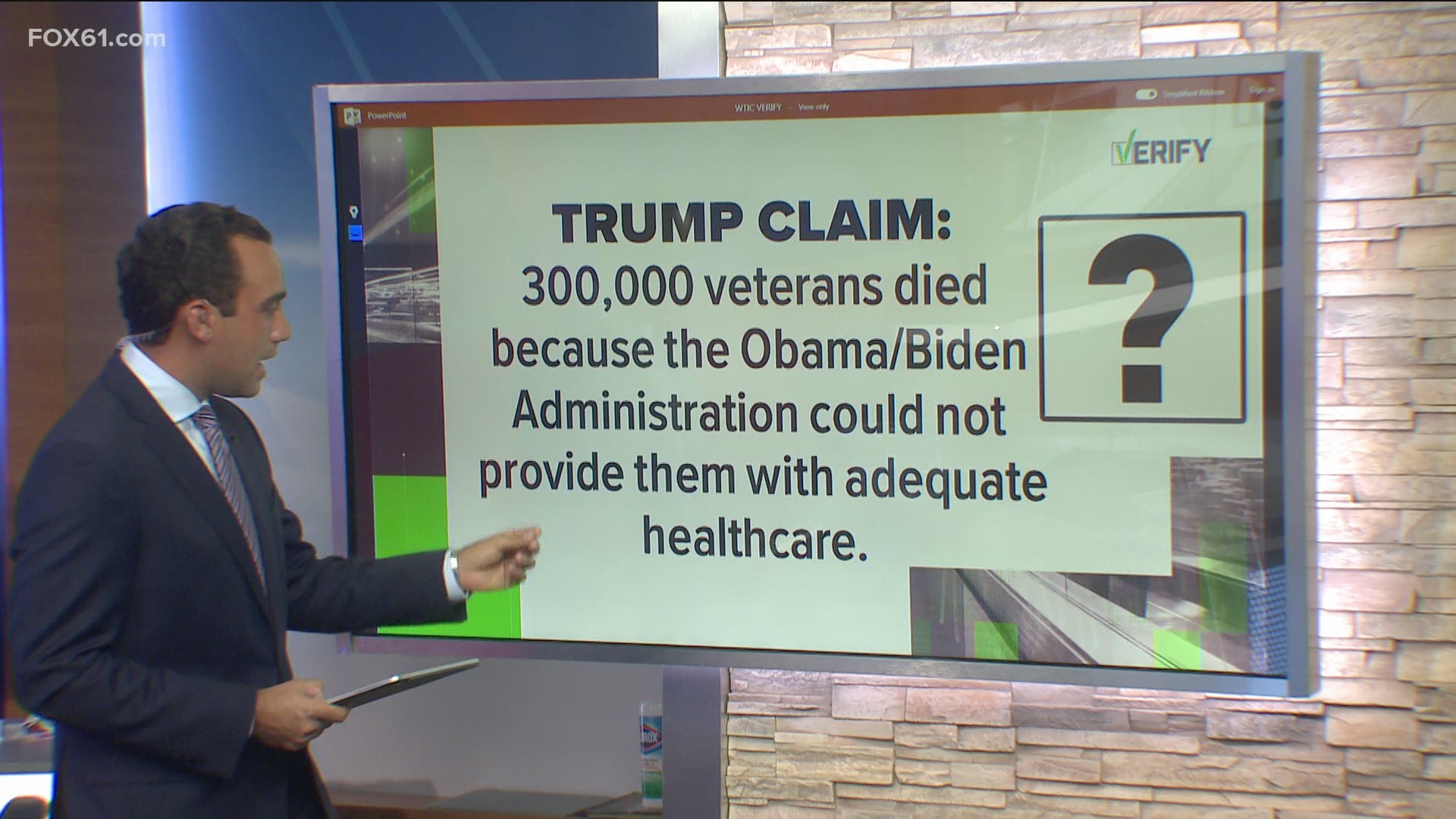 President Donald Trump and Democratic presidential nominee Joe Biden faced off in Cleveland on Tuesday for the first presidential debate.

Our VERIFY researchers worked to fact-check the claims and statements both nominees made. .

Our VERIFY researchers found a Fox & Friends interview from August 27, 2020, in which Conway spoke about violence in Kenosha, Wisc. She mentioned a story about a “small businesswoman” who got ready to re-open her business amid COVID-19 restrictions being lifted only to have to do it all over again after her business was allegedly “vandalized and looted.”

Conway then talked about a quote from a Wisconsin restaurateur who allegedly said “Are you protesters trying to get Donald Trump re-elected?”

Conway then said, "He knows, full stop, and I guess Mayor Pete (Buttigieg) knows full stop that the more chaos and anarchy and vandalism and violence reigns, the better it is for the very clear choice on who's best on public safety and law and order.”

During the debate Conway, tweeted to deny that she ever said this.

“Thanks for debate shout-out, creepy/sleepy/weepy JOE, but you lied. And don't sniff my hair, either," Conway tweeted.

Portland, Ore., is a city and it does not have a sheriff. But Portland is located in Multnomah County and its sheriff is Mike Reese. He made it clear he doesn't support Trump.

"In tonight’s presidential debate the President said the 'Portland Sheriff' supports him.  As the Multnomah County Sheriff I have never supported Donald Trump and will never support him," Reese tweeted.

yeah, but what about the portland sheriff? 🙄🙄🙄

It's not clear if Trump was talking about a different sheriff in relation to another Portland, but Portland, Ore., has dealt with months of daily protests and Trump has talked about it multiple times.

CLAIM: Trump questioned the integrity of mail-in ballots by remarking that some states will let people submit their ballots on November 10, a week after Election Day.

This is true, but that doesn't mean they can mail it a week late.

The National Conference of State Legislatures lists at least 19 states that accept mail-in ballots after Election Day if they have been postmarked before Election Day or in some states on Election Day. The exact deadlines vary from state to state and some states have recently changed their rules to adapt to the COVID-19 pandemic, so it’s a good idea to verify election deadlines on your state’s election website.

The United States Postal Service says, “A postmark indicates the location and date the Postal Service accepted custody of a mailpiece, and it cancels affixed postage.” That means that if you want your ballot to be counted, the USPS has to have possession of the ballot by Election Day at the latest.

This is false but needs context.

The President's 2020 budget proposed eliminating the $7,500 tax credit for purchasing an electric vehicle. But the President's proposed budget did not pass through Congress.

This claim is false.

The quote he’s referring to was actually said by Hillary Clinton and came up during the 2016 campaign. Clinton used the term in a 1996 speech at Keene State College in New Hampshire in support of the 1994 Crime Bill signed into law by her husband, President Bill Clinton.

That speech made an appearance during the 2016 campaign. Donald Trump made mention of it in an August tweet that year and Hillary Clinton issued a statement to the Washington Post in February apologizing for using it.

While Biden has received criticism for his role in the passage of the 1994 Crime Bill, and did warn of "predators" in a floor speech in support of that bill,  he did not refer to African-Americans as “superpredators.” Accusing him of doing so is false.

Centers for Disease Control and Prevention

CLAIM: President Donald Trump claimed that 300,000 veterans died because the Obama/Biden Administration could not provide them with adequate healthcare.

Trump is citing a real report, but the real story is a bit more complicated than Trump makes it sound. A report from the Department of Veteran Affairs’ inspector general in 2015 said, “As of September 2014, more than 307,000 pending [enrollment status] records, or about 35 percent of all pending records, were for individuals reported as deceased by the Social Security Administration.” That’s referring to their enrollment for VA healthcare.

The immediate sentences after that one said, “However, due to data limitations, we could not determine specifically how many pending [enrollment status] records represent veterans who applied for health care benefits. These conditions occurred because the enrollment program did not effectively define, collect, and manage enrollment data. In addition, VHA lacked adequate procedures to identify date of death information and implement necessary updates to the individual’s status.”

That means the exact numbers of veterans who were actually waiting to receive healthcare is unknown and that when exactly they died is unclear for some veterans.

CLAIM: Joe Biden said “[President Trump is] in the Supreme Court now trying to get rid of the Affordable Care Act, which will strip 20 million people from having health insurance now.”

This claim is true. Both the The Urban Institute and the Kaiser Family Foundation estimate that the Affordable Care Act currently covers 20 million people who would otherwise be uninsured. The Urban Institute estimates those 20 million people would immediately be uninsured if the ACA were repealed. Both reports say that the passing of a separate insurance plan could offset those numbers, but as of the writing of this article, no replacement bill for the ACA had been passed.

That is mostly true. According to a report from the Economic Policy Institute, 12 million Americans may have lost health insurance since February. That is based on the fact that most U.S. workers rely on an employer for insurance. When the COVID-19 crisis hit, millions of people lost their jobs. But the Economic Policy Institute has not calculated yet how many of those laid off workers were able to get on public assistance. So while millions lost employer provided insurance, some may have been able to find coverage from another source. Final numbers on how many people lost health insurance completely will not be available until next year.

CLAIM: President Trump said he was endorsed by 250 military leaders.

This is mostly true.

In September, 235 retired military leaders wrote an open letter endorsing President Trump. They wrote "As retired military officers we believe that Donald J. Trump has been tested as few other presidents have and is the proven leader to confront these dangers."

They also criticized former Vice-President Biden and the Democratic Party.

In late September, nearly 500 retired generals, admirals and national security officials endorsed Joe Biden for president, saying he had the character and judgment to serve as commander-in-chief instead of Trump, who has failed "to meet challenges large or small."

RELATED: Why the presidential election could take a month or more to decide