Though the fire caused extensive destruction to the vessel, the damage apparently is not irreparable, according to the Navy. 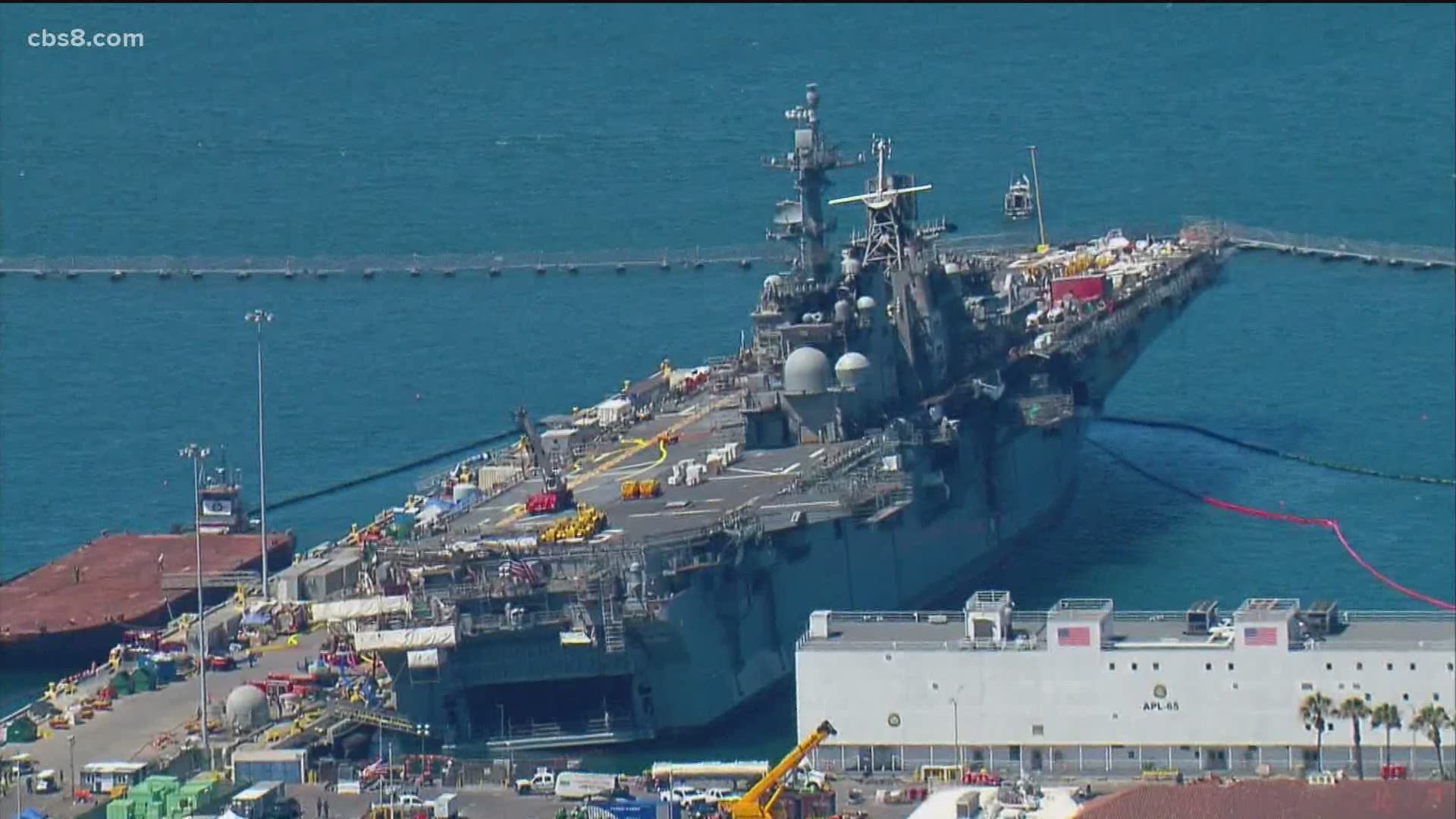 SAN DIEGO — Sailors and firefighters from nearby communities and bases extinguished the fire on the U.S.S. Bonhomme Richard Thursday after nearly five days. The ship began listing Wednesday night, but Navy officials said the amphibious assault ship is stable and could sail again.

“The ship can be repaired. Whether or not it will be repaired will be determined,” said Rear Adm. Philip Sobeck Commander of Expeditionary Strike Group Three.

Much of the damage occurred to the forward portion of the main deck. The engine and fuel areas escaped severe damage, which lends to the potential the ship could return to service.

Approximately 85 sailors who were living on the ship while it underwent maintenance at Naval Base San Diego are displaced. The Navy is temporarily housing them at Naval Base San Diego and Naval Base Point Loma. Many were among the first to respond to the fire Sunday. All sailors are trained in firefighting. Navy leadership spoke of one sailor who was treated at an area hospital for minor injuries suffered when an explosion occurred and returned to assist the effort when a second explosion occurred. The sailor again suffered minor injuries. He was prevented from returning again.

“Over the last four days I’ve witnessed your sons and daughters rushing to the flames, putting the flames out and securing their ship,” said Sobeck.

Investigators have not determined what sparked the 1200-degree fire that sent heavy plumes of smoke into the air. The San Diego County Air Pollution District issued a violation to the Navy for sending pollutants into the air.

The Port of San Diego, which operates the marine terminals outside of the base, offered hotel vouchers for residents affected by the smoke and pollution. On Wednesday, 281 households accepted the offer. An additional 119 households participated Thursday. Local leaders said the communities around the base have a higher rate of asthma and other conditions that can be affected by smoke and pollution.

Navy officials said investigators will also look into how future fires can be prevented. The U.S.S. Bonhomme Richard was the seventh warship to catch fire while undergoing maintenance in the past 10 years.

“Over the last 10 years you’re going to have areas where errors exist,” said Sobeck. “We’ve addressed each of those errors each one of those times and we’ve learned those lessons -- both from human error or equipment failure.”

Upon the news that the fire was out aboard the ship, Sobeck released the following statement:

"After four days of firefighting, all known fires have been extinguished aboard USS Bonhomme Richard (LHD 6).

Our fire teams are investigating every space to verify the absence of fire. Until every space is checked and there are no active fires we will not be able to commence any official investigations.

We did not know the origin of the fire. We do not know the extent of the damage. It is too early to make any predictions or promises of what the future of the ship will be.

We cannot make any conclusions, until the investigation is complete.

What we do know is that brave Sailors from commands all across San Diego worked tirelessly alongside Federal Firefighters to get this fire extinguished and I want to thank them for their efforts. This was a Navy team effort. We had support from the air and sea. Three helicopter squadrons conducted more than 1,500 water bucket drops, fighting the fire and cooling the super structure and flight deck enabling fire crews to get onboard to fight the fire. Tugs also provided firefighting support from the waterline, cooling the ship’s hull.

We had 63 personnel, 40 U.S. Navy Sailors and 23 civilians, treated for minor injuries including heat exhaustion and smoke inhalation. We have no personnel hospitalized.

The Navy continues to work together with regulators, county and state in protecting our environment and preparing to address the community’s concerns as we move forward to the next phase.

I’d like to thank our partners from state and county, the U.S. Coast Guard, and all agencies for continued support."

During a mid-afternoon briefing at the naval base south of downtown San Diego, Sobeck described the 22-year-old ship as ravaged -- listing, its melted aluminum superstructure bent over at a 45-degree angle -- but not dead in the water.

"The survivability of the ship is there -- I mean, it's survivable," the admiral told reporters. "It's proved it's survivable. It's in stable condition all the way through."

Though all the flames aboard the ship were believed to be out as of 2 p.m., firefighters continued their efforts to get its superheated interior back to safe conditions.

"So we're going space by space as I speak, to every compartment, checking for hot spots and then ... cooling them, either by ventilation or by water, and just kind of marching through every single space, every single deck to make sure that, again, we can then say officially the fire's out," Sobeck said.

A total of 40 sailors and 23 civilian firefighters suffered various minor injuries, mostly heat exhaustion and smoke inhalation, while taking part in the out-out battle to defeat the blaze, according to Navy officials.

The fire erupted shortly before 9 a.m. Sunday in a part of the vessel where cardboard and tri-wall boxes are kept, and soon was sending thick columns of acrid smoke above the bay and across much of the city. There were 160 sailors and officers aboard the ship when the fire broke out, Navy spokesman Brian O'Rourke said.

Because the ship was undergoing maintenance work when the fire erupted, its built-in flame-suppression system was inoperative, according to base officials.

After about 90 minutes, authorities decided to remove all firefighters from the vessel for safety reasons and go after the blaze by remote means, including helicopters and fire boats surrounding it on the bay.

About two hours after the fire began, a blast of unknown origin shook the vessel and "threw several firefighters off their feet," the San Diego Fire-Rescue Department reported.

The inferno eventually sent below-deck temperatures as high as 1,200 degrees and left the ship listing due to the amount of water it had taken on from the firefighting efforts, Navy officials said.

About four hours after the ship began burning, the Navy moved the USS Fitzgerald and USS Russell to berths farther away from the fire, according to Mike Raney, deputy public affairs officer with the Naval Surface Force.

As military and civilian crews made progress in quelling the inferno, Navy officials were able to determine that the ship had escaped complete destruction.

"First, we have investigated the four main engineering spaces (of the ship) and found no major damage," Sobeck told news crews Tuesday. "There is no threat to the fuel tanks, which (are) well below any active fires or heat sources. The ship is stable, and (its) structure is safe."

Late Wednesday night, authorities again evacuated all personnel from the ship "out of an abundance of caution" because it had begun to shift to one side, Navy officials said. By 6 this morning, the vessel had stabilized, and firefighters reboarded to continue attacking the blaze.

Over the course of the all-out, multi-agency firefighting operation, three helicopter squadrons conducted more than 1,500 water-bucket drops, helping cool its superstructure and flight deck, while tugboats blasted the smoking warship with water cannons.

Among the precautions in the area of the blaze instituted by the U.S. Coast Guard were a one-nautical-mile safety zone on the waters surrounding the ship and up to 3,000 feet in the air above it. Users of neighboring marinas were being advised to "utilize protective safety measures" as well, according to the agency.

USCG personnel also were assessing "environmental sensitivities and has contracted an oil-spill response organization to preemptively deploy protective boom to guard against any potential environmental concerns," according to a Coast Guard statement.

The Navy, for its part, will "work together with regulators, (and the) county and state in protecting our environment and preparing to address the community's concerns as we move forward to the next phase," Sobeck said.

Officials in National City, just south of the site of the fire, asked residents to remain in their homes as much as possible to avoid health hazards from the smoke billowing off the burning vessel. Likewise, the San Diego County Air Pollution Control District Office noted that if residents can smell acrid smoke, they should limit physical activity and stay indoors if possible.

This morning, San Diego City Council President Georgette Gomez announced that some residents in the 92102, 92113 and 91950 ZIP codes who have been bothered by pollution from the fire could get one-night hotel vouchers, though availability was limited and prioritized to people with relevant health problems. Interested parties were asked to call the city's 211 community- services telephone line.

The Bonhomme Richard is the third warship in U.S. naval history to bear the name, which means "Good Man Richard" in French and honors Benjamin Franklin's "Poor Richard's Almanac."

The vessel has been homeported at Naval Base San Diego since the spring of 2018, when it returned from a six-year port switch to Sasebo, Japan, while becoming the command ship for Navy Expeditionary Strike Group Seven.

PHOTOS: Fire crews responded to a fire and explosion onboard a Navy ship at Naval Base San Diego on Sunday, July 12, 2020

RELATED: Crews make progress as a fire aboard USS Bonhomme Richard burns for a 4th day

RELATED: 21 injured in fire aboard ship at Naval Base San Diego