It was announced on September 18, that the oldest Supreme Court Justice died at 87-years-old. 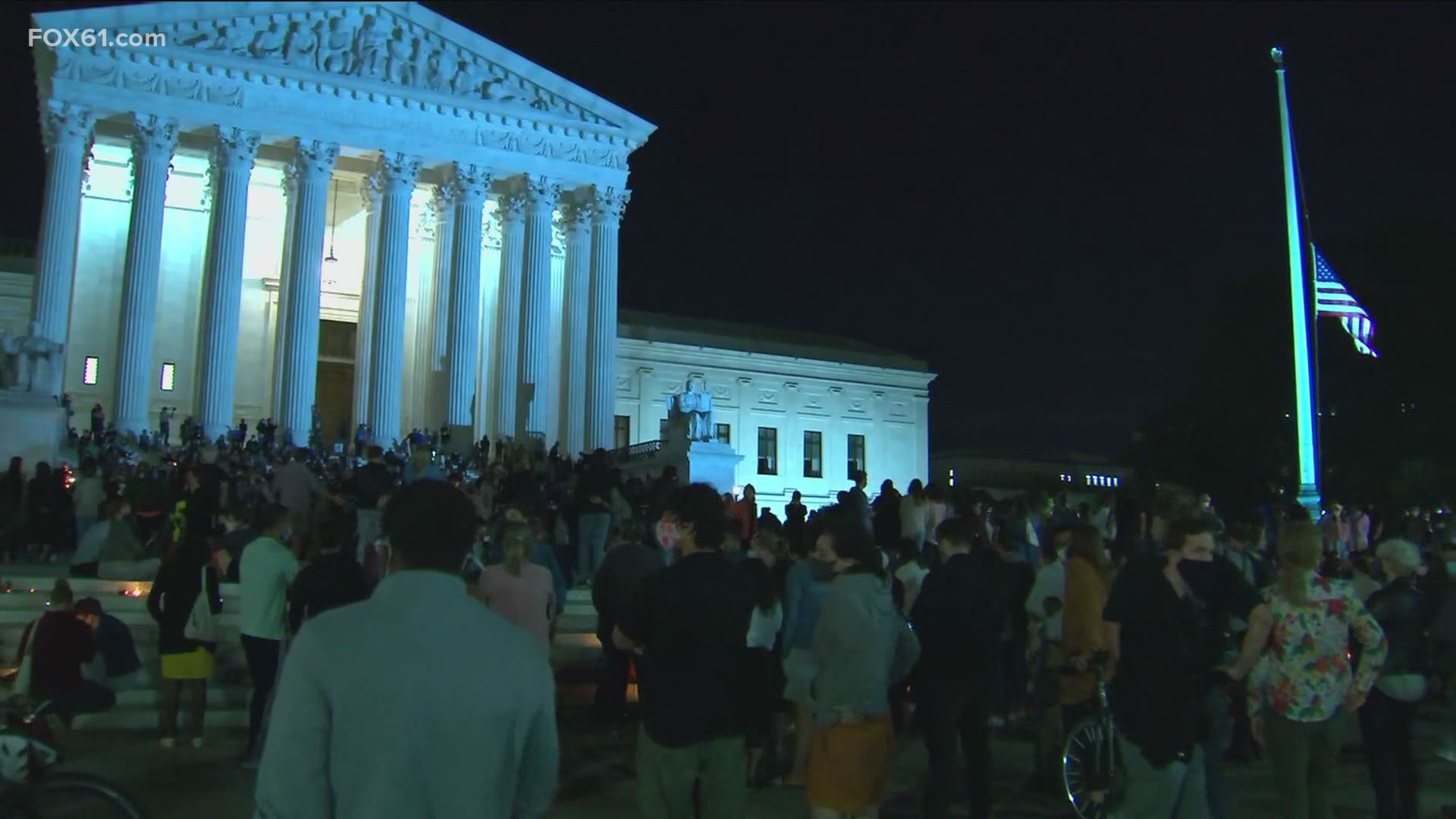 CONNECTICUT, USA — The Supreme Court announced on Friday night that the oldest Justice, Ruth Bader Ginsburg, had died at 87.

Ginsburg was appointed to the Supreme Court in 1993 by President Bill Clinton.

Elected officials from Connecticut paid their respects to Justice Ginsburg. Read their comments below.

“Tonight, the nation mourns the unimaginable loss of Justice Ruth Bader Ginsburg – a fierce and fiery champion for fairness and equality for all,” Governor Lamont said. “Shattering the glass ceiling in the legal world, Justice Ginsburg overcame adversity both in and out of the courtroom – battling gender discrimination at a time when women were rarely serving as lawyers. She also fought cancer with rigor, rarely missing any days in court. A giant inspiration and pioneer for women globally, Justice Ginsburg should not just be remembered for what she stood for but what she stood against. Our nation is greater for her tenacity, dissension, and adversity against injustice. As Justice Ginsburg put it best, ‘there will be enough women on the court when there are nine," --Governor Ned Lamont

“Justice Ruth Bader Ginsburg was a crusader, a fierce fighter for women’s rights, and a firm believer in justice for all. As the second woman to serve on the U.S. Supreme Court, Justice Ginsburg was a jurist of extraordinary talent. She approached every case — no matter the complexity — with compassion, intelligence, and wisdom. And in every aspect of her life, she exemplified grace, dignity, and tenacity. She tirelessly advocated for women’s reproductive freedoms and fought against discrimination in all its forms. She was a pioneer from the beginning and a true role model until the very end. I had the honor of knowing Justice Ginsburg since I was a child. My mother, Shirley Raissi Bysiewicz, and Justice Ginsburg were both law professors and colleagues at a time when very few women worked in the legal profession. She inspired many women, including me, to enter the legal profession. She showed the entire world that with perseverance and tenacity there is no obstacle you can’t overcome. She fought for all of us because she believed in the promise of our nation. Let us honor her legacy by continuing her fight for freedom, equality, and civil rights. May her memory be a blessing,” -- Lt. Governor Susan Bysiewicz.

“Ruth Bader Ginsburg was a giant. The world is a different place because of her. More than the laws she forged are the lives she touched. She was soft-spoken and slight in stature, but packed a mighty punch. She will always be a uniquely American icon – breaking barriers with courage and conviction, and letting nothing stop her from the classroom to the courtroom. As to the appointment of Justice Ginsburg’s successor, I couldn’t improve on what Mitch McConnell said after Justice Scalia’s death: The American people must have a voice in the selection of their next Supreme Court Justice. Therefore, this vacancy should not be filled until we have a new president. This close to the election, there is no way that the United States Senate can or should act before the voters decide,”--Senator Richard Blumenthal

"Today, the world lost a force of nature, a firebrand. I am devasted by the passing of Justice Ruth Bader Ginsburg. Our country will never be the same. Our world has lost a giant. Justice Ginsburg changed what it meant to be a woman in America. Long before she donned judicial robes, she knew women deserved a seat at every table and fought for equality with the weight of the world on her shoulders. In this dark time, I reflect on what our world would have looked like had Ruth Bader Ginsburg backed down from a fight. I wonder what women’s health care would look like and which freedoms would be missing. I wonder what universities would be accepting women and whether I would find a door with my name on it in the halls of Congress. Let us take this moment now to honor the brilliant, formidable woman that gave her entire life to the fight for equality. The road ahead seems dark, clouded by the unknown, but may we move forward with the tenacious commitment to justice exemplified by the life and legacy of the Notorious RBG. Justice Ruth Bader Ginsburg, you will be sorely missed," -- Representative Rosa DeLauro

"I was sad to hear of the passing of Justice Ginsburg. She was a legal pioneer, true role model for women of all ages, and a great American. She will be sorely missed." - State Rep. Themis Klarides (House Minority Leader)

I was sad to hear of the passing of Justice Ginsburg. She was a legal pioneer, true role model for women of all ages, and a great American. She will be sorely missed.

“I am saddened by the death of Supreme Court Justice Ruth Bader Ginsburg. She lived a uniquely-American life, as a champion for women, a teacher, and a resolute justice who flourished in the face of adversity. I respected her ambition, dedication, and intellect. She forced everyone to see beyond stereotypes and live out their full potential. This is a profound loss for the nation, as we say goodbye to a leader and defender of the Constitution. Justice Ginsburg’s death is a heartbreaking loss for our country. My thoughts and prayers are with her entire family. On this first night of Rosh Hashanah, we celebrate her life and mourn her death.” -- Representative Jahana Hayes

"Ruth Bader Ginsburg’s life was about shattering barriers for women, and all Americans who experience discrimination,” said Congressman Courtney. “She had an exquisite legal mind, and clarity of thought and word that she used powerfully to change this country for the better," --Representative Joe Courtney

Ruth Bader Ginsburg changed her nation for the better. Fairness and justice, especially for those with the least access to power, were her north stars. She was a pioneer for women in the law, and a cultural icon on top of it all. May she rest in peace.

“The nation is in mourning tonight as we learn of the loss of Supreme Court Justice Ruth Bader Ginsburg. Justice Ginsburg paved the way for millions of women and Americans who have faced discrimination and inequality. She never stopped fighting for equal rights for all. She will be remembered for her unparalleled courage, determination, and legal mind. She changed our nation for the better," --Representative John Larson

“Justice Ginsburg was an incarnation of those things which truly make America great. Justice tempered with compassion. Tireless work for the protection of liberty and the advancement of opportunity. Perseverance against the odds. We best honor her legacy by rededicating ourselves to these precious things. May her memory be a blessing," --Representative Jim Himes 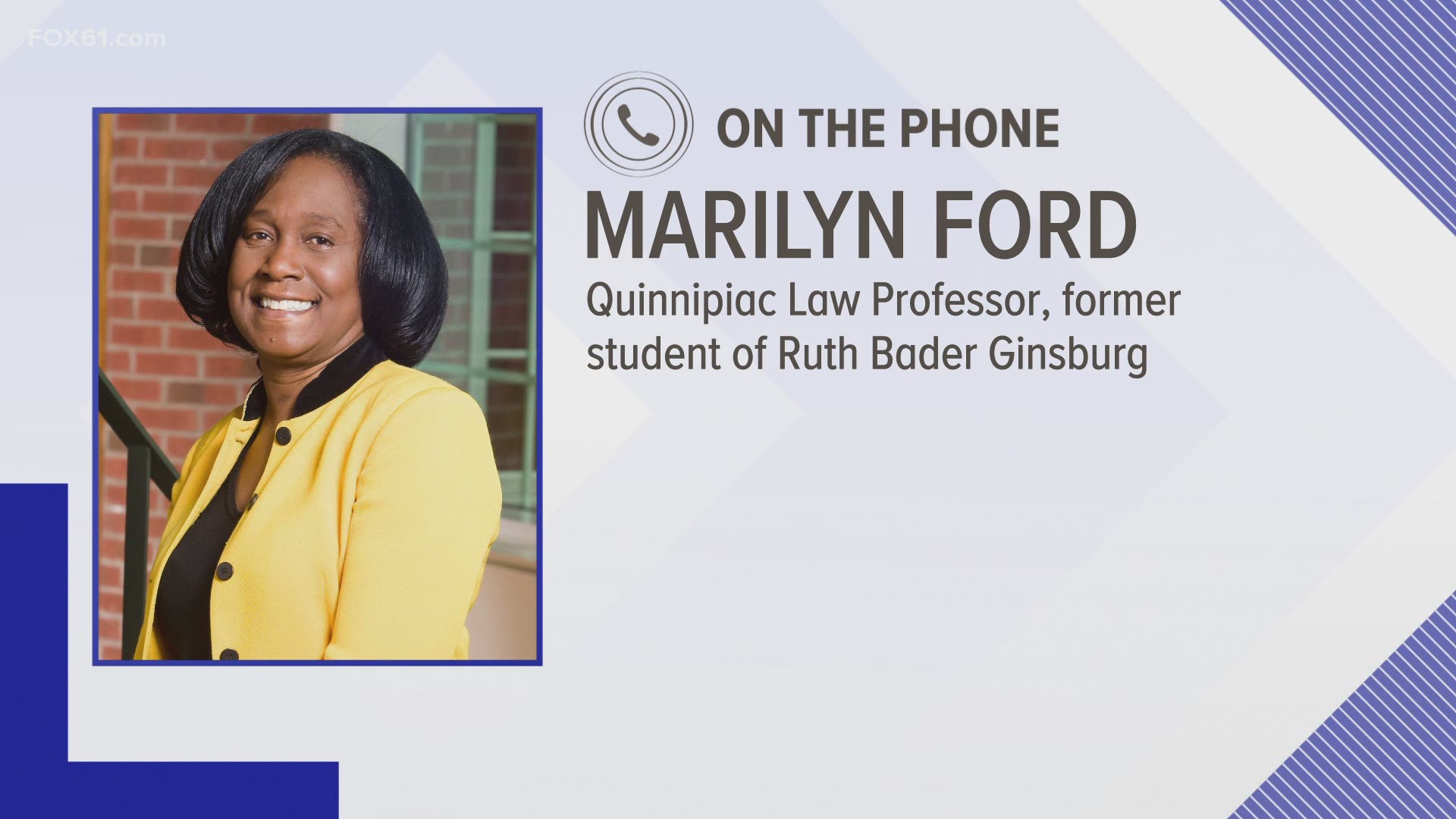 Justice Ruth Bader Ginsburg was a trailblazer who fought each day for the American people and in her own battles with cancer. As the second woman to ever serve on the Supreme Court, her contributions to justice and equality for all will never be forgotte… https://t.co/ieHJiG0vQa pic.twitter.com/pmypnJm219

The co-chairs of the Women's Bipartisan Women's Caucus issued the following statement on the passing of Justice Ginsburg:

"On behalf of the Bipartisan Women's Caucus Co-Chairs State Representatives Dorinda Borer (D-West Haven) and Rosa Rebimbas (R-Naugatuck) express their sympathies and send their prayers to the family members of the Honorable Ruth Bader Ginsburg.  Justice Ginsburg was a champion and pioneer for women's issues such as gender equality and women's rights. Her courage and resolve paved the way for many others to follow. Her death is a great loss to the entire country.  Thank you, Justice Ginsburg, for your remarkable service and dedication to the judicial system and for inspiring so many young women.”