A senior warning sign for Trump: 'Go Biden' cry at The Villages

The shift in older voters appears to be driven largely by Trump’s handling of the coronavirus, which affects these voters more acutely. 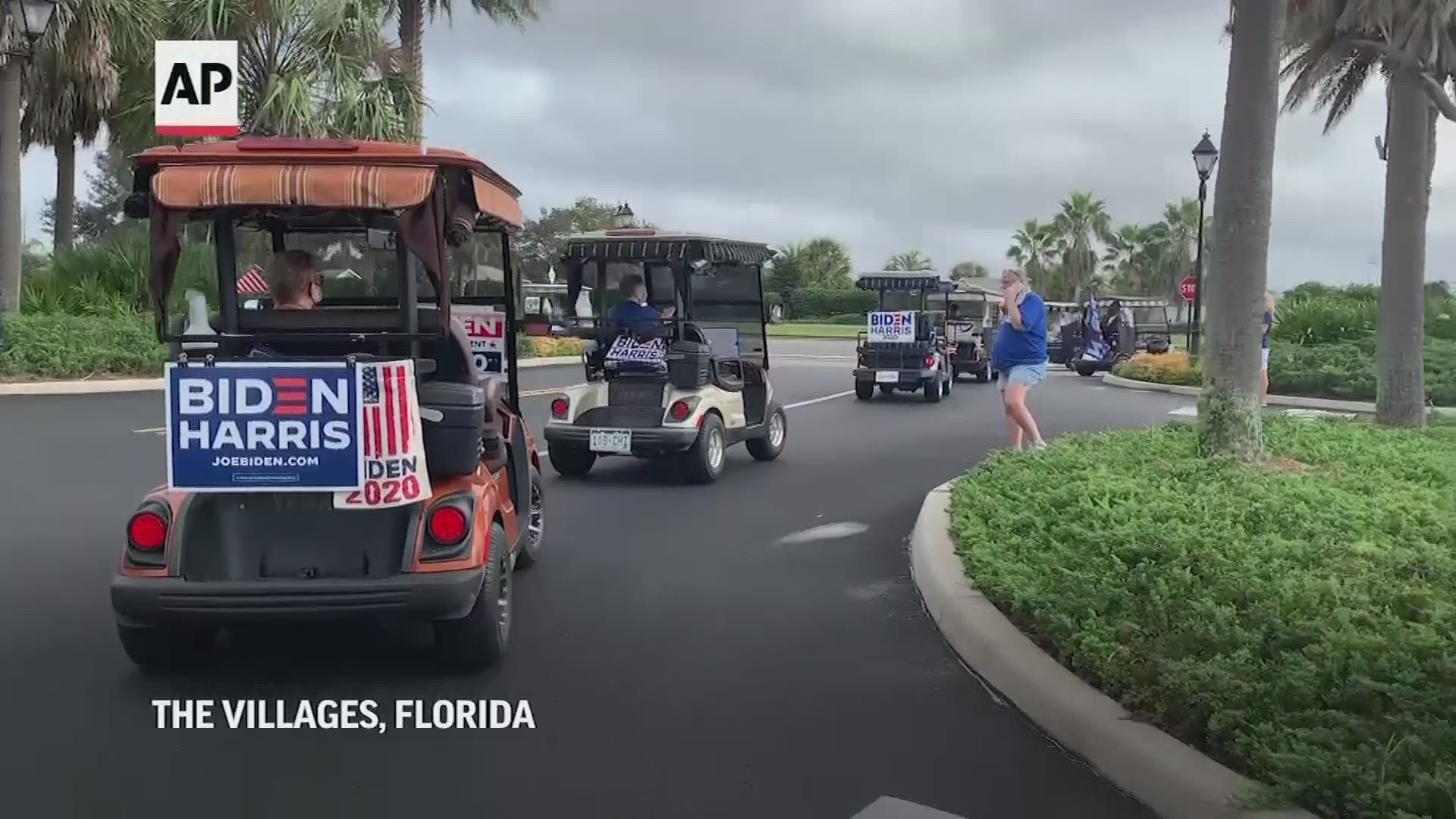 THE VILLAGES, Fla. — Sara Branscome’s golf cart whizzed down the smooth asphalt path that winds through The Villages, the nation’s largest retirement community, an expanse of beautiful homes, shops and entertainment venues that bills itself as “Florida’s Friendliest Hometown.”

Branscome jabbed her left foot on the horn pedal, then gave a thumbs-up to a passing cart.

“This gets you rejuvenated and ready for the next month or so, so we can do this and win. It gives you hope,” the 60-year-old retiree said.

Then she let out a whoop and two surprising words: “Go Biden!”

It’s not a cry that might be expected to resound in The Villages, and it’s certainly not one that is encouraging to President Donald Trump. Older voters helped propel him to the White House — the Pew Research Center estimates Trump led among voters 65 and older by 9 percentage points in 2016 — and his campaign hoped they would be a bulwark to cement a second term.

Pew estimates that nationwide, nearly 1 in 4 eligible voters will be 65 and older. It’s the highest level on record, going back to 1970.

But there have been warnings that older voters are in play. Trump’s campaign has seen a drop in support among older adults in its internal research, according to campaign aides, and some public polls suggest Democrat Joe Biden is running ahead or just even with Trump.

Mostly, it seems, older voters have been put off by Trump’s handling of the coronavirus, which affects these voters more acutely than others.

The president has tried to shore up his popularity with older adults. He has emphasized themes of law and order, and has warned that Democrats would preside over a sundering of the suburbs. He has promoted his prescription drug policy. And he has kept up steady visits to Florida — after Maine, the state with the oldest population — and advertised heavily there.

On Thursday, the president released a video of himself standing on the White House lawn in which he called older adults “my favorite people.” Noting that they are vulnerable to the virus, he asserted with no basis in fact that a medicine he said he was given in the hospital would be free to older people.

But whatever improvement he saw is now in jeopardy. The president’s own COVID-19 infection has refocused attention on the virus and his handling of it. If the 74-year-old Trump can’t safeguard his own health, some wonder, how can he be trusted to protect other older people who are far more vulnerable?

On Wednesday, the scene in The Villages underscored that belief. An armada of as many as 500 golf carts gathered at the Sea Breeze Recreation Center to caravan to the nearby elections office, so folks could drop off ballots for Biden.

If the slow moving, four-wheel, golf cart show of force is an indication of growing allegiance to the Democrat among the retiree set, it would represent a substantial shift.

Susan MacManus, a University of South Florida distinguished professor of government and international affairs, said The Villages and its powerful voting demographic have become less Republican over the years because of an influx of more liberal people from the Northeast.

She’s seen research that shows a softening in Trump’s older base, both nationally and in Florida — especially with women.

“That’s the group that’s leaving Trump,” she said. “And it’s because of his demeanor, more than his policies. For older women, especially. They went through the battles. They frankly do not appreciate the demeaning of women. More than that, they’re thinking of their children and their grandchildren.”

Indeed, at The Villages, many of the people riding in golf carts are women like Branscome.

Florida has been slammed by the virus, but no other demographic has been affected more than older people. About 93% of Florida’s 15,100 deaths from the virus have been people 55 and older, and many are scared — and enraged.

“The whole virus thing has hit really hard here,” said Branscome, who pointed out that almost everyone in The Villages moved there from somewhere else. “We can’t go see our families because of COVID. I’m not seeing an end to it. There is no plan. Biden has a plan. He wears a mask. It gives us hope.”

To be sure, Trump still enjoys strong support among older adults.

Judy Wise, a 75-year-old retiree in Plant City, a town east of Tampa on the Interstate 4 corridor, said her niece hasn’t spoken to her in years, since a fight over Trump. Wise is a stalwart supporter, and her niece is not.

“It’s not so much about the man, but the ideology,” Wise explained. She’s convinced that Biden and the Democrats have a “plan to unseat capitalism” and that he will be a “puppet” of House Speaker Nancy Pelosi, progressive Democrat Rep. Alexandria Ocasio-Cortez, and Biden’s running mate, Sen. Kamala Harris.

Wise believes in small government and lower taxes, and she’s worried about the summer’s recent nationwide protests, a few of which have turned violent. She recognizes that Trump can be abrasive, but it doesn’t bother her.

Pamela Allen, 72, supported Trump from the time he came down the escalator in Trump Tower in 2015 to announce his candidacy. Every few weeks, she waves Trump flags on the roadside of her Tampa suburb of Holiday with a group of other Republicans.

“I love him. I think he’s doing a great job. He’s addressing the situations of everyday people’s normal everyday concerns,” she said. “He’s keeping his promises, with little to no help from the media or the Democrats. There is no positivity on anything he does.”

As for the pandemic, she does think it’s serious for older adults, but “it may be blown out of proportion.”

“I don’t believe the numbers they’re posting about deaths. I wash my hands. I wear my mask. I avoid getting very close to people I don’t know,” she said.

Professor MacManus cautions that while some older voters have gravitated toward Biden, there are many others like Allen and Wise who are firmly in Trump’s corner.

“They’re still probably leaning more towards Trump. But in Florida, you look at margins,” she said. “He won the senior vote in Florida by double digits in 2016. And now we’re showing single digits in polls. Any bleeding of any cohort is a red flag for that candidate.”

And in this week’s golf cart caravan, the Biden flags were blue.