We look at points made by the new Georgia representative and if those claims are accurate. 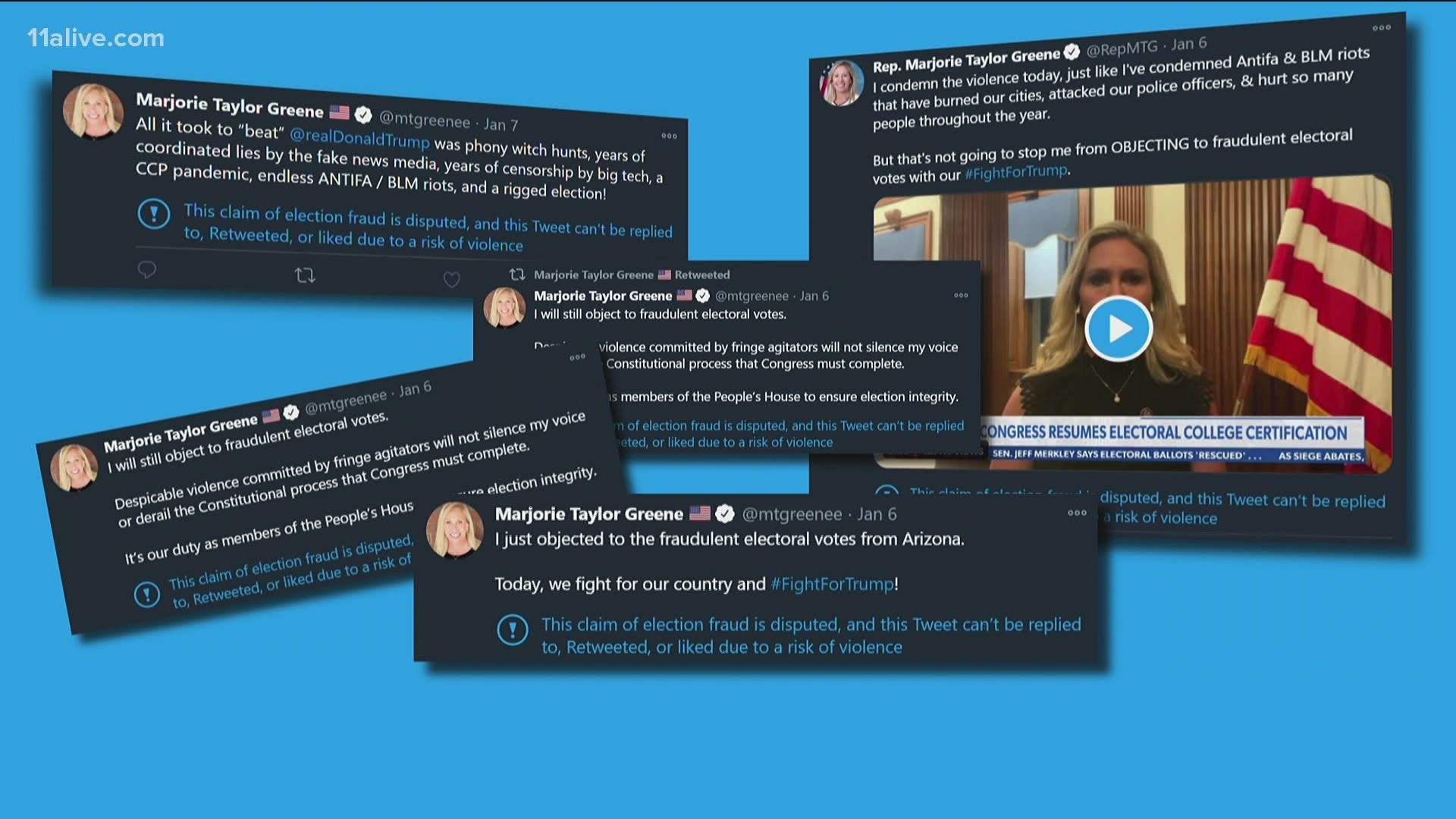 ATLANTA — On Sunday, 11Alive invited the two newest members of Congress on to our political show, 'Decision Georgia.' Both Democrat Carolyn Bourdeaux and Republican Marjorie Taylor Greene accepted our invitation for a live interview.

Greene made several claims to 11Alive, many of which had been debunked.

Claim: "[President-elect Joe Biden] admitted on video that he was willing to withhold $100 billion in foreign aid just to get his way to help his son Hunter Biden with Burisma and Ukrainian energy companies."

Fact-checking: USA Today has already debunked the claim that he threatened to withhold aid in order to help his son. According to NBC News, Ukrinform published a statement from the National Police that said it found no evidence of wrongdoing.

Notes:  There are reports of a probe into Hunter Biden's taxes and his dealings with China. But no known conclusion has been publicly released.

Claim: Greene intends to call for the impeachment of President-elect Joe Biden.

Fact-check: The Constitution grants Congress authority to impeach and remove the President, Vice President, and other federal “civil officers” for treason, bribery, or “other high Crimes and Misdemeanors.” Impeachment is one of the various checks and balances created by the Constitution, and it serves as a powerful tool for holding government officers accountable. The impeachment process entails two distinct proceedings carried out by the separate houses of Congress. First, a simple majority of the House impeaches—or formally approves allegations of wrongdoing amounting to an impeachable offense. The second proceeding is an impeachment trial in the Senate. If the Senate votes to convict with a two-thirds majority, the official is removed from office. Any member of the House can make a suggestion to launch an impeachment proceeding, but it's up to the House Speaker to determine whether or not to proceed. Democrats control the House, making it almost certain any effort would go nowhere.

Claim: "They mailed out millions of mail-in ballots to anyone and everyone who requested one."

Fact check: Under Georgia law, any voter may request an absentee ballot up to 180 days prior to Election Day. No-excuse absentee ballot voting was passed by the Georgia legislature in 2005 and signed into law by then-Gov. Sonny Perdue. For years, the provision was used by between 5 percent and 7 percent of Georgia voters, with maximum absentee ballot turnout lower than 300,000 total ballots cast. Such a small percentage of absentee ballots was difficult but manageable for county officials.

According to the secretary of state, more than 1.3 million absentee ballots were cast in this election due to the pandemic.

The state did mail out absentee request forms to all voters for the June primaries at the height of the COVID-19 pandemic, but they did not repeat taking that step in November.

Source: Georgia Secretary of State wants to get rid of no-excuse absentee voting

Claim:  "[The state] used Dominion machines that are hooked up to the internet."

Fact check: Dominion has repeatedly stated that is not the case. They said: "Voting systems are, by design, meant to be used as closed systems that are not networked (meaning not connected to the Internet). It is technologically impossible to "see" votes being counted in real-time and/or to "flip" them."

Claim: "Even Democrat senators, in 2019, [said] that these Dominion machines can be hacked and set up for election fraud."

Fact check: Senate Democrats Elizabeth Warren, Amy Klobuchar and Ron Wyden along with Rep. Mark Pocan did send letters to three private equity firms that have investments in election technology raising concerns about vulnerabilities and a lack of transparency in the election technology industry and condition of the equipment.

Of the three, Staple Street Capitol Group was said to invest in Dominion.

The letter does raise concerns of "vote-switching" in at least one case and the risk of being hacked due to vendors who the legislators claim, have "skimped on security in favor of convenience." However, this information and these concerns are included in the letters to each of the three private equity firms, and the accusations regarding the machines were not specific to any one company in it.

In the case of "flipped" votes, the letter cites a Vice article on general election troubles from 2018. That, in turn, cites a story from 11Alive's sister station, WLTX. The station spoke with the Richland County election director who described any possible votes that were switched were likely the result of a calibration issue - not a hack.

In Georgia, there was, however, some contention from experts about the new machines when they were first being debated.

There has been no evidence in recent elections, however, that a hack has actually occurred.

Claim: "There's been no forensic audit."

Fact check: In Georgia, the presidential votes were counted three times, including an automatic audit and full hand count of the ballots.

A Georgia Bureau of Investigation audit of the election in Cobb County also looked at 10 percent of absentee ballots and found no fraudulent ballots - but did find two ballots with errors.

Claim: "Georgia taxpayers and voters signed, at risk of perjuring themselves in a court of law, saying that they saw voter fraud and they've been ignored."

Fact check: All claims have been addressed by the courts - and the courts have thrown out the lawsuits.

Claim: "Republicans all over have denounced the violence all over the nation with Antifa, BLM all year long and we denounce the violence that happened at the capitol. It was shameful."

Fact check: Antifa was not linked to protests last year.