The 9 victims in the helicopter crash that killed Kobe Bryant

The victims killed in Sunday’s helicopter crash included young athletes, mothers, a baseball coach, and a helicopter pilot who taught others how to fly. A...

Nine people were killed Sunday when a helicopter crashed near Los Angeles.

The victims included basketball legend Kobe Bryant, who was scheduled to coach a girls’ basketball game that afternoon. Bryant’s daughter, Gianna was also on board, along with other parents and players from the team.

Friends and family have identified the victims of the crash. It is expected to take several days to recover the remains before official identifications can be made by authorities.

Here is what we know about the nine people who died in the crash.

Bryant was an 18-time NBA All-Star, two-time Olympic gold medalist and won five five championships. Considered among the greatest basketball players, Bryant played 20 years as a Los Angeles Laker and was the league’s 2008 MVP. He also won an Academy Award in 2018 for his work in “Dear Basketball,” an animated short film about his relationship with the sport.

Bryant’s 13-year-old daughter Gianna was the second oldest of his four daughters. Bryant described his daughter as “something else” in an interview with the Los Angeles Times and said she was determined to play for the WNBA one day. She played on a team at the Mamba Sports Academy coached by her father. 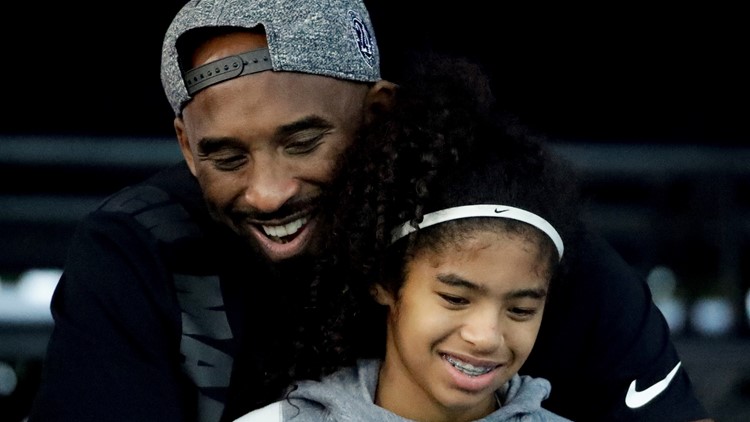 FILE – In this July 26, 2018 file photo former Los Angeles Laker Kobe Bryant and his daughter Gianna watch during the U.S. national championships swimming meet in Irvine, Calif. Bryant, the 18-time NBA All-Star who won five championships and became one of the greatest basketball players of his generation during a 20-year career with the Los Angeles Lakers, died in a helicopter crash Sunday, Jan. 26, 2020. Gianna also died in the crash. She was 13. (AP Photo/Chris Carlson)
AP/AP Photo/Chris Carlson

John Altobelli was a baseball coach at Orange Coast College. His brother, Troy, who is the sports information director at the college, confirmed Altobelli was one of the victims on board. Altobelli’s wife, Keri, and daughter Alyssa were also on board. Alyssa played on the same basketball team as Bryant’s daughter Gianna.

.”Alto was one of the best men I’ve ever met,” said Nate Johnson, the Orange Coast College baseball team’s associate.” Johnson spoke at the college’s baseball field Sunday, according to the Los Angeles Times. If your son played for him, he treated him like a son. If you coached for him, he treated you like a brother. If you worked for him, you were part of his family. I don’t know what else to say. I don’t have the words.”

It is with a shattered heart that we announce the passing of longtime head baseball coach John Altobelli, who died on Sunday in a helicopter crash, along with his wife, Keri and youngest daughter, Alyssa. https://t.co/3fjndZDzXD pic.twitter.com/cWFch9H4SV

“My kids and I are devastated. We lost our beautiful wife and mom today in a helicopter crash. Please respect our privacy. Thank you for all the well wishes they mean so much,” Matt Mauser wrote.

He spoke to TODAY and said more than anything right now, he’s “scared.”

“I’m scared, I think, more than anything… She was warm. She was incredibly bright.” Matt Mauser, husband of Christina Mauser, who is one of the victims in LA-area helicopter crash, remembers his wife and their friend Kobe Bryant pic.twitter.com/qhohGVzeGl

“This devastating tragedy gets worse by the hour,” she wrote. “So much pain for so many local families. Our hearts are broken & grieving for the families impacted.”

I just learned that our amazing Matt Mauser of TiajuanaDogs lost his wife Christina in the crash. She coached the girls team. This devastating tragedy gets worse by the hour. So much pain for so many local families. Our hearts are broken & grieving for the families impacted.

Ara Zobayan was piloting the helicopter at the time of the crash. One of his students, Darren Kemp, told the Los Angeles Times Zobayan was a dedicated and caring instructor.

Jared Yochim, a friend and fellow pilot, posted a tribute to Zobayan on Facebook.

“The loss is not mine, but a community really. Ara impacted so many people and only in a positive way. I’m sorry that you never got to meet him. You would’ve loved him, I promise,” Yochim wrote.

Friends have identified the pilot as
Ara Zobayan. He taught aspiring heli pilots to fly and was very much loved in the aviation community. They wrote “rest easy as you take your final flight to heaven.”@KTLA #KobeBryant pic.twitter.com/8pQh9eNJTk

Sarah Chester and her daughter Payton Chester were also on the helicopter at the time. Todd Schmidt, a former principal at the Elementary School Payton attended, Harbor View Elementary said the Chesters were “engaged, supportive, encouraging, and full of mischief and laughter in a Facebook post.

“While the world mourns the loss of a dynamic athlete and humanitarian, I mourn the loss of two people just as important…their impact was just as meaningful, their loss will be just as keenly felt, and our hearts are just as broken,” he wrote.

Payton’s grandmother told NBC News that they usually drove by car but “they had to get on the helicopter as a convenience today.”

In addition to Kobe Bryant and his daughter, Gianna, @CBSNews has identified the other victims of the deadly helicopter crash in California: