VERIFY: The FDA had a problem with Purell’s advertising, not the hand sanitizer

The FDA’s letter about one brand of hand sanitizer is in the news. But some headlines are misrepresenting what the FDA said. VERIFY broke down the claims....

It’s the middle of flu season and many people are turning to hand washing and hand sanitizers to make sure they do all they can to avoid getting sick.

However, some headlines are producing confusing claims about hand sanitizers.

Some suggest the Food and Drug Administration said Purell hand sanitizers aren’t effective in fighting viral illnesses. Others claimed Purell was being accused of false advertising.

The FDA tells Purell to stop claiming it can prevent Ebola https://t.co/ZFvRbP0Ywq

So what’s the truth? Are hand sanitizers useful in keeping yourself healthy?

No, the FDA told Purell that they can’t prove their sanitizer prevents illnesses and diseases -- and that they need to stop making those promises on their products.

The FDA did not say anything directly about whether hand sanitizers are an effective way to combat the spread of germs.

The confusion arises from a warning letter the FDA sent GOJO, Purell’s parent company. The letter tells the company to stop claiming their products can prevent the spread of viruses like ebola, norovirus, influenza and more in online advertising.

Their reason? GOJO can’t back that up.

Essentially, the FDA told GOJO that there aren’t any adequate scientific studies at this time to support that their product fights the spread of these viruses.

Stating Purell fights viruses also puts the product into the area of drugs, which the FDA regulates strictly. GOJO could not keep the claims unless they wanted Purell hand sanitizer to be labelled--and regulated--like a drug.

The FDA listed examples in the letter including the following claims VERIFY pulled from Purell’s site. 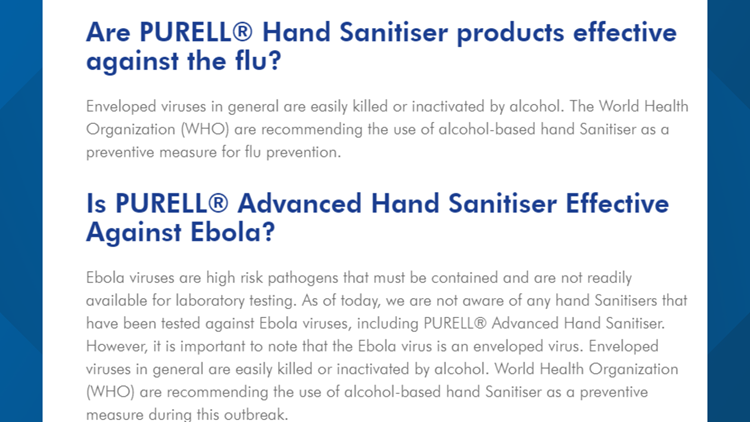 A screenshot of claims made by Purell that their hand sanitizers prevents the spread of ebola and the flu.
VERIFY

GOJO has already removed some of the specific claims the FDA found as problematic. The current page for PURELL Professional Advanced Hand Sanitizer Foam no longer lists specific illnesses the hand sanitizer kills, which the page did before. Their current FAQ page doesn’t mention the product’s effectiveness against norovirus, ebola or the flu, which it did previously.

“It is our responsibility to ensure that we comply with all requirements of FDA regulations and federal law, and we take that responsibility very seriously,” a GOJO Spokesperson told VERIFY. “To that end, we have begun updating relevant website and other digital content as directed by the FDA and are taking steps to prevent a recurrence."

The FDA letter doesn’t mean hand sanitizers are useless. The CDC states that washing your hands with soap and water is the best way to get rid of germs in most instances, however hand sanitizer that contains at least 60% alcohol could be an alternative if soap and water aren’t available. The product should say it's alcohol percent on the label.

Nonetheless, the CDC notes hand sanitizers do not get rid of all types of germs and they may not be as effective on hands that are visibly dirty or greasy. They also warn hand sanitizers don’t remove harmful chemicals like pesticides and heavy metals from hands.

While it’s a too much for hand sanitizers to claim they can prevent specific viral illnesses, the products are still better than nothing when soap and water aren’t available.