VERIFY: Who controls the National Guard and how are they deployed?

DC National Guard is uniquely controlled by the federal government, and there's a process to how they are deployed. Here's a breakdown. 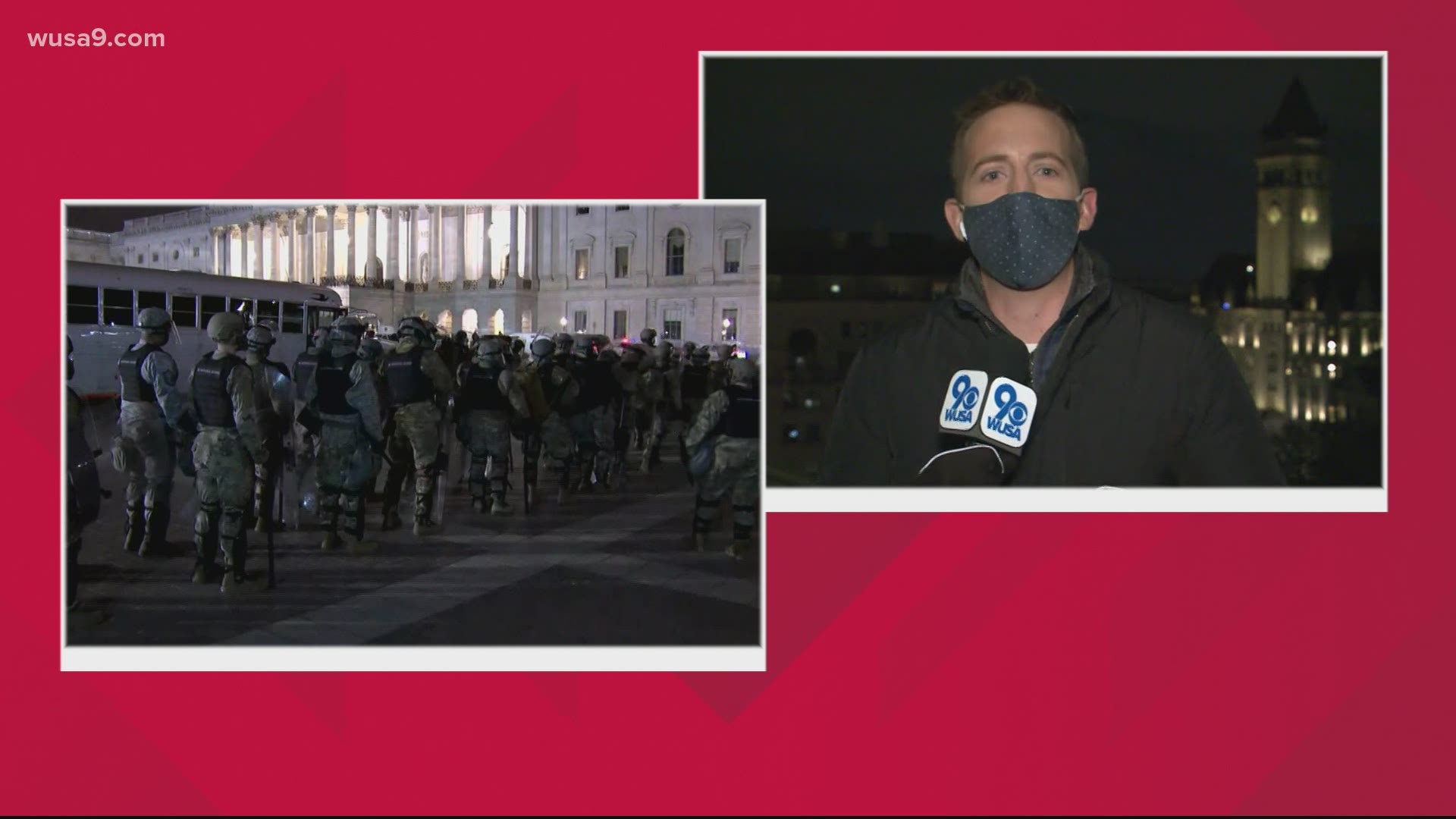 WASHINGTON — Amidst insurrection at the Capitol on January 6, reports emerged that local leaders wanted to deploy National Guardsmen, but that their requests were allegedly being denied by the federal government.

D.C. Council issued this statement via Twitter on January 6:

"Today, the Department of Defense denied a request by Mayor Muriel Bowser to expand the responsibilities of the District of Columbia National Guard so that they would be authorized to protect and restore order at the Capitol Building. That request was denied."

It continued to state that the Council "is in full support of the Mayor's request. We are appalled that this fundamental request was denied. We urge the Department of Defense to reconsider their decision, and to allow the National Guard to restore safety and sanctity to the Capitol, the cornerstone of our Democracy."

Statement from the DC Council on the Department of Defense’s Denial of DC’s National Guard Deployment Request pic.twitter.com/vXjm5WXFpg

Governor Hogan said Thursday that he mobilized Maryland forces, including Maryland State Police troopers and the Maryland National Guard to help, but that his requests were denied by the federal government.

"However we were repeatedly denied approval to do so," Hogan said at a press conference Thursday. "Under federal law the Mayor of the District of Columbia does not have authority over the Guard, and we must receive approval from the Secretary of Defense before we're able to send the Maryland National Guard across the border into the federal city into the District of Columbia." 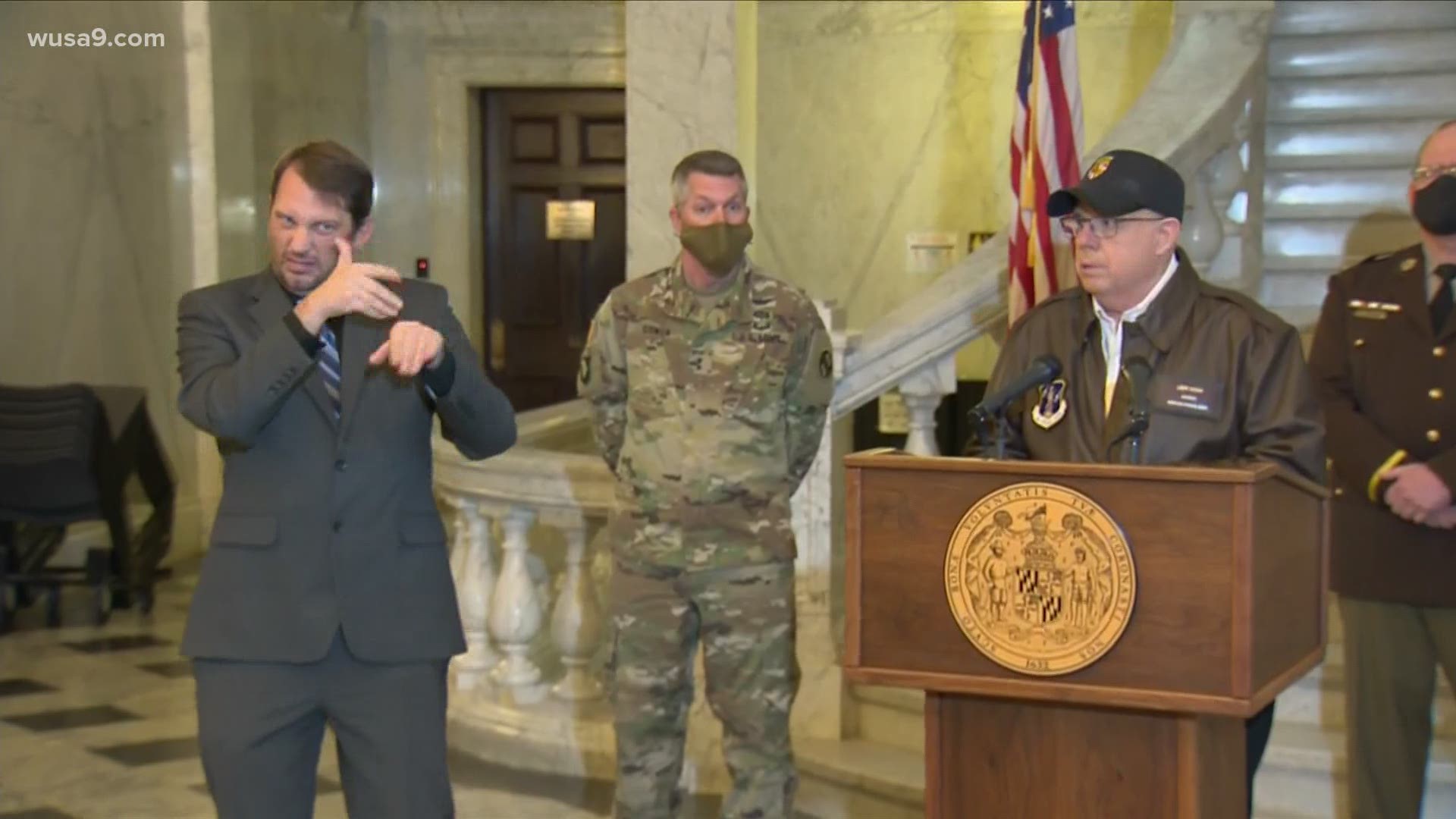 "Approximately an hour and a half later, I got a call on my cell phone from the Secretary of the Army, Ryan McCarthy, who gave us the authority that we needed to be able to move into the city," Hogan said.

Over in Virginia, Governor Northam deployed the commonwealth's guardsmen.

My team and I are working closely with @MayorBowser, @SpeakerPelosi, and @SenSchumer to respond to the situation in Washington, D.C.

Per the Mayor's request, I am sending members of the Virginia National Guard along with 200 Virginia State Troopers.

So who is in charge of the National Guard?

According to the Army National Guard's website, the National Guard serves a dual role, carrying out both state and federal missions.

"For state missions, the governor, through the state Adjutant General, commands Guard forces," they write online. "The governor can call the National Guard into action during local or statewide emergencies, such as storms, fires, earthquakes or civil disturbances. In addition, the President of the United States can activate the National Guard for participation in federal missions."

RELATED: Here's why hundreds of National Guard troops are in DC

According to an Army press release, that's because of the way it's structured, and not until the next day.

Statement on the National Guard Response in the District of Columbia from the Secretary of the Armyhttps://t.co/59PnjPAkyV

RELATED: VERIFY: What does insurrection mean?

"The DoD system is structured to require permission from the Secretary of Defense for out-of-state Guard units to enter the NCR (National Capital Region)" the statement reads in part. "We greatly appreciate the support from the entire National Guard team across the region to respond to law enforcement officers who needed help and we are proud of our Guard members who supported the lead agencies in this mission."

"At Governor Larry Hogan's direction, I have deployed 500 of Maryland's Army National Guard soldiers assigned to the 58th troop command to respond to the crisis in Washington D.C.," Major Gen. Timothy Gowen said in a January 8 media call, saying the troop serves as the "Maryland National Guard's reaction force, and as such, they are well-trained and ready to support missions of this nature."

So is the National Guard still deployed in the District?

Yes, and up to 6,200 of them are sticking around for up to 31 days, according to a press release.

"January 6, Acting Secretary of Defense Christopher Miller approved up to 6,200 National Guardsmen to support civil authorities in the District of Columbia for up to 31 days under Title 32, 502(f) authority," the statement says in part. "Currently the District of Columbia, Maryland, Virginia, Pennsylvania, New York, New Jersey and Delaware will be providing support."

There are about 1,100 DC guardsmen and 500 Maryland guardsmen currently activated.

The National Guard had a call with media on Friday where they said they weren't declining to help or denying requests -- that many troops were already activated and ready to help DC in preparation of the inauguration.

"Most of our soldiers and airman that we were sending to the District of Columbia were already scheduled to go there to provide support for the upcoming presidential inauguration," said Brig. General David Wood with Pennsylvania's National Guard.  "We've done this every four years since 2005."

Do you have something you want our VERIFY researchers to look into? Email the whole team at verify@wusa9.com