Leaves door open for schools to participate in football clubs 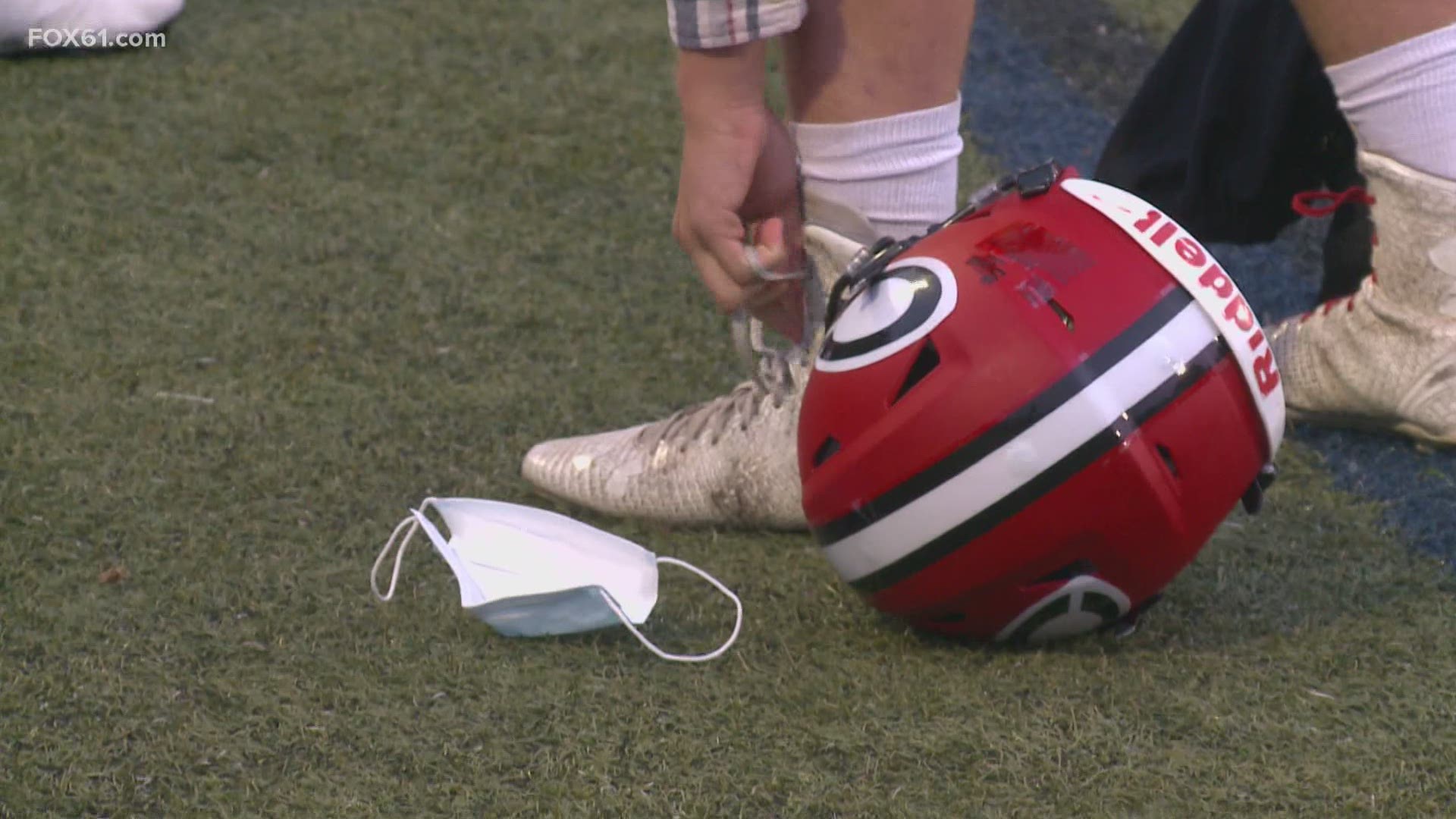 CHESHIRE, Conn. — The CIAC has reaffirmed it's decision earlier this month to cancel full contact football for the 2020-2021 school year.

The action leaves the door open for local school systems to participate in football clubs or play later in the school year. However, they said they had no timeline for making that decision.

They said, "Schools, with approval from their local DPH, may opt to play full contact football as a “club” sport, similar to girls ice hockey, without adherence to CIAC COVID mitigating plans."

The CIAC said, "This decision was made in alignment with the Connecticut Department of Health’s recommendation that football is a high-risk sport and should not be played this fall. The board did, however, agree it would consider allowing competition at a later time for a sport that cannot hold its regularly scheduled season, such as football, provided it does not negatively impact spring sports."

The Connecticut Department of health has recommended substituting “higher risk” athletic activities with “moderate risk” or “lower risk” options and /or postponing those activities to a later time. The CIAC said they would recommend low and moderate-risk football activities in which schools may continue to engage their football athletes later this week.

“CIAC made every effort to weigh all factors in this decision, including the passionate voices of students, parents, and school personnel, and ultimately made the determination to align its decision with the recommendations of the Governor’s office and DPH to not hold high-risk sports at this time,” CAS-CIAC Executive Director Glenn Lungarini stated. “In conversation with other state associations across the country, it was clear that a key factor in playing interscholastic football was alignment with the opinion of their state’s governor and state health agency.”

The CIAC said in a press release, "After consulting with DPH and the National Federation of State High School Associations (NFHS), it was apparent that CIAC’s football plan, though endorsed by the CSMS Sports Medicine Committee, will not sufficiently mitigate the risk to lower the categorization of the sport from “high risk” to “moderate risk.” DPH encouraged CIAC to seek affirmation from the NFHS that its proposed mitigating strategies would meet the standards required to recategorize football from its classification as high risk. CIAC immediately consulted with the NFHS which responded by stating that, “As each state association has its own SMAC and state department of health/health agency, the NFHS SMAC will not exercise approval or disapproval of individual state guidelines.” Furthermore, in discussions with the Connecticut Association of Public School Superintendents (CAPSS), it was made clear to the CIAC that its members are not public health experts and, as such, on the matter of playing football, CAPSS would defer to the appropriate state and local public health authorities."

They continued, "The CIAC is concerned that DPH’s recommendation to postpone higher risk sports to a later time is reserved for CIAC sanctioned interscholastic athletics. In fact, as the CIAC is not sanctioning a football season at this time, schools, with approval from their local DPH, may opt to play full contact football as a “club” sport, similar to girls ice hockey, without adherence to CIAC COVID mitigating plans. The CIAC has previously tried to make DPH and the governor’s office aware of the inconsistency that permits our same student population to engage in non-interscholastic high risk sports with less oversight and fewer COVID mitigating strategies. Furthermore, the CIAC has expressed its concern that this inconsistency promotes an equity in sport opportunities."

In consideration of playing football at a later time, the board seeks to better understand factors such as, but not limited to, the following: