NBA free agency tracker: All the deals from this week 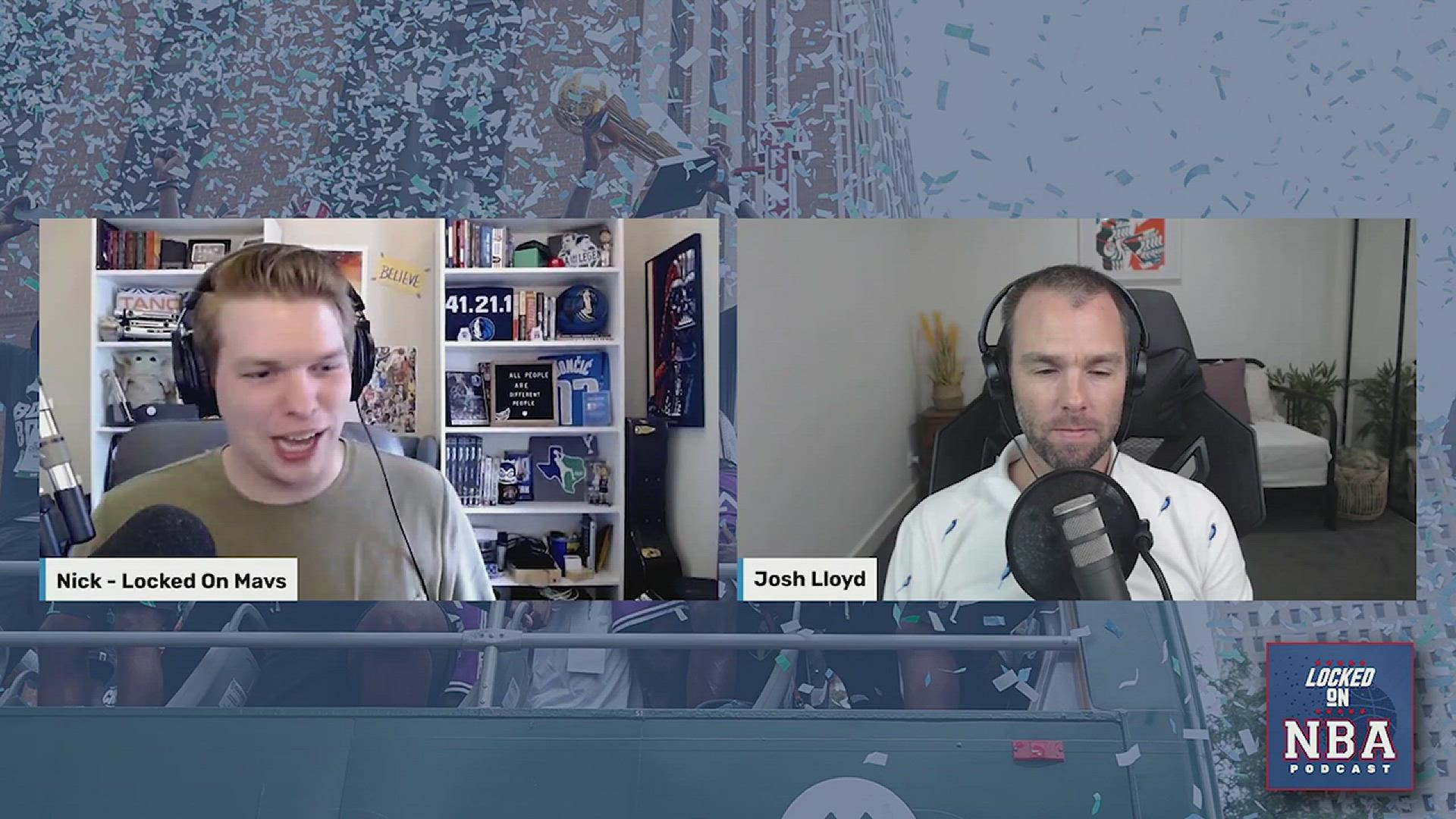 NEW YORK — Just days after the 2021 NBA Draft, the shortened offseason is picking the energy right back up on Monday with the start of NBA free agency.

See our live Locked On NBA live reactions to the reported deals in the first hour of free agency on Monday below:

7:17pm: Khem Birch is returning to the Toronto Raptors on a three-year, $20M contract, per Adrian Wojnarowski.

10:25am: Ishmail Wainright has agreed to a two-year deal with the Toronto Raptors, per Adrian Wojnarowski.

Julius Randle is a Knick for at least three more years! We discuss that and...
-This is a big win for #KnicksCulture
-How much cap room this discount opens up in 2022 and beyond
-Why Randle's success last year wasn't an outlier https://t.co/WBy4x6AZpt

10:00am: Kemba Walker has agreed to a contract buyout with the Oklahoma City Thunder and plans to sign with the New York Knicks, per Adrian Wojnarowski.

9:50am: Restricted free agent John Collins has agreed to a five-year, $125M deal to stay with the Atlanta Hawks, per Adrian Wojnarowski.

11:06pm: Keifer Sykes has agreed to a deal with the Indiana Pacers, per Shams Charania.

10:59am: Sam Dekker, Toronto Raptors have deal in place, per Adrian Wojnarowski.

What a win for OKC. The cornerstone of the Franchise. As Sam Presti would say, ignore the manufactured trade rumors. https://t.co/aaDvAblD6y

11:02pm: Richaun Holmes, Sacramento Kings agree to 4-year deal worth up to $55 million, per Shams Charania.

9:28pm: Devonte' Graham to Pelicans via sign and trade. Pelicans sending first round pick to Hornets, per Shams Charania.

Quick thoughts on the Devonte' Graham sign and trade for the Pelicans pic.twitter.com/Q9oG14HPUj

Alex Caruso??? OK! What else do AKME have up their sleeve for #Bulls free agency? #BullsNation pic.twitter.com/ymgtbdcpjc

I’m so happy Nic Batum is back with the Clippers

I was starting to get a little nervous this wasn't going down but I'm very glad it's done now. 4th year team option is super clutch https://t.co/p7fP95VmTu

Solomon Hill is an elite locker room guy and he can be in the role he was *supposed* to be in this year before the injury carnage happened.

No-brainer for me on the minimum.

Big fan of this. https://t.co/IXc6EUNOkV

is gary trent worth 18 mil a year right now? probably not. is he 22 and one of the best high volume shooters alive already? ya. it’s fine. his vibes are worth like $4 mil at least.

This appears to be using the non-Bird exception (120% of Portis’ 19/20 salary), which would mean the Bucks retain their taxpayer MLE to make additional moves. Best case scenario for Bucks. https://t.co/bbsG8kkmTZ

Harkless was awesome for the Kings after the deadline next season. This is fantastic for Sacramento. https://t.co/7gjOMQdH8S

Really glad they brought him back.

Nwaba gives them a physical, defensive presence on the wing and was a total game-changer once he found his niche off the bench.

6:45pm: Phoenix Suns point guard Chris Paul is reportedly agreeing to stay in Phoenix on a 4-year, up to $120 million deal, per Yahoo's Chris Haynes.

There's the four-year deal that @theIVpointplay discussed this week

Paul gets one last huge deal, but the Suns keep their guy https://t.co/UJ2tZGXjah

Barring a trade, it is going to be impossible for the Pacers to keep Doug McDermott and stay under the luxury tax. Looks like he's heading to the Spurs.

MLE signing. Good fit on the wing, as he showed in the playoffs for Phoenix. https://t.co/dWm35UBHrs

6:38pm: Kyle Lowry reportedly will have a 3-year deal in place with the Miami Heat following a sign and trade, per Adrian Wojnarowski.

reminder that kyle didn’t leave for nothing. he gave the team literally everything, and then was a wise old soul to a young team going through some shit down the stretch. that Lakers game alone was worth hanging onto him. you don’t have to have asset brain for legends.

Also, I thought he was gonna get paid more. 12 million isn't bad at all when you compare it to these other shooters being paid.

The Cleveland Cavaliers and restricted free agent center Jarrett Allen have agreed to a five-year, $100 million contract extension, per sources.

Nuggets running it back. Thought JMyke might take a look at New Orleans but he is coming back to Denver. https://t.co/Q0T8ZGzMNW

6:06pm: Jimmy Butler is expected to agree to a maximum contract extension with the Miami Heat when the league year opens on Aug. 6, per Stadium's Shams Charania.

"There is absolutely no doubt it's going to be a horrible contract at the end of it."

Jimmy Butler is reportedly expected to agree to a max contract extension with Miami on Friday, per reports. @redrock_bball gives his thoughts. pic.twitter.com/EpYCcyvHHF

6:02pm: Mike Conley and Utah Jazz agree to a 3-year $68 million deal, per Shams Charania. Adrian Wojnarowski reported the deal is worth $72.5 million.

Shams Charania reported the deal between Chicago and Ball right as free agency opened at 6 p.m. Ball was drafted second overall in the 2017 NBA Draft.

The Bulls are reportedly sending Tomas Satoransky, Garrett Temple and a second-round pick to New Orleans for Lonzo Ball.

Right as 6 pm ET struck, Lonzo Ball reportedly has a deal in place with the Chicago. pic.twitter.com/aIQxx9IVsz

5:40PM:  Hawks and John Collins reportedly not close on deal

Shams Charania reported prior to free agency opening that Hawks forward John Collins and the team are reportedly not close to a deal to bring the 23-year-old back to Atlanta. Collins is a restricted free agent.

Marc Stein reported about 30 minutes before free agency opened that the Mavericks are expected reach an agreement to re-sign Tim Hardaway Jr. and Boban Marjanovic. Hardaway Jr. is a sharpshooting wing that has been key for the Mavericks in the past two seasons. There was plenty of reported interest from other teams for the 29-year-old, but it looks like the Mavs will hold on to him.

(Written Friday morning, prior to the opening of free agency)

Quick notes: Lowry is an unrestricted free agent. Despite his age (35), Lowry is expected to be one of the most sought after free agents. Reports in the last 24 hours have indicated that the Miami Heat is his most likely destination, but that could change. Lowry is 6-time All Star. He averaged 17 points and 7 assists per game last season in Toronto.

Quick notes: DeRozan is an unrestricted free agent after three seasons with the San Antonio Spurs. The 31-year-old is reportedly being pursued by numerous teams and his landing spot is up in the air as of Monday morning. Reports have linked DeRozan to the Lakers after they traded for Russell Westbrook, but he would have to take a steep pay cut. New York is also a potential landing spot.

Quick notes: John Collins is a restricted free agent after he reportedly turned down an extension offer from the Hawks last season and now the 23-year-old is expected to cash in. Reports indicate Collins is most likely going to sign a new deal with Atlanta, but anything could happen if high-priced offer sheets from other teams roll in.

Quick notes: While Chris Paul chose not to pick up his $44 million player option for next season with Phoenix last week to become an unrestricted free agent, that doesn't mean he won't be back in Phoenix next season. The 36-year-old, acquired by Phoenix prior to last season, helped lead the Suns to their first NBA Finals appearance in 28 years and the first of Paul's career.

Reports have indicated he wants to stay in Phoenix and GM James Jones is confident there will be good news for Phoenix fans regarding Chris Paul. The move to reject the player option just likely sets up Paul to configure a new deal with Phoenix, and maybe one that helps Phoenix with pending extensions and re-signings to keep the Western Conference champion-team together.

Quick notes: While Lonzo Ball is not a top-rated point guard in the NBA, he can provide a lot for any given team and will be a player many teams give a look. The Pelicans have some young guards if they chose not to match an offer sheet out on Lonzo. The Bulls, Hornets and Mavericks have all been reported as interested in Ball.

Quick notes: Drummond is an unrestricted free agent this season after half a year with the Lakers. It's certainly not expected that the Lakers will try to bring back the 27-year-old big man, especially after he was DNP'd in L.A.'s Game 6 playoff elimination against the Suns. But Drummond could be an interesting piece for many teams with his impressive rebounding numbers.

Quick notes: Schroder, 27, is an unrestricted free agent after one season in Los Angeles with the Lakers and it's doubtful he'll be back after the Lakers traded for Russell Westbrook. Schroder averaged 15 points and nearly six assists per game for the Lakers last season.

Quick notes: It's hard to believe Tim Hardaway Jr. will be entering his ninth NBA season next year, but the 29-year-old is now an unrestricted free agent after two and a half seasons in Dallas and he'll be looked at by plenty of teams. Hardaway averaged nearly 17 points per game for the Mavericks last year while improving his 3-point field goal percentage in each of the past two seasons.

Quick notes: It will be interesting to see what happens with Bruce Brown as free agency begins. He played an interesting role on a Nets team with Kyrie Irving, Kevin Durant and James Harden. He was key defensively for the team and also saw a big improvement in his field goal percentage. He's likely to garner some interest. As a restricted free agent, the question will be whether the Nets would match any offer sheets sent his way.