Bowlen trust headed back to court, this time on Kaiser right of first refusal claim

Bowlen companies filed suit asking right of first refusal be terminated because parties involved in 1984 sale agreement, Bowlen and Kaiser, have since died. 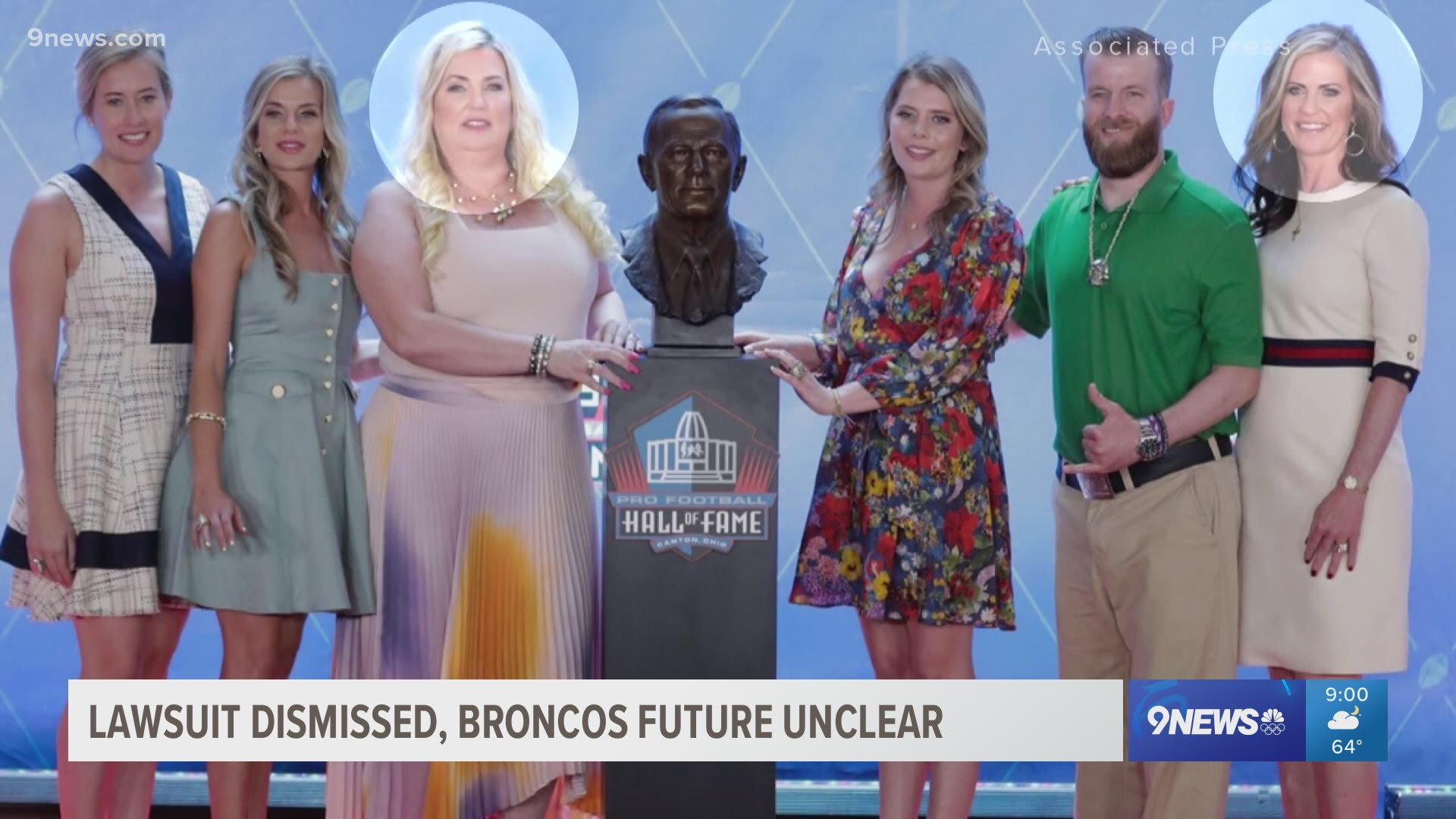 DENVER — While one major legal challenge has been dismissed, another lesser-known court case is ahead.

The trust running the Denver Broncos is headed back to court in September in an effort to clear another legal hurdle that could impede the sale of some or all of the NFL team.

At issue is the position taken by executors of the team’s former owner, Edgar Kaiser, that they have first shot to match an offer if any shares of the team are sold.

The move comes just weeks after the dismissal of a separate lawsuit filed by Pat Bowlen’s two oldest daughters that challenged the validity of the now-deceased owner’s will.

> The video above is about the dismissal of that lawsuit.

The three trustees for the Broncos late owner Pat Bowlen avoided a lawsuit in Arapahoe County Court that was to begin last week when the two oldest daughters, Beth Wallace and Amie Klemmer, agreed to dismiss the case with a promise to no longer contend their father’s amended 2009 estate trust. The two daughters had previously contended their father was not of capacity and was under undue influence when he signed his amended trust in 2009.

In the dismissal order, the court stated the trust is valid and the trustees – Joe Ellis, Rich Slivka and Mary Kelly – have full authority to carry out Bowlen’s trust and estate plan. It is not known if a settlement was reached in return for Wallace and Klemmer agreeing to drop their complaint. Most of the filings in that case have been suppressed and the involved parties and their lawyers have not commented on details of the dismissal.

The Broncos’ hierarchy and their lawyers now turn to a right of first refusal claim brought about by the estate executors of late former owner Edgar F. Kaiser.

According to court documents obtained by 9News, James Kilroy, an attorney representing a company set up by Kaiser, ROFR (Right of First Refusal) Holdings, sent a letter to Slivka, who is both a trustee of the Patrick D. Bowlen Trust and the Broncos’ general counsel.

Wrote Kilroy: “Our client is the holder of any and all Rights of First Refusal and Broncos Interests … referred to and identified in the March 16, 1984 sales agreement between” Kaiser and Bowlen and again when the sales agreement was amended and officially executed on June 1, 1984.

According to a petition filed in court, PDB Sports and Bowlen Sports Inc. state the defendants (Kaiser’s ROFR Holdings corporation) claim of a right of first refusal “created uncertainty over plaintiffs (PDB Sports) in the event of on an intended sale of either the 60.8% general partnership interest that Bowlen originally purchased from Kaiser or of the Denver Broncos’ franchise.”

In other words, it figures to be easier to negotiate an ownership transfer of the Broncos, either to a family member or outside party, if Kaiser’s ability to match any offer were not present.

The case is set for trial Sept. 22 through Sept. 30 in Denver District Court with Judge Shelley Gilman presiding. Lawyers representing PDB Sports Ltd. and Bowlen Sports Inc., Dan Reilly and Clare Pennington, are seeking a ruling from the court that Kaiser’s right of first refusal is no longer valid or enforceable now that both parties to the Broncos’ sale agreement from 1984, Kaiser and Bowlen, have passed away.

This all stems from a right of first refusal that Bowlen agreed to give Kaiser when Bowlen bought a 60.8% partnership interest in the company that owned the Broncos’ franchise (which he renamed from EFK Sports Ltd. to PDB Sports Ltd.) In this right of first refusal, Kaiser would have 14 days after notification of a potential sale by Bowlen to match.

The other 39.2% of the Broncos in 1984 belonged to John Adams and lawyer-friend Timothy Borden of Steamboat Springs.

Like most legal cases, it’s complicated. Adams and Borden had acquired their minority share after Bob Adams, John’s father, passed away. Bob Adams had loaned $10 million to Kaiser in 1981 with the understanding Kaiser would either repay the loan with interest, or Adams could convert the loan to a 39.2% stake in the Broncos.

Bob Adams died a year later and his son John, along with Borden, decided to convert the loan to minority interest in the Broncos. Kaiser’s $10 million-plus debt was erased.

In 1985, Pat Bowlen, along with his brothers John and Bill and sister Marybeth, bought the remaining 39.2 minority interest from Adams and Borden for $20 million.

Kaiser maintained a limited right of first refusal with a provision he could transfer that right to a subsidiary provided certain conditions were met.

Reilly would not comment about the case. The Broncos are currently enveloped within the Patrick D. Bowlen Trust. Its trustees – Ellis, who also serves as the Broncos’ CEO and president; Slivka and Kelly, an attorney – have been in the process of determining whether one of Bowlen’s seven children from his first wife Sally Parker or second wife Annabel Bowlen is fit to become controlling owner of the Broncos. In recent years, the trustees have sent strong signals that Brittany Bowlen, 31, is the child they are grooming for the right to one day replace her late father as controlling owner.

The trustees could also decide it is best for the NFL and the Denver Broncos if the franchise is put up for sale. The value of the franchise is expected to be at least $3 billion with the league’s newfound gambling revenues possibly raising the team’s purchase price significantly. Lawyers representing the entities (PDB Sports and Bowlen Sports Inc.) that own the Broncos want the right of first refusal claim resolved so there is greater clarity when the time comes to transfer controlling ownership of the team to either one of Bowlen’s children or through sale to an outside investor.