There is about a 20% chance for tropical or sub-tropical depression formation next week along the southern Atlantic coast of the U.S. 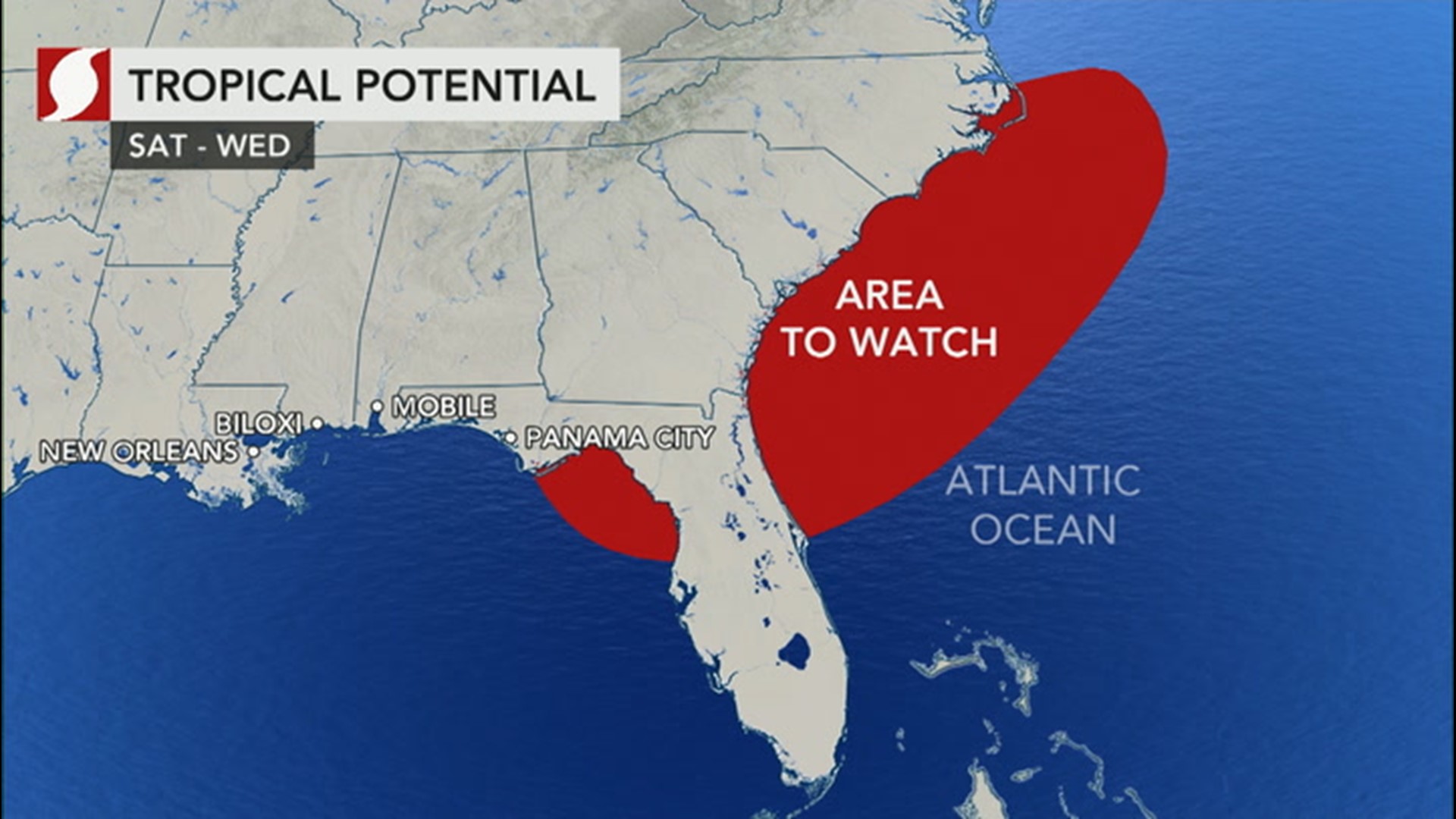 Vast areas of dry air, dust and wind shear will continue to hold back tropical activity over the Atlantic basin in the short term, but there is one trouble spot close to the United States coastline that AccuWeather meteorologists are keeping a close eye on.

"We are homing in on Atlantic waters from northeastern Florida to North Carolina during next week," AccuWeather Senior Meteorologist Randy Adkins said.

"In this zone, wind shear is low and the atmosphere is more moist and largely free of dust compared to much of the rest of the Atlantic basin," Adkins explained.

Wind shear is the change in the flow of air and the increase in the speed of the air at different elevations in the atmosphere and across the horizontal area of the air just above the sea surface. When wind shear is high, organized tropical systems, such as hurricanes, can weaken, and struggling weak tropical disturbances can fail to develop. The presence of dust usually means the air is dry and less likely to allow thunderstorms to form, which could evolve into a tropical system.

A broad area of disturbed weather with showers and thunderstorms from the upper Gulf coast to off the southern Atlantic coast is predicted to ramp up over the next few days then persist into next week.

"One particular complex of thunderstorms that moved through the middle Mississippi Valley on Wednesday is forecast to drop in and add to this disturbed area and perhaps cause a weak storm to form over the northeastern Gulf of Mexico this weekend," Adkins said.

Proximity to land would likely inhibit tropical development initially, but as this feature drifts northeastward and over warm Gulf Stream waters off the Georgia and Carolinas coasts, there is a slightly better chance for a tropical feature to slowly take shape next week.

Because of the low wind shear factor over the northern Gulf this weekend, the chance of tropical development at that time is not zero.

"Wind shear is forecast to increase along the southeastern U.S. coast next week, which would be a deterrent [to tropical development], but the magnitude of that shear will likely be the main factor in determining how strong any system could become, should tropical development take place at all," Adkins explained.

Weighing in all the factors for and against development, there is about a 20% chance for tropical or sub-tropical depression formation next week along the southern Atlantic coast of the U.S. A sub-tropical system is one that has both tropical and non-tropical characteristics, but when a sub-tropical system strengthens enough into a storm, it acquires a name on the Atlantic list.

If an organized tropical system fails to develop, then gusty winds and dangerous surf conditions would not evolve in the region. On the other hand, if a tropical storm were to form, conditions could then quickly deteriorate on adjacent beaches.

Maximum sustained winds must reach at least 39 mph and up to 73 mph to be classified as a tropical storm. A tropical depression is a strong disturbance that has a notable circulation but with winds under 39 mph. Sustained winds of 74 mph are the lower limit of a Category 1 hurricane.

Even in the absence of a tropical depression or storm, the area along the immediate upper Gulf coast and a portion of the southern Atlantic coast will be unsettled this weekend with rounds of drenching downpours and locally gusty thunderstorms. The conditions could spawn a couple of waterspouts. Bathers and boaters in near-shore waters of the Southeastern states should stay aware for changing weather conditions as they go about their ventures.

Another area AccuWeather meteorologists have been closely watching is a zone north of Bermuda, but conditions have become less favorable for tropical development in the past 24 hours.

"It appears there will be just too much wind shear for a feature to develop north of Bermuda in the short term, despite weak non-tropical disturbances moving over those waters into the Independence Day weekend," AccuWeather's top hurricane expert Dan Kottlowski said.

Should the area of disturbed weather along the Southeast coast produce a tropical storm, it would acquire the name Edouard. The next names on the list for the 2020 Atlantic season are Fay, Gonzalo and Hanna.

The earliest fifth-named tropical storm on record since the satellite era of the 1960s and 1970s is Emily from the blockbuster 2005 hurricane season. Emily became a named storm on July 12 and went on to become a powerful and deadly Category 5 hurricane that tracked through the Caribbean.

The 2005 season brought a record number of tropical cyclones, 31, with 27 named tropical storms and 15 hurricanes. Seven of the storms strengthened into major hurricanes of Category 3 or greater on the Saffir-Simpson Hurricane Wind scale.

The earliest sixth-named tropical storm on record in the Atlantic is Franklin, which also came to life during the 2005 season. Franklin formed on July 21, near the central Bahamas, and traveled northeastward, well to the east of the U.S. coast. Franklin did not reach hurricane strength.

Should none of the aforementioned features bud into a tropical system, it is not uncommon for there to be a lull in tropical activity during July and early August after an active spring.

This is due to the usual presence of dry air, dust and wind shear over the equatorial part of the Atlantic basin and a lack of non-tropical systems dipping southward from North America which could evolve into a tropical system.

Conditions typically ramp up during late August and September as the strength of disturbances moving westward off Africa, called tropical waves, tends to peak, combined with water temperatures climbing to peak values for the year.

AccuWeather is projecting a busy season ahead with 14-20 named tropical storms with seven to 11 hurricanes and four to six major hurricanes. Four tropical storms are already in the books for the season, with one U.S. landfall.

Cristobal became the earliest "C" named storm in recorded history for the Atlantic on June 2, a feat that typically does not occur until around the middle of August. The storm went on to crash ashore along the U.S. Gulf Coast, where it unleashed flooding. Dolly was the second-earliest "D" named storm ever in the basin, but it moved out to sea without impacting land.