Tropical Storm Warnings are in effect for coastal locations across the First Coast. A Hurricane Watch has been issued for portions of the Carolinas. 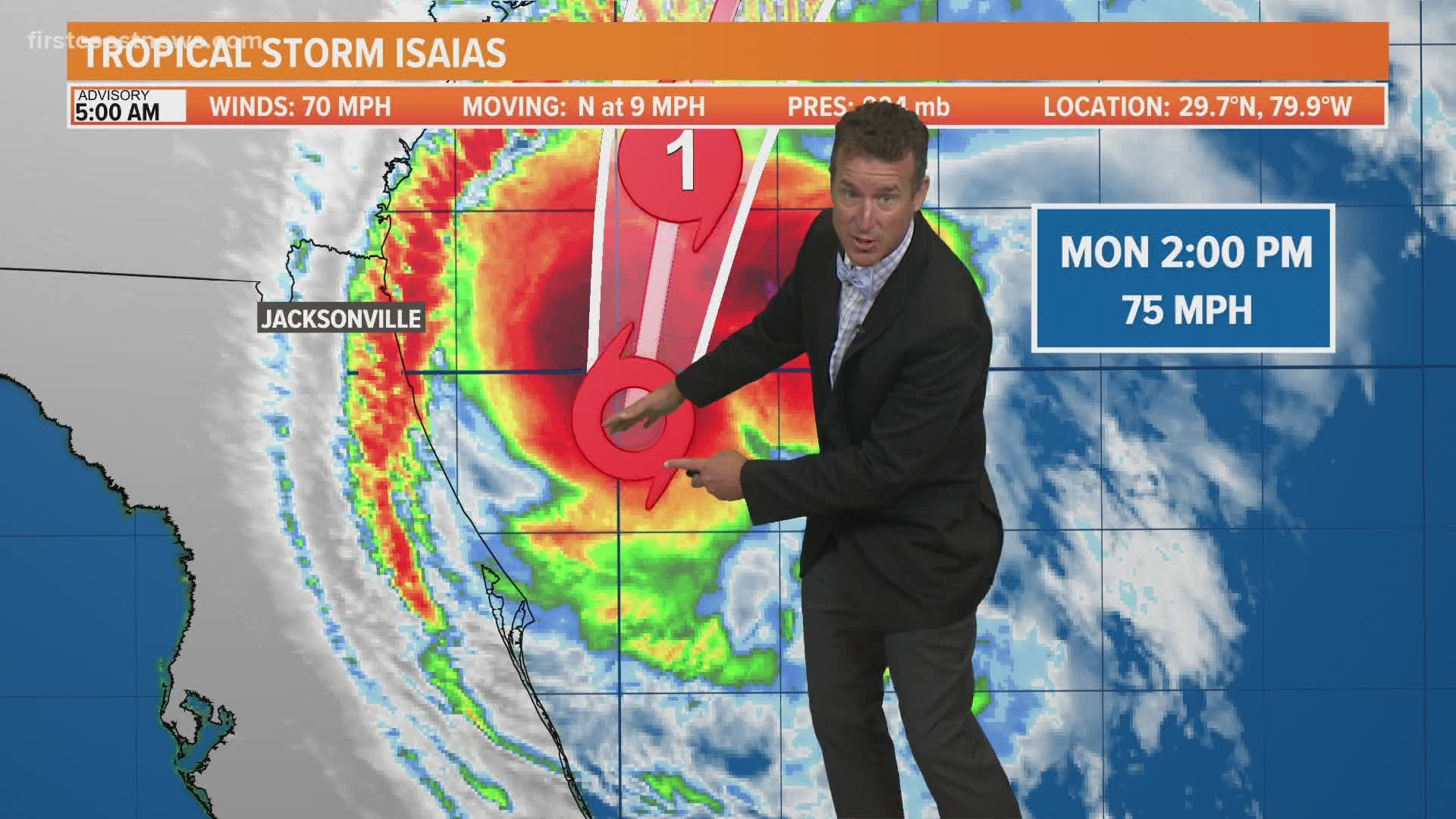 JACKSONVILLE, Fla. — Tropical Storm Isaías has strengthened slightly while moving north-north westward just offshore the east-central Florida coast. It is still a tropical storm and, as of the 5 a.m. National Hurricane Center advisory, it is expected to remain near hurricane strength when it reaches the Carolinas.

As of Monday morning, the storm was about 100 miles southeast of St. Augustine with 70 mph maximum sustained winds.

5am NHC HURRICANE WARNING FOR THE CAROLINAS......ISAIAS WILL PASS EAST OF ST. AUGUSTINE WITHIN THE NEXT TWO HOURS #FCNStorm pic.twitter.com/nH8R58Wqoz

Good News in the 5 a.m. Monday update! We now have #Isaias moving north and sparing us from the worst of the wind and rain. But our friends in the Carolinas need to watch it carefully as it becomes a hurricane by later today. #FCNStorm @FCN2go pic.twitter.com/rctvc5ibwl

For the First Coast, most of the impacts will be felt just after midnight and into the early Monday morning. Expect the onshore wind to continue and pick up, with winds of 30 mph and some isolated gusts to 60 mph along St. Johns & Flagler counties' coastlines. Surge of 1 - 3 feet holds for those vulnerable spots south of Duval and coastal southeastern Georgia. Stay locked in for any changes to our local impacts forecast, a county-by-county breakdown can be found here.

As far as timing goes, the main impacts for Flagler and St. Johns counties will be between 3 a.m. and 9 a.m. Monday. For Duval County, we'll see the gustiest weather move through between 5 a.m. and 11 a.m. Monday. For the southeastern Georgia coastline, think from between 8 a.m. and 2 p.m.

The next complete National Hurricane Center advisory will be at 5 a.m.

SUMMARY OF WATCHES AND WARNINGS IN EFFECT:

A Storm Surge Warning is in effect for...

A Storm Surge Watch is in effect for...

A Hurricane Watch is in effect for...

A Tropical Storm Warning is in effect for...

A Tropical Storm Watch is in effect for...

In addition to Isaías, Tropical Depression Ten developed off the coast of Africa and has already dissipated. There is also another tropical disturbance behind Isaias, but it's expected to travel in the storm's wake and re-curve out to sea. There will be updates as needed. Stay tuned!

As always, stay prepared and tuned to updates throughout the entire Atlantic hurricane season. Remember: it only takes one.

RELATED: Become a forecaster this hurricane season with the First Coast News app