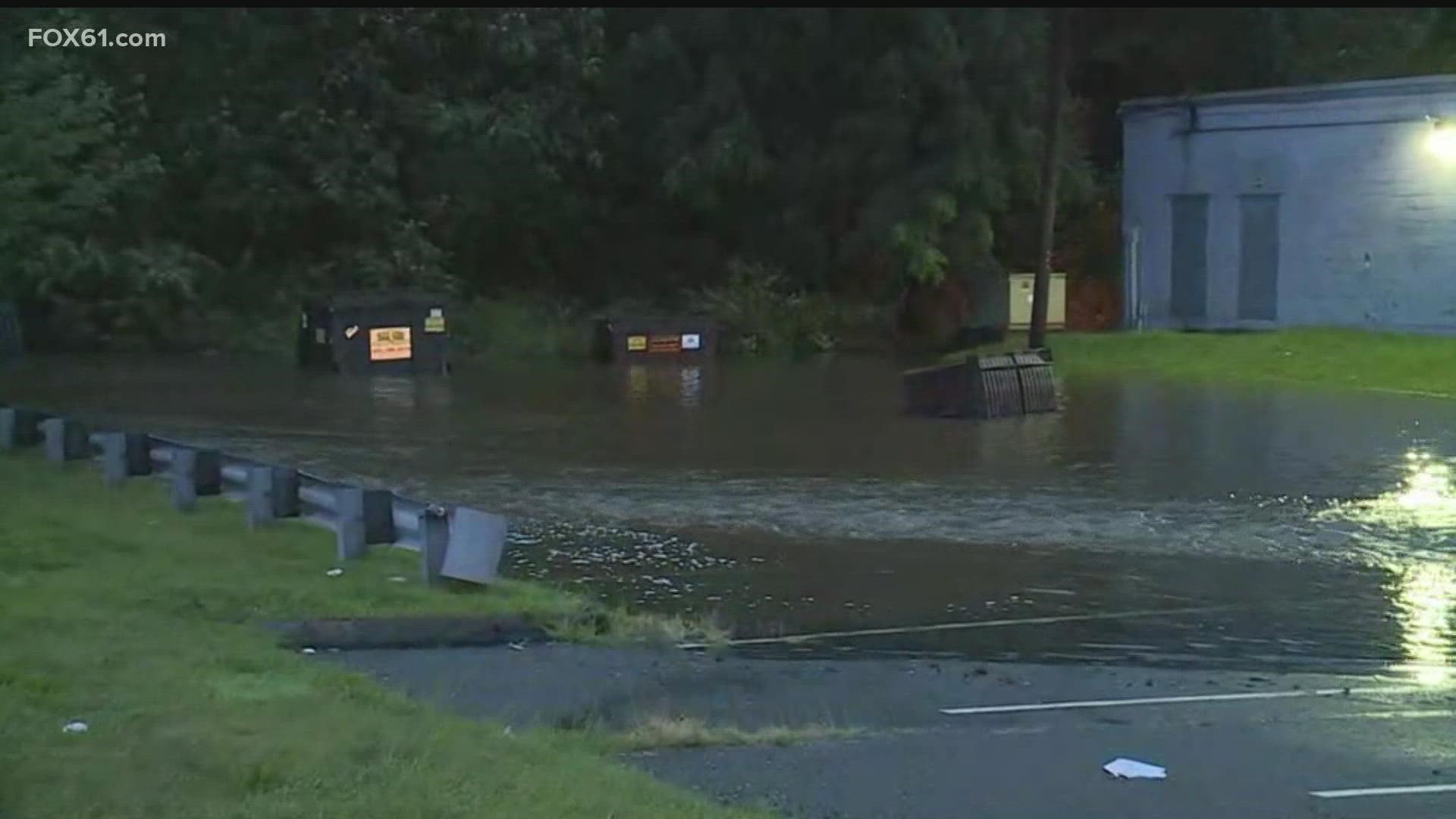 CONNECTICUT, USA — The remnants of Hurricane Ida marched across the state overnight, leaving in its wake several inches of rain and flood warnings.

A flash flood warning is in effect for Hartford, Tolland, and Windam counties until 3:15 p.m.

The rain will continue to taper off as the morning continues. By 6 a.m., Connecticut may be done with most of the rain, and may even see sunshine!

Many reports indicate 3-5 inches of rain were dumped on the state with some localized higher numbers trickling in.

Download the free FOX61 News app to get the most up-to-date information on Ida and its impact in Connecticut. iTunes Google Play

Gov. Ned Lamont declared a state of emergency in response to the widespread flood damage caused by the remnants of Hurricane Ida.

“The filing of this declaration will help provide state and local emergency management officials with the necessary tools to aid the impacted areas in safely recovering from this record-breaking rainfall that we received overnight,” Lamont said in a statement.

Amtrak has canceled service from Washington D.C. to Boston due to flooding across the tri-state area and New England.

SERVICE ALERT UPDATE: All service between Washington (WAS) and Boston (BOS) has been canceled for the remainder of the day. We apologize for the inconvenience.

State police said a veteran sergeant with Troop L-Litchfield was found after he was swept away in floodwaters in Woodbury this morning. He's been taken to Yale New Haven Hospital. Read more details here.

The following roads are closed in Berlin due to flooding:

WOODBURY SEARCH we’ve seen a couple of helicopters in search mode for a person that has been missing since being swept away in floodwaters at around 4 AM. Awaiting an update from @CT_STATE_POLICE @FOX61News pic.twitter.com/3GfwTw3pIw

Route 9 south exit 19 closed due to road collapse according to Cromwell Fire Department.

Images show a flooded Farmington Avenue under the railroad bridge in Berlin.

Eversource advises natural gas customers to be aware of potential hazards from flooding. If you smell gas, leave immediately, dial 911 from a safe place, and then call Eversource at 877-944-5325.

A flash flood warning is in effect for Hartford, Tolland, and Windham counties until 3:15 p.m. according to the National Weather Service.

UConn's Stamford campus will be closed Thursday due to travel difficulties in the area. All online classes will be held as scheduled and employees telecommuting due to COVID-19 will be working as normal.

All other UConn campuses are following their normal schedules for classes and work. UConn hasn’t experienced any significant flooding or water damage issues at any of its locations, the university day.

This is a developing story. Follow the latest updates here.

I-95 south back open in New York by Connecticut border. Delays still heavy into Stamford.

FOX61's Angelo Bavaro reports 28 people had to be evacuated early this morning along Route 6 and Mix Street in Bristol after the banks of the Copper Mine Brook and Pequabuck River overflowed.

Absolute mess right now in Bristol at Route 6 and Mix St. after banks of the Copper Mine Brook and Pequabuck River have overflowed. 28 people had to be evacuated early this morning. @FOX61News pic.twitter.com/q0ZEq52yLW

Bristol Mayor Ellen Zoppo-Sassu urges residents to be patient and not drive through floodwaters as the city cleans up following Ida.

Roads across the state are closed due to flooding issues. See a full list of road closures here.

Well, it sure rained a lot last night. Flash flooding all over the area is still causing problems on the roads this morning. These radar estimated rain totals show how wild things were for several hours overnight. pic.twitter.com/QzZyYvPIGR

I-95 southbound in Rye, New York closes due to flooding, causing backups into Greenwich.

Flooding remains a concern in Norwich as rain departs state. The Yantic River has risen due to the rainfall.

The New Haven Department of Public Works superintendent said crews are working to open the streets up before the morning commute begins.

Rain stopped here on Humphrey st. In new haven. As soon as that happened, the flooding subsided.

The DPW street superintendent is now marking areas where people’s cars got stuck in water.

They want to open the streets back up before the morning commute. @FOX61News pic.twitter.com/M0F99Ffq3p

Lebanon Public Schools will open two hours late with no AM pre-k.

The Yantic River near Norwich is undergoing a rapid rise with a 6 foot rise in about six hours leading to flash flooding.

The Yantic River near Norwich is undergoing a rapid rise at the moment, with a 6+ foot rise in about 6 hours leading to flash flooding. #fox61 pic.twitter.com/rCrkMUIC9t

Massive flooding in Manchester. We are live on ⁦@FOX61News⁩ pic.twitter.com/ieZyyA7SGQ

Flooding reported on I-91 south in Enfield.

There are two flooded sections of the passing lane of I-91 south in Enfield. It’s not terribly deep but not something you want to hit at 60mph. Stay in the middle lane! #ctweather #Ida

A Flash Flood Warning is in effect for Hartford, Tolland, Windham, Middlesex and New London counties until 8 a.m.

A Flood Warning is in effect for Litchfield, New Haven, and Fairfield counties until 7 a.m.

Power outages for both Eversource and United Illuminating are over 16-thousand customers each; well over 32,000 customers are without power across the state.

Street flooding is occurring statewide, with some drastic and dangerous instances in Fairfield and New Haven counties. Meriden Police report extensive flooding in the downtown area, and there are road closures in towns from Windsor Locks to West Haven.

Heavy rain is still falling in Hartford. Stay with @FOX61News as we track #Ida and her impacts. pic.twitter.com/pcJo7DKpyU

Intense wind signature over areas in North Branford, Branford and Guilford heading toward Madison. In this severe warned stormed .. Gusts of 70mph are possible #fox61 pic.twitter.com/qWb9wyvOxk

A Severe Thunderstorm Warning is in effect UNTIL 9/02 12:15AM. Counties included: Suffolk, New Haven, Fairfield pic.twitter.com/2npQCmCcyO

GREENWICH - I-95 Southbound CLOSED between Exits 6 and 5 because of Crash (Motor Vehicle).

WATERBURY - Crash (2 Vehicle) on RT8 Southbound between Exits 30 and 29. The right lane is closed.

Greenwich Police reports the department is unable to accept any 911 calls at this time.

The National Weather Service out of New York reports a Flash Flood Emergency is in effect for parts of Connecticut including Bridgeport, New Haven and Stamford.

This is what a flash flood emergency looks like https://t.co/PrUc1yalcH

Metro North says Hudson, Harlem and New Haven Line service out of GCT is suspended. Customers are advised not to travel if possible.  As more information becomes available we will notify you as soon as possible.

Norwich community concerned Ida will cause Yantic River to flood

VERNON - Route 83/30 CLOSED between West Road and the Manchester town line because of water over the road.

GREENWICH - Crash (Jackknifed) on I-95 Southbound between Exits 3 and 2. The left and center lanes are closed.

"Stay off the roads, stay home, and stay safe," he wrote on Twitter.

We will use every resource at our disposal to ensure the safety of New Jerseyans.

Stay off the roads, stay home, and stay safe.

A Flash Flood Warning is in effect Thursday at 5:30 a.m. for Worcester, Tolland and Windham counties.

A Flash Flood Warning is in effect UNTIL 9/02 5:30AM. Counties included: Worcester, Tolland, Windham Flooding is occurring or may happen any moment. Rivers/streams could rise rapidly. #fox61 pic.twitter.com/G4yDQQmmM1

Due to the heavy rains expected, the State sponsored COVID testing site located at Gateway Community College in New Haven, will be closed on Thursday, Sept. 2.

E. HARTFORD - Crash (2 Vehicle) on RT2 Eastbound between Exits 2 and 5. The left lane is closed.

FOX61's Rachel Piscitelli reports a Tornado Warning is in effect just to the south of Connecticut (not in state).

A rotation detected on the radar in the area of Yankee Stadium.

Tornado warning just to our south (NOT IN CT)... looks like rotation right near Yankee Stadium #fox61 pic.twitter.com/kyMXjyij1D

FOX61's Gaby Molina seeing heavy rainfall and water on the highway in Manchester.

Residents in the area are bracing themselves after Henri hit them hard almost two weeks ago, even crumbling a portion of Ambassador Drive.

The rain is really starting to come down in Manchester and there is quite a bit of water on the highway. Take it easy out there if you have to drive tonight! pic.twitter.com/psVY6ykTKw

A Flash Flood Warning is in effect until 2 a.m. for Hartford and Tolland counties.

Flash Warning issued for Hartford and Tolland county until 2AM #fox61 pic.twitter.com/PaiqHGLvsO

A handful of arriving and departing flights at Bradley International Airport have been delayed.

One American Airlines flight from Philadelphia that was scheduled to land at 10:14 p.m. was cancelled.

A Flash Flood Warning is in effect 10 p.m.

Tornado Watch issued for parts of the state until Thursday at 1 a.m.

A tornado watch has been issued for parts of Connecticut, New Jersey and New York until 1 AM EDT pic.twitter.com/07WbwlYT8A

A tornado WATCH has been issued for our four southern counties until 1AM tonight. A watch means conditions are favorable... Stay weather aware #fox61 pic.twitter.com/bTKBeM1nN3

EAST WINDSOR - Route 191 (Phelps Road) CLOSED at Route 5 (South Main Street) because of a tree down in wires.

A tree is down across the road and it looks like it brought some wires down with it on Phelps Rd. in East Windsor @FOX61News pic.twitter.com/XYuKl4M66X

Hartford Mayor Luke Bronin discusses precautionary efforts in the capital city, urges residents to stay off the roads and move their cars ahead of Ida's significant impact.

The following parking lots are open and available:

Connecticut State Police discuss road conditions and tips for drivers as the state is impacted by Ida.

How Connecticut's shoreline is preparing for the storm

NEW BRITAIN - Tractor Trailer crash on I-84 Eastbound between Exits 35 and 36. The right lane is closed.

EAST WINDSOR - Route 191 (Phelps Road) CLOSED at Route 5 (South Main Street) because of a tree down in wires.

HARTFORD - 3-vehicle crash on I-91 Southbound between Exits 33 and 32. The right lane is closed.

MANCHESTER - Crash on I-84 Westbound between Exits 64 and 63. The 2 right lanes are closed.

With storm after storm dropping copious amounts of rain recently, any semblance of drought is long gone in Connecticut.

Only a few months ago, conditions were so dry that the state nearly fell back into a moderate drought across the state, but that is far from the case now.

It seems like Connecticut has been seeing soaking rainstorms just about every single week. On the shoreline, Bridgeport has picked up 12.31” of rainfall since June 1. Southern Connecticut has seen its fair share of rain as well with the numbers really picking up in northern portions of the state.

TRAFFIC ALERT: Gottier Road by Tolland Stage Road (Route 74) closed due to water over the road.

Drivers are asked to seek an alternative route.

Gottier Rd by Tolland Stage Rd (Route 74) is closed due to water over the road. Please seek an alternative route. pic.twitter.com/VD9dzdY7ws

RELATED: Tips on preparing for flooding from Ida