HARTFORD — Democratic leaders rolled out their agenda for the current session of lawmaking, Monday. Some familiar campaign topics top the list of priorities. “I... 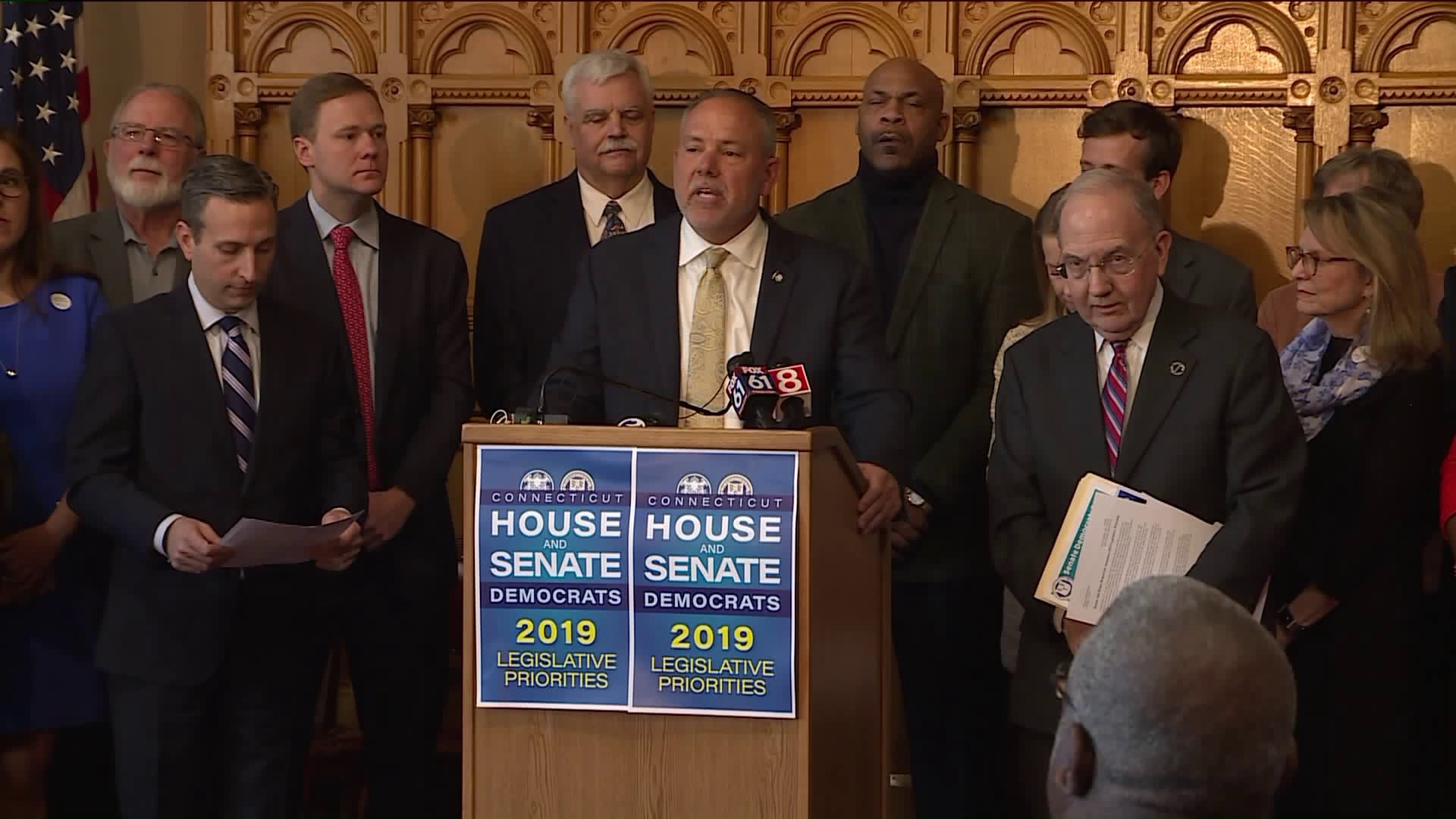 HARTFORD — Democratic leaders rolled out their agenda for the current session of lawmaking, Monday.

Some familiar campaign topics top the list of priorities. “It focuses on establishing paid family and medical leave program as our number 1 priority for the session,” said Sen. Martin Looney.

Democrats say the paid family medical leave bill would be 100% funded through employee payroll deductions. “Have the ability to take care of a sick family member without the fear of losing your job or going so far into depth that you may never come out of it,” explained Speaker of the House, Rep. Joe Aresimowicz.

But CBIA, who looks out for small businesses, says just because it’s employee funded, doesn’t mean businesses won’t take a hit. “But employers are still on the hook to pay for non-wage benefits for all these employees who are absent from the workforce for up to 3 months every single year,” said Eric Gjede, the Vice President for CBIA Government Affairs. House Republican Whip, Rep. Jason Perillo says the devil is in the details. “I’ve seen three or four version about how house and senate Democrats want to roll that out,” he said.

Senate Republican Leader Len Fasano said in a  statement, “Here we go again!  Democrats admitted today that ‘details are still being worked out’ on these proposals. That’s simply reckless and deceptive. Some of these policies may have merit, but we need to see the details.  Once those details are made known, I’m interested in knowing how they can be enacted in a way which doesn’t hurt Connecticut businesses.  And how much do they cost?  And how would they impact people’s paychecks?

Next on the list is raising the minimum wage to $15 an hour. “We are keeping our promises. We want to fight hard, fight smart, grow this economy and make sure we grow the state of Connecticut in a way that brings people to the state,” said Senate Majority Leader Bob Duff.

Fast food worker Kyra Franklin says raising the minimum wage would help her get an education. “Like my kindergarten teacher Ms. Taylor always told me, I can be anything I want to be and since she told me that me dream is coming true by me going to college to pursue becoming a teacher,” she said.

Republicans worry about the trickle down effect. “It drives up prices for everybody,” said Rep. Perillo. Businesses may be open to an a slower more incremental increase. “I think it would be better if they spread it out over a number of years,” said Gjede.

The list goes on. Democrats are pushing for more affordable prescription drugs, a job training workforce pipeline, pushing for a green zero-carbon future, supporting small businesses and amending the constitution to allow early voting. “We’ve got to get serious about the size of government and cutting spending first and foremost,” rebutted Rep. Perillo.

Democrats have a majority and both the house and senate. House Republicans had this same press conference in January where they identified infrastructure improvement and tackling the opioid epidemic as some of their top priorities.